Downloading Aliens is a gen War of the Worlds anthology. 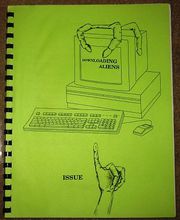 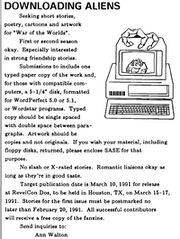 submission request in The Blackwood Project #11, "no slash or X-rated stories. Romantic liaisons okay as long as they're in good taste," the first issue was to be available at RevelCon

Downloading Aliens 1 was published in 1991 and contains 74 pages.

If you're not into War of the Worlds, you might want to skip this review, since Downloading Aliens is exclusively WOTW material. Frankly, it's a very nice little zine, running just under 100 pages. Like another WOTW zine (Green Floating Weirdness), it has a fluorescent green cover (with an alien hand marking off the issue number) while the glued binding is similar to the one used in another WOTW zine (Alien Sushi). The printing is clear and dark, the art reproduction superb.

The issue starts off with a giggle in "What Goes Around Comes Around." The first snow of the season has Harrison Blackwood determined to stage a snowball fight, but Ironhorse is armed and dangerous....

"Elements" is a grimmer story, but probably the best one in the zine. Norton Drake must rescue a badly injured Ironhorse after they are run off the road by aliens. The only problem: they're out in the middle of nowhere and Norton's a paraplegic-and the aliens are out there.

"Thy Soul Shall Find Itself Alone" is both a character piece and an action piece. After a chance encounter orphans a young boy, Ironhorse and Harrison must face their own helplessness and culpability in the death of his parents.

"Greater Love Hath No Man" brings Ironhorse back to The Wall to remember a buddy fallen in combat and face to face with his widow, a widow he couldn't face after her husband's death....

"A Picture Is Worth A Thousand Words" is the last piece and a serious contender for best story. Ironhorse manages to create a new Indian legend and convey his feelings for the rest of the Blackwood team after young Debi asks him to help her draw a Cherokee village.

The four 'compass point' poems manage to convey the character of the four principal characters quite well, though they are difficult to explain in a few words.

Frankly, I couldn't find a clunker in the lot. Ann and Vicki did a superb job of balancing humor and drama in organizing the contents, though I still don't understand why the artwork was kept separate from the stories it obviously relates to. (Maybe a screw up at the printers?) It should have faced the story or been planted in the middle, instead of being on a separate page altogether. [1]