A Small Circle of Friends

You may be looking for the Star Wars zine, A Close Circle of Friends.

A Small Circle of Friends is a gen anthology. It is a multi-media "recycling" zine: authors have taken the plot from one TV series and re-told the tale using the characters from another series. 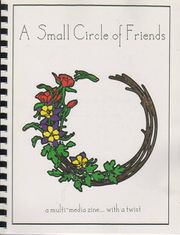 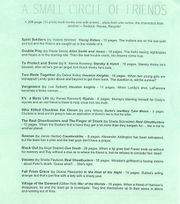 [Blackout]: Blackout' is a 28 page story set during the first season. Ben has to prevent the deaths of many diplomats at a funeral. Unfortunately he has lost his memory and only gets it back in pieces - a real race against time! It's well written and worth buying a copy.[1] 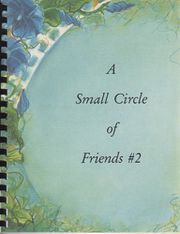 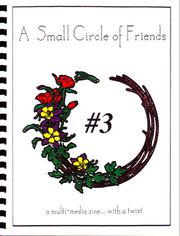 [Honor Thy Father]: ...it's time to look at the Hutchinson side of the family. John Hutchinson has come to Bay City to visit his son and see just what kind of life he's made. First impressions are often full of misjudgements and this is the case here as well. But when he gives his son a second look, what will he really see? [2] 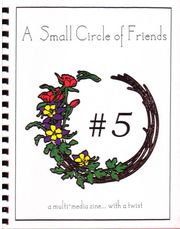 It's been a while since I read every story in one of your multi-media zines - there are usually a couple of fandoms I don't know or care for - but I did this one, and it still was too short! Okay, so I sorta skimmed the Swift Justice one, sorta reading it for the S&H backbone. But what a treat it was to read so much fun stuff. The Houston Knights and Swift Justice maybe stayed a little too close to the S&H script than I'd have liked - when it's scene-by-scene and sometimes line-by-line, it's hard to see the other characters in it instead of S&H. But no quarrels with the writing or the characterization. Good rewrites. I just have to keep reminding myself as I read which one's Lundy and which one's LaFiamma! The real Ghostbusters were perfectly placed in the middle of the zine because they sorta anchored it. Sheila always somehow makes those SG-1 stories seem made for RGB - there's always significant differences, of course, but they're totally natural. And hey, when you love the source episode, too, you can't lose. And Dean's piece was based on a Buffy episode I like a lot, too, but made totally RGB's own, also. I don't think I would have thought of half these things - the insane Ray particularly made me shiver - but it all made perfect sense and worked wonderfully. The AS&J I skimmed, too, but that was a cool idea. And the MAG 7 I hadn't even heard of the source show, had to go look it up, but it sure worked for MAG 7. I just read it as an original MAG 7 fic and never felt anything was bent out of shape to fit the universe. Particularly good points for writing a Vin who can get himself out of a fix but still take some comfort from his friends, and what he said about the six of them as to why they're worthy was so nice.[3]

I really liked this issue. Isn't it funny how Starsky and Hutch is so very rip-able? I liked the Houston Knights and Swift Justice versions of S&H plots. I don't know Swift Justice that well, but since I knew the plot, I read it anyway and enjoyed it. HK is an old friend, so it was very nice to see Joe and Levon again. The S&H based on Alien Nation (now there's a rip I never would have thought of!) was great fun, too. The characterization was great and I liked the angst, too. The two Real Ghostbusters stories were both a lot of fun. I'd be hard-pressed to pick a favorite between the two, but I guess the spooky insane Ray would just inch out the other one. That gave me a chill! I thought the idea of ripping a Roger Davis episode of AS&J and doing it as a Pete Duel episode was inspired! And it really worked, too! Personally, I would have much rather seen the Pete version! The Magnificent Seven story was wonderful fun. And you mean someone else has actually seen Hawkeye? Amazing! The original was really treated well in the recycle. Kudos to the author on this one, my favorite in the issue.[4]

My only complaint about ASCoF #9 was, as always, it was too short. Especially when I only skimmed the MV story and skipped the SOF one. But the AS&J was a hoot -- I love that movie and could so see this playing out! And two RGBs were a treat. What is it about Stargate SG-1 that engenders them, I wonder? I thought they were both really well done. Anyway I enjoyed it a great deal.[5] 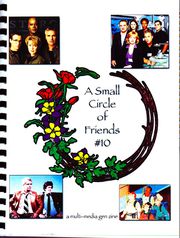 I had to tell you how much I enjoyed ASCoF #10. It's not often I love every fandom in the zine, but this one I read cover-to-cover! I'm writing Sheila and Audrey and Brate individually, too, but I wanted to tell you guys that it was a gem. The stories were episode-quality, especially Audrey's, and everyone worked in its new universe. [6] 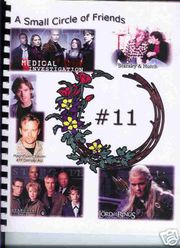 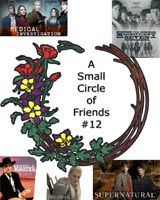 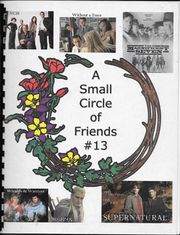