End of the Rainbow

End of the Rainbow is a multifandom anthology.

The even numbered issues are gen and the others are slash. 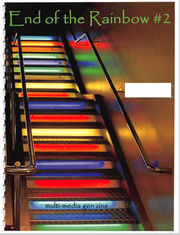 front cover of issue #2 (this example has had a fan's address sticker redacted
From the editorial:

Welcome to our second issue of End of the Rainbow. We really do appreciate all the support you, dear readers and writers, give us in this labor of love. And we do love zinesl

You have a great cross-section of fics here, too! Some sci-fi, and some action adventure, westerns, WWII, and more!

A big "Thank You!" goes out to the writers who made this zine possible: Brate, Cindy Carrier, JJJunky, LaraMee, Susan Macdonald, Kristi Nelson, Sheila Paulson, Nancy Platte, Rubygirl29, and Teri Sarick. They came up with some fun stories. Some are already posted online, others are new.

End of the Rainbow 2.5 is slash. It was published in 2012 and contains 164 pages. All of the fiction is by The Neon Gang and many are previous Fan Q Award winners.

From the publisher: "And we're doing something different for the slash issues. We'll be dedicating each issue to particular author (or group of authors) we enjoy. In this we celebrate Paige Aaron, Kaed, rubygirl29, The Tenth Muse 1, and Zypher. Thank you, ladies!" 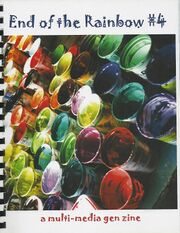