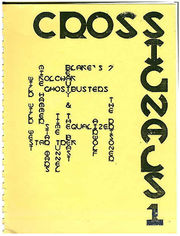 Regarding the play, "Time Trek": "This play has never been preformed. It was submitted to us by Carol Salemi whose brother Michael was a member of this class. As far as the editors of "CrosSignals" can determine, the stage is set-up with the Time Tunnel Complex in the foreground and the view through the tunnel in the background. Scene changes can be accomplished through lighting effects. We have even taken the liberty of creating a character list." 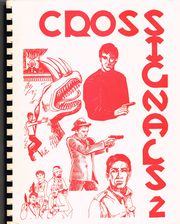 CrosSignals 2 was published in 1990 and is 169 pages long. Stories are by 'Nea Dodson and Sharon Palmer. 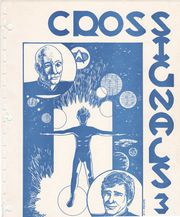 CrosSignals prints crossover fiction, humor, and artwork (no poetry in this issue). This isn't a no-frills zines, but it also isn't loaded to the hilt with unnecessary gee-gaws; the print is clean and legible in a fine two-column layout (which means you get more words for your money), there's no wasted space, yet the zine doesn't appear cluttered, and contains some well-handled layouts, including quarter and column illustrations. If there's any quibble with the presentation, it's that the spiral binding is just a hair too small to fold the zine back on itself while reading (a major advantage to having spiral binding in the first place). Overall, it's a nice package for the money, and the fact that it's 164 pages, most of which are text, makes it a great deal. The writers know how to write and, from the looks of things, the editors are doing a more than competent job of editing (read two stories by a writer published under two different editors, and, if possible, an unedited story by that same writer and you'll get an idea of how good the editor is). None of the stories fall into the 'oh my God, that's brilliant' category, possibly because most of the writing is surface—there's no layer beneath the plot, very little thematic content, or richness of image. But they're good, solid stories, heavy on plot and with accurate characterization; a tip-off that the person knows something about what they're writing and the crossover is worth reading... CrosSignals is not an art-zine—there are no portfolios, no artwork you want to carefully cut from the zine with a razor to mat for your living room wall. The artwork is primarily illustrative. Most of the artists are doing something other than the 'portrait' work (smiling face of a character just past the chin, because shoulders are too difficult to draw) often found posing as illustrations in zines, and l applaud them for that. ... The cover is beautifully printed—a blue offset design on white, and the logo is well placed. Of the three issues, it's definitely the best cover with regard to layout, content, and choice of materials. CrosSignals 3 provides a home for some well-written crossovers and some promising, if not fine, artistic talent. The zine is most enjoyable, with many good, solid stories, a few laughs, and a few tense moments. At the price, it's certainly a bargain. For crossover fans, it's a Godsend. As a precursor of things to come from these writers and artists, it means a brighter future for fandom in years to come. [1] 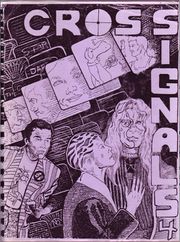 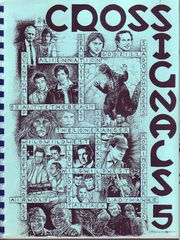 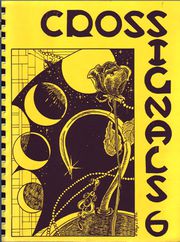 CrossSignals 6 was published in 1992 and contains 162 pages.