Vincent (Beauty and the Beast)

From Fanlore
(Redirected from Vincent Wells)
Jump to: navigation, search

Vincent is a character in both Beauty and the Beast (TV) and Beauty & the Beast (CW). 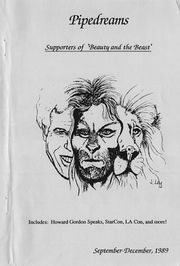 Ron Perlman, Vincent Wells, and a lion, the artist is Judy Ley, from Pipedreams v.2 n.5/6

Beauty and the Beast (TV)

Many fans have chosen to use "Wells" as Vincent's last name. This, however, is fanon.

In June 1988 at Space Trek, Ron Perlman stated in an interview conducted for Beauty and The Beast (Beauty and the Beast fanclub newsletter) that "Vincent doesn't have a last name that I'm aware of. It may come out that he does." [1]

In June 1988 at Space Trek during Perlman's Q&A session on stage, a fan asked him about the last name. She reported that "Vincent's last name? "Gugglioni", according to Mr. Perlman in a penchant for an Italian ancestry..." [2]

The vast amount of fanworks are about Vincent/Catherine.

There is a small amount of Vincent/Diana.

There is a very tiny handful of other pairings, including slash.

There has been a lot of fan discussion about Vincent's genetic make-up: is he more man than beast (and what beast?), an alien? What are the implications of each reality?

See fan comments about Vincent's appeal, his voice, his motivations, and more in the many letterzines.

Vincent’s sex appeal was the talk of the town when the show premiered, and it’s not hard to see why: he’s a furry Fabio, a leonine Lord Byron, a hunky guy with the wardrobe of a medieval prince and the hair of Jon Bon Jovi. He reads poetry for fun. He gives his devotion freely and completely and asks for nothing in return. In an era in which romance had perhaps become mundane, even perfunctory, Vincent was demonstrative, attentive and overt in his affections – a knight in shining armour who scales buildings in the name of love. He is the melding of the mythic and the mortal, the non-toxic ne plus ultra of masculinity. He is basically the physical embodiment of those Ryan Gosling ‘hey girl, I respect you’ memes. In other words, he’s kind of the Ideal Man.

Though he comes in beastly trappings kitted out with medieval notions of chivalry, the real fantasy of Vincent is that he is a man who truly sees Catherine for who she is, listens to her intently, respects her deeply, and always has time for her. The fairy tale of the show is building an emotionally-mature relationship with a person who loves and respects you. But mixed in with that is the impossibility of such a person existing in real life. Vincent’s love is unconditional and indelible and, in many ways, his unerring devotion is unattainable to mere mortals, as Linda Hamilton attests: part of his appeal stems from the fact that he isn’t constrained by the mundanity of modern life’s demands. Vincent is the fabulously-coiffed, anti-capitalist magical stud-muffin you can only find Fridays at 8pm on CBS.[3]

"It centers on Catherine (Kreuk), a tough-minded NYPD Homicide Detective haunted by witnessing her mother’s murder 9 years ago and the killers’ quick demise at the hands of a Beast. After years of searching, Catherine finally finds the Beast, Vincent Koslow, the survivor of a military experiment that went disastrously wrong, and becomes the protector of his secret life as a bestial superhero." [4]

Vincent's last name in the 2017 series is "Vincent Koslow," which is an homage to Ron Koslow, the creator of the 1987 series.