Beast Out is a term used by Beauty and the Beast (TV) fans.

There are two uses.

The first, more common one refers to the beast, Vincent Wells, getting angry and becoming more beast than human.

The show itself referred to Vincent becoming what appeared to be a raging animal as his becoming "Dark Vincent." [1] But fans more often called this "beasting out." 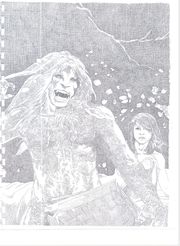 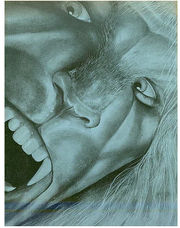 ... or Beast (from Heartsounds #3, artist is Lynne Gutshall) 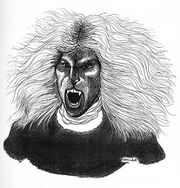 ...or Beast (from What Light Through Yonder Window #1, artist is Lynette Combs)

From discussions I've had with friends and acquaintances at conventions, in letters, and on the phone, I understand that some people think that Vincent suffers a loss of control when he "beasts out." Others have postulated that he's even afraid of losing control if he were to become involved in a physical relationship with Catherine. Without further ado, let's dispel this silly notion right now. Once and for all, Vincent is not Spock; pon far or its equivalent is probably not on the horizon. Nor is he "The Incredible Hulk" (a thousand blessings on the house of Koslow). Most of the time, his discipline and control go "far beyond those of mortal man. " Vincent can and does become angry without turning into a beast ("Nor Iron Bars a Cage," "Promises of Someday"), and whenever he flies into a rage, the provocation is extreme. Vincent becomes a whirlwind of unleashed fury only when people he loves (or other helpless victims) are threatened. Anyone would react violently under those circumstances; it's just that Vincent's anatomical differences enable him to inflict far greater damage than an ordinary man could. Moreover, he's often quite methodical in the disposal of his enemies ("Beast Within", "China Moon").

It's clear that he has the ability to control this darker side of his nature, and can turn it on and off at will.[2]

[February 1989]: A rumor is circulating in Fandom to the effect that Beauty and the Beast plans an episode in which Vincent 'beasts out', going into 'rut' and actually stalking Catherine as a result of it. This rumor is untrue! IT 'WILL NOT HAPPEN. [3]

[June 1990]: As for the in-fighting in fandom, it shows that we are struggling with the two sides of our natures and just like Vincent, we are "beasting out". We are B&B, and lately the Beast has been roaring and slashing. Vincent is ashamed when he "beasts out", we seem to be feeling the same way now, yet he knows it is a part of him and it is a part of us too. We saw Vincent "beast out" so many times this past two and a half seasons, it was our turn to experience "beasting out" first hand. How much more impact and power can a TV show have on an audience. [4]

[July 1990]: To me, Vincent is half man, half beast. That to me is fascinating. I like it when he beasts out, showing the animal in him. And that fact you have him a tail makes him even more animal and so more fascinating. [5]

[August 1989]: They can't improve it, and I think what they're going to do is try to "broaden the audience" by going back to a sort of INCREDIBLE BEAST type of thing, with Vincent "beasting out" three times an episode... [6]

[comments by George R.R. Martin, November 1990]: There were certain elements from the network right at the beginning that regarded us as a hairy version of The Incredible Hulk. If we were going to be primarily an action; adventure show oriented towards children with an obligatory beast-out at the second act's end, and a major rescue to end the fourth act, I really didn't want to be involved. But from talking to Ron Koslow, it became clear that his ambitions for the show were very high and that he regarded it as adult-oriented drama. [7]

[December 1990]: One of the interesting aspects of this discussion is how MUCH do we want Vincent to be a beast? Let me resurrect the hypothetical "ruler" again. Some readers like the idea that Vincent is about as bestial as can be; they like to see him "beast-out." That's one end of the scale. Others have expressed a clear and definite preference that Vincent is truly 100% human -- he just "looks funny." [8]

Y'know, we ALL have dark places within our souls, but can you imagine even TRYING to talk about something like that to the one you love with all your heart? No wonder they didn't ever communicate about this. THAT is the real tragedy.

Although in "Vincent Revisited" Dr. Joy Faulkner maintains that Vincent was never a "schizophrenic personality," his "beasting out" most definitely indicates a separation of a sort. Many of us have had a lot of fun with this "separation" with our various views of the dark side of Vincent's personality. Most of us tend to see this "dark side" as not really evil at all, but merely misunderstood...a hurt child who has been pushed aside, caged and ignored. Never recognized. Not the evil twin, but still, a twin.

Yet in the end, to be truly human, he must acknowledge his own darkness -- recognize it and own it...and control it.

All our versions of the "Dark Beast" are very different. Interestingly and charmingly at odds with one another, but in the essential ways, they are much the same. [9]

In your post addressing violence and sex you wrote of the writers' motivation for using Vincent's rages and brought up the "hairy avenger" theme again, saying, "Koslow would never have allowed that 'beasting out' element to disappear from the story - it was integral to it. But he had an acceptable version of it before TLBL (with Vincent's bonded soulmate Catherine present) and a less acceptable version afterwards, especially when the child's life was never directly endangered. And since Gabriel's intent was to make use of the child this was rarely ever a legitimate concern. Oh, Vincent may not have known that, but all it took was for the viewers to know that to view his violence in different psychological terms. It just wasn't the same as the visceral response developed and explained by the presense of that wonderful and otherworldly bond-tie with his soulmate." [10]

Catherine was a good, loving, giving woman. And a brave one -- foolishly brave most times. That was the way she was written and there were reasons behind it. A)if she hadn't been so foolish, there never would have been any reason for Vincent to rescue her, thus there never would have been any "beasting out" and thus we couldn't have seen Vincent's dark side or had the "action" we had in first and second seasons. B) there are psychological reasons behind what Catherine did, as I've pointed out before. B&B is VERY psychologically correct with its characters. All of them. That's one of the things that always intrigued me about the show. By writing Catherine the way they did, they only made her more real, more believeable, and thus more loveable. [11]

I don't agree when Vincent is compared to sick and disabled persons just for his being Vincent. Being Vincent is not a disease or disablement. Vincent is healthy and definitely able to walk and see and could do all the things people above do. It's the others who are unable to accept him, because he is different. Of course, there is still his occasional "beasting out", but that's a different topic than the one of outward transformation. Gaining self-control is an internal transformation that every human being must perform themselves, and Vincent did manage to gain that self-control in the end. [12]

I've always thought that Vincent could have very well spent more time Above.

The emotional beasting-out risk factor must be considered, I admit. I guess Vincent fears that he might be faced with a situation Above that would "blow his cover" so to speak. [13]

Is it possible that V's awareness of C is increased when in that more 'primal' state (I don't care for the phrase 'beasting out', but you all know what I mean. Please someone, come up with something else I can use!). I like this idea though. [14]

...keep in mind, Vincent has a dual nature. We've been talking about his "regular guy" characteristics (compassionate, intelligent, etc.). Those things translate fairly easily into an Above persona. But we cannot forget that he is also different in ways we cannot entirely define, and not just externally (facial differences, claws, etc.), but internally (the "beast out" mode, for want of a better term). When we talk about remaining true to his character, we need to remember his character does not consist solely of the "human" parts of him. [15]

I have always felt that Father didn't have quite as much faith in Vincent's control as Catherine did. In part it's because he saw his son, as a teenager, in such great distress - something Catherine didn't see. But what he, IMO, never fully comprehended was that Catherine has seen Vincent in beast-out mode, I think, many more times than Father...and has been able to calm him or bring him back from that feral place where his "Beast" is buried. [16]

In all of season 2 (and all the way back from Dark Spirit), only Once Vincent had to beast out in something related to Catherine's job, (The Hollow Men), and even then, that was Vincent's fault for threatening those boys. [17]

I do wonder, even knowing that logically, if Vincent still feels like he failed his principles having to "beast out". The Outsiders where a small few, but look at the damage they did. [18]

[Catherine Chandler] saw him beast out and kill in the Pilot, so if she hadn't run screaming that early on, he should have gotten the hint she was a "keeper"! I'm kind of joking and kind of not... [19]

My point is: my beasts don't seem to "beast out" without a purpose. I've talked to zoo keepers who look after big cats and asked them if their charges go off on big angst-laden rampages. The answer was full of laughter: what? A lion exert himself when he doesn't need to? Depressed animals involute: they stop eating and withdraw. They might lash out if really stimulated, I suppose. [20]

The notion that Paracelsus might have played with Vincent's mind long before the coup de grace of pushing him to the brink with his Father impersonation is thought-provoking! Making things infinitely worse for a Vincent already struggling with his beast-out mode/dark side/anger management issues/what-have-you would be introducing even more insecurity... [21]

Also, thanks to my friends who attended my BEAST-OUT here in Texas. I've been purged of my sorrow and pulled screaming and kicking out of this funk I've been in since the first three shows. [22]

This past weekend, some of us TX B&B fans got together for a second BEASTOUT at the home of [Linda M] in TX. [Lucy G], Linda and myself were among the attendees. Nonnie S. and [Wanda C] were otherwise engaged. We had a Trivia Contest, Match the Characters to the Actors Quiz, zine-reading marathon, BBQ, and to top it off, watched the 2-hr movie and "Walk Slowly" again. We plan to get together to celebrate Vincent's birthday in January, and hold our 3rd BEASTOUT sometime in February. Anyone who wishes to join us is more than welcome.... This is our way of helping to keep the dream alive in TX. [23]