You may be looking for Tunnel Vision, a Beauty and the Beast novel by Wendy de-Veryard.

Tunnel Visions is a het Beauty and the Beast anthology written by Sharon Reynolds. 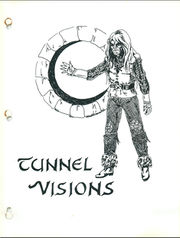 Tunnel Visions 1 was published in mid-1988 and contains 96 pages.

Paracelsus has hired two trained assassins to kill Vincent and Father has shown them the way down. Includes poetry by author. [1]

This zine came out in mid 1988 and has three short stories and a section of poetry. The stories all revolve around Vincent and Catherine and a good deal of hurt/comfort and the Tunnel world being placed in jeopardy.[2]

From the title page: "Welcome to the fantasy world of life in the tunnels beneath New York City. To all fans of the television series Beauty & The Beast, this will be a place of fond longing, of escape to a warm, loving, wonderful place, where love reigns supreme and anything is possible. For those who have not yet ventured into this hidden haven, welcome. Come join with us, in tunnels beneath the city, in the love, and imagination. Come live the fantasy."

Tunnel Visions 2 was published in June 1989 and contains 200 pages of fan fiction by Sharon Reynolds. It is subtitled, "Mirror Image."

There may be variation in some of the issues. One eBay seller described the zine: "The cover is a blue college style binding and there are 2 pages that might be the actual cover, not bound or hole punches, some wrinkling on them because they are separate." 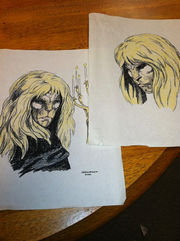 loose artwork on parchment paper in one version of the zine. Art by Sharon Reynolds
.

At least one fan created a special binding for this zine. It is unknown if this was a one-time creation, or if all issue #2s were bound this way.

In the lead story, Vincent meets a brunette version of himself, Alexander. Other stories involve Bennu, a powerful alien; Catherine having amnesia; and a young-Vincent-sees-the-moon story. Additionally, there are some poems, a graphic (illustrated) short story, and a gallery of miscellaneous art at the end. [3]

In this zine we discover that Vincent has a darker brother, Alexander. He has just escaped from the lab in which he was raised, and we spend the rest of the zine with him as he adjusts to Tunnel life, having a brother, and finding out more about the scientists who created him and Vincent. This naturally places them in several hazardous situations. There is also one crossover story with 'The Phoenix.' In the early editions, at least, the writer lavished great detail on the zine, hand-coloring most of the illustrations and binding the entire zine to make it look as if it were a private diary.[4]

Tunnel Visions 3 was published in March 1990 and contains 112 pages. It is subtitled, "Black Lace and Roses." The cover is hand-colored and by Sharon Reynolds. 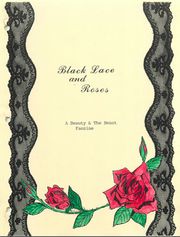 Alexander, Vincent's 'twin,' works with Joe Maxwell to rescue Vincent and Catherine from an evil woman. Other stories involve a trip to Connecticut; and Victor, a sinister baron. There is also fiction and poetry by Robbie Sturm. [5]

More adventures of Vincent and his darker brother, Alexander, continued from Volume 2, Mirror Images. The writer tells us more about their mysterious origins, and Joe and Alexander join forces to find Vincent and Catherine when they disappear. Also, Catherine and Vincent take an unusual trip to her cabin in Connecticut. [6]

Welcome again, to the tunnels beneath New York City. Come in and share a little of our world with us. Go safely to your homes. Keep the wonderful dream alive! Come live the fantasy.

Tunnel Visions 4 was published in May 1990 and contains 91 pages. It is subtited, "Idyll of a King." 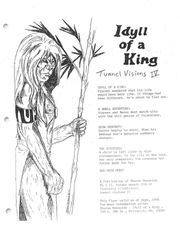 In the title story, Vincent is captured by African cultists who revere him as a god. In other stories, V/C waltz to an old phonograph; pre-tunnel Jamie shoots Vincent in the park; Paracelsus threatens; and 'Bennu,' the alien, returns. Also poetry by Ursula Behr, Robbie Sturm. [7]

Tunnel Visions 5 was published in 1992 and is subtitled, "Black Out."