Diana Bennett is a Beauty and the Beast character who appears in the third season of the show after Catherine Chandler's death. 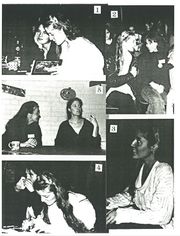 Jo Anderson, the actress who portrayed Diana, at an October 1992 convention in Germany

She is a character of intense fannish opinion. See Beauty and the Beast: The Classic vs. Season 3 Fandom Split.

When she is portrayed in fanworks at all, she is either a focus of discord, or is referred to what fans came to call Diana Appears as a Friend, the latter to let fans know that Vincent Wells, the beast, has no romantic or sexual interest in her.

There are roughly 600 titles of (the numbers of volumes is many, many more) of Beauty and the Beast zines. Diana as a romantic or sexual partner appears in just a handful.

It appears that the same one or two photo references inspired most Diana Bennett art.

If Diana is to be the new "love interest", she needs a shot of adrenaline to spruce her up. As is her look is so bland and unemotional. Her voice is a boring monotone. She needs a wardrobe that doesn't look like it came from the trash can behind that ramshackle loft where she lives. Once she has been made presentable and worthy of Vincent, the relationship must be developed slowly and very gently. [1]

I really like Diana and I wish people would stop making comparisons. She's an individual and should be treated as such. She vent to Catherine's apartment to do her job. I liked her down-to-earth qualities, like the baseball cap she wore while waiting in the cemetery, her not-to-perfectly-clean loft and her jeans with the holes in the knees. I found her very easy to relate to. (May 1990) [2]