Pipeline (Beauty and the Beast letterzine edited by Stephanie Wiltse)

Pipeline is a Beauty and the Beast newsletter with at least 26 issues and a run of four years.

The editor stated that it was a "for-profit" enterprise.

It won the 'Best Newsletter' Award at Tunnelcon #1.

Stephanie Wiltse, editor of the "Pipeline" fan publication about the 2-year-old show, says half of her 800 or so subscribers "joined after the show was canceled because they were upset. What we're finding out is that the Beasties are coming out of their closets, as it were, and they're standing up and being counted like those students at the end of 'Dead Poets Society.' [1]

In 1993, there were plans to publish "The Best of Pipeline." This would be "with Stephanie's most memorable interviews and articles, photos, artwork, and all that made Pipeline so special. The Helpers Network Gazette members would get a substantial discount on the price at which this book would be offered to non-members." [2] It is unclear if the compilation was ever published.

At least one fan has referenced Pipeline as a major pipeline, as it were, during the The Beauty and the Beast Wars.

"As for "Pipeline", it was my perception that this was a conduit for fuel [of arugments], each time it arrived in my mailbox, I felt like I'd been torched and left to burn."[3]

This newsletter was also the birthplace of the term Nay-sayer.

Ron Koslow, one of the showrunners, granted the editor of "Pipeline" "access" to information and communication in this postcard, Archived version.

Roy Dotrice, one of the stars of the 1987 television series, “Beauty and the Beast,” replied to a fan letter. Within months a correspondence grew into the infozine “Pipeline.”

At first, none of the fans knew there was anyone else ‘out there’ interested in their favorite show. Even though an “International Club” was also organizing in that Spring of 1988, as was the fandom’s first letterzine aptly entitled “Once Upon A Time.” Exec and creator, Ron Koslow, did not want to officially sanction any one of us, but he did grant exceptional access.

Thus started a 5-year adventure writing for a little fanzine that gained an international readership in the thousands and landed its amateur journalist/editor a byline in “Starlog” magazine, and favorable review in American, British, and Canadian “TV Guides,” mentions in “USA Today,” a job offer from a Hollywood ad agency, reference in a college textbook (“Textual Poachers” by Henry Jenkins), and even an interview on TV’s “Entertainment Tonight.” [4] 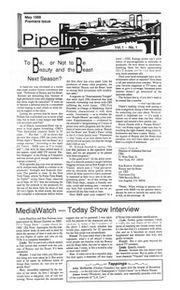 Are we all the same, only in different ways? You're reading this, so we have one interest in common -- the television series "Beauty and the Beast." Yet we differ, bringing to each episode our own unique experience, and so coming away with impressions uniquely our own. Likewise, there's more than on imagination at work, contributing to the "B&B" we see every week. These people weave the illusion that suspends our disbelief. All touch us, each in his/her own way.

We fans? followers? votaries? supporters? zealots? students? enthusiasts? (well, whatever your favourite moniker) of Beauty and the Beast have much to enjoy in what we share and how we differ. That's something to be celebrated and looked into, and that's what this newsletter is all about. Pipeline is for people who agree that it is not an idle pursuit to ponder "such stuff as dreams are made on." 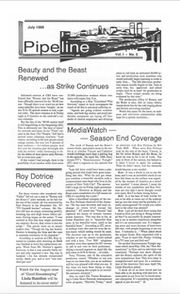 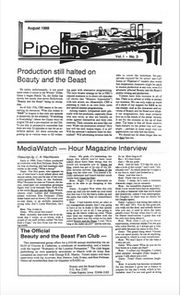 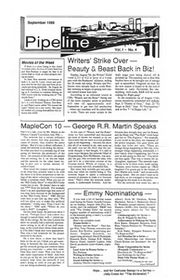 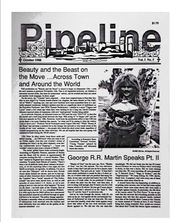 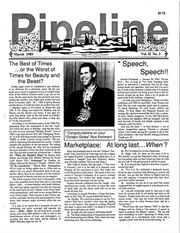 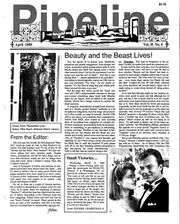 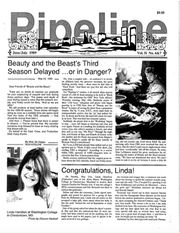