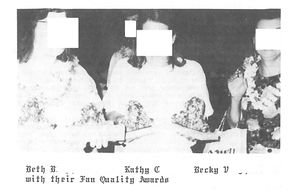 Any Beauty and the Beast with a copy of the voting form could vote. Awards were given at various annual conventions, beginning at TunnelCon I in July 1990.

From a flyer sent to zine editors:

Enclosed are documents pertaining to the Fan Quality Awards. We would like as many people as possible to know about and become involved with these awards. In plain speaking: We truly want them to be FAN awards. Voted on by all of B&tB fandom and not just an active few.

The awards are being sponsored by the International Fanclub. Please note the word SPONSORED. The club does not have control over voting or the counting of the ballots. The international club is just getting the ball rolling with respect to getting a yearly awards procedure in place. Their only responsibility is to have the awards ready to present at TUNNEL CON I this year. Next year another group may take over the responsibility - this too, will be determined at Tunnelcon I.

Please give us your support in this. Thank You

From the first year:

1. You do not have to be a registered member of Tunnel Con I or the B&B International Fanclub in order to vote.

2. You may vote only once for each category.

4. All ballots must be signed in order to be valid.

5. Winners will be by simple majority. In the case of a tie, an immediate secret ballot will be taken of those members attending Tunnel Con , with the majority of votes determining the winner.

6. Results will be tallied by two persons to be selected by the Tunnel Con I Con Committee and will not include anyone already held in nomination in any category.

7. Results will be announced and awards presented at Tunnel Con I at a time to be specified.

The awards were handed out at Tunnelcon I in 1990. A convention report, listing a few of the award winners can be found here.

Novel: Kim Prosser for "A Child is Born" and A.V. Wilde for The Promise
Short story: Kathy Cox for "Echo" and Kathy Cox for "Visions of the Heart," both in Destiny #2
Filksong: S.D. Nym for "Jungle Vincent" in B & B Lite, there were no other nominations
Crossover story: Sheryl Tribble for "Shadows of Light," there were no other nominations
Letterzine: Pat Almadine for Promises of Yesterday [sic] and Jeanne Cloud for Once Upon a Time... Is Now
Overall fanzine: Lori Bartlett for Above and Below #1, Kathy Cox for Destiny #2, and Kay Simon for Heartsounds
Novella: Kathy Cox for "Love & Light: The Fable" in Destiny #2 and Cynthia Hatch for The Bridge in Kaleidoscope
Vignette: Karen Bates for "Shadow" in Faery Tale #3 and Kay Simon for "Vina's Story" in Heartsounds
Poetry: Cynthia Hatch for "Words" in Kaleidoscope and Jackie Paciello for "To Catherine" in Rerun #6
Artwork: Beth Blighton for the cover of Destiny #2, Dragon for page 175 in Light and Cloudshadows #3, and Pat Horowitz for the cover of Tunnels #1
Newsletter: Vicki Burke for Whispering Gallery, Deb Hense for Beauty and the Beast International Fan Club Newsletter, and Stephanie Wiltse for Pipeline
Overall artist: Beth Blighton and Lynne Gutshall

The awards were scheduled to be handed out at Tunnelcon II in 1992. A nominee list was printed in the back of The Beauty & the Beast Buyer's Guide to Fanzines‎.

From Stephanie A. Wiltse:

Liz Helm of the 'International' sent along a lengthy comment that could not be reprinted [in Pipeline] except in its entirety per her request. At 2 full pages that was not possible. At any rate, Ms. Helm did have her say in issue #39 of the letterzine "Once Upon a Time Is Now." In her letter to Pipeline, Liz of course suspected this editor's facts and motivations. But I'm afraid her admission that only an approximate few hundred fans actually cast nominating ballots [for Beauty and the Beast Fan Quality Awards] in the first place (less than half those that attended Tunnelcon itself) speaks for itself about the credibility of these 'awards.' The nominees' excellence, however, needs no defense. I continue to dispute Liz' comments published in "Out, In." I'd like to go on record as the person who suggested Cynthia Hatch to Ed Gross when he had first started looking for fan writers for his B&B series. I consider Jeanne Cloud and Beth Blighton friends of mine; I voted without hesitation for Sue Krinard's work during a stint as art contest judge last year. 'Nuff Said.

I hope the awards tiff doesn't escalate. I had voted for "Pipeline" on the 1st nomination ballot but per your request, did not do so on the final awards ballot.

What a cowardly act! You should be ashamed at such an attempt to minimize & even vilify the hard work of so many people.

Your courage in once again speaking your mind gave me the courage I was looking for to speak mine. It made me feel a lot better about myself that I al least put my feelings down on paper and sent them off to those responsible instead of just bitching to my friends.[1]

A few months ago this editor received a copy of a letter that basically called the recipient a well-known fan writer- a coward, malicious, criminal, and in need of professional mental help because of that writer's "vicious attack on fans she didn't agree with." Since that writer had left fandom nearly a year ago, it was obvious the fan was acting on an erroneous rumour. The writer's reaction to this injustice is just as harsh, but I think understandable: "You pay until the end of time for anything you write or even what you don't write! I will regret to the end of time, anything I ever contributed to feed this disease called Beauty and the Beast Fandom." (Editor's Note: This, unfortunately, is not just an isolated incident, and I can't say that I don't sometimes share this revulsion. But I think it must be remembered that many came to B&B not out of love but out of need. They took a particular refuge in the series which, unless you've come from an abusive childhood or some other debilitating emotional injury, can never be fully understood. After herculean efforts to save it, that refuge changed abruptly and without satisfactory explanation ... that refuge became threatening. The fan community supporting that refuge was awash with controversy and it too became threatening. These people felt, and in some cases still feel, that threat keenly enough to lash out at others over it. Horrified, I once told them in an editorial to "turn the TV set off" if they didn't like what was already a fait accompli. I have realized since then that they cannot. for those that do have that choice available to them I urge understanding and tolerance.) [2]

As reported in June/July 1994 issue of The Helpers Network Gazette and handed out at Tunnelcon III.

A special award was granted to Lyn Musaccio, of the New England B&B Hotline, and to Nan Dibble for The Helpers Network Gazette. The framed certificate reads, "Certificate of Appreciation for Keeping the Dream Alive awarded to Nan Dibble of the Helpers' Network Hotline In thanks for extraordinary service to the Beauty and the Beast Fandom. In the presence of fans, friends, and stars of Beauty and the Beast, you are commended for faithfully providing weekly information updates since 1991. May your good work continue for many years to come. Presented at TunnelCon III, Las Vegas, Nevada July 9, 1994."

The nominees and winners as printed in The Helper's Network Gazette. They were given out in 1995 at A Distant Shore (Beauty and the Beast convention).

Helpers' Network congratulates the nominees and winners of this year's Fan Q awards. This year, any zine was eligible, no matter when it was written or published, so long as it had never won an award before. So don't be surprised that some of these are older zines. Winners are indicated by the numbers preceding the listing.[3]

1 "Down in the Dark" by Roxanne Shearer Koogler
2 "Someone to Watch Over Me" by Adele Turner
3 "Your Pain Is My Pain" by Teresa Teppe
"Soulmates, Part IV" by Barbara Hill and Teri Milliman
"Checkmate" by Teresa Teppe

1 One Day, a Rapture by Pamela Garrett
2 Beyond Beginnings by Linda Barth
3 When the Phoenix Sings by Sue Glasgow
Beginnings by Pauline Marshall
Circles by Adele Turner
Detours by M. Sue Waugh and Teri Milliman
Parallel Worlds Within the City by Peggy Garvin

1 Rosemarie Hauer for Sensual Candlelight (also nominated for White Cover)
2 Teri Milliman for Soulmates, a Never-Ending Dream 4 (also nominated for Demons at the Gate)
3 Jan Durr for Huntress 2
Lawrence Walker for Beyond Dreams
Inez Brown for Beyond Beginnings I and II, A Heart to Hold, and Passion
Mary Ellen Nicosia for O Sweetest Song (the one ed. by Carolyn Kleinsorge)
Michelle Scott for Parallel Worlds Within the City
Lynette Combs for Promises Fulfilled
Anna Deavers Kelley for TunnelCon III
Pam Tuck for Vincent's World 10
Lynette Combs for What Light Through Yonder Window

These awards were given out at A Kingdom by the Sea convention.

Favorite Work In Other Media: