Kaleidoscope (Beauty and the Beast zine) 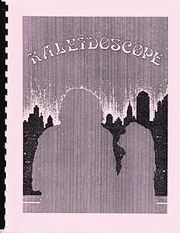 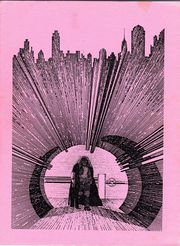 Kaleidoscope is a three-volume series of Beauty and the Beast stories and poems written by Cynthia Hatch.

They are online here, without art: Kaleidoscope.

This zine is most-known for the story The Bridge.

Summary: Classic stories, including "The Bridge," a story that presents Vincent and the Tunnels below as a hallucination that Catherine creates in order to cope with the trauma of her assault.

The zine has a warning regarding "The Bridge":

I am told by those who previewed this book that the second story requires a note of caution -- something akin to the Surgeon General's warning about possible health hazards. It may be best to think of it as a commercial break for reality -- the kind of reality that allows network executives, who worship only cold hard numbers, to hold the power of life and death over something too fragile and perfect for them to understand. If it strikes you as pure fantasy, while the other two stories seem real, that's fine. Over the past two years, we've all learned how beautifully and mysteriously the two can blend. Rest assured that, having completed the treacherous crossing of "The Bridge" in safety, you will find yourself in unknown territory, but back in the realm of B&B, as we very are close, in fact to the place from which we started. Safe journey. C.H.

The reaction to "The Bridge" was primarily negative. The sentiment against the story was so strong that a fan wrote a responsefic (with Cynthia's permission) which was published under the title Once You are Real.

In a 2005 interview held as part of the Winterfest celebrations Cynthia talks about the response to her story. See Winterfest Interview with Cynthia Hatch.

See reactions and reviews for The Bridge.

[zine]: I would like to comment on a fanzine I recently read and, hopefully, prepare those who have not encountered it yet for a singular experience. To describe my feelings will be difficult without disclosing the plot To do so would be unforgivable, destroying the pleasure to be uncovered by the uninitiated. There are many familiar adjectives I could use in its praise—remarkable, extraordinary, unforgettable—all accurate and true, but the feelings engendered by this book cannot be easily set down in words. I don't believe there are words. The story casts a spell intense and powerful, creating an intangible aura which remains forever in the heart. Oh, yes, the name of the book—it's Kaleidoscope, by Cynthia Hatch. A few weeks ago I was talking to a friend when I mentioned that I had not read it yet She looked at me, astonished, then replied, "I envy anyone reading that book for the first time." I thought of her remark after I finished Kaleidoscope and agreed... completely. Read... savor ... and marvel. [1]

[zine]: A most extraordinary zine. This collection of stories by Cynthia Hatch has earned and will ALWAYS have my highest rating. Her mesmerizing writing style, her profound insights and her feel for the characters and spirit of the story are nothing short of perfect. Our DREAM is safe in her hands, alive and well and growing — K2 is due out soon. [2] 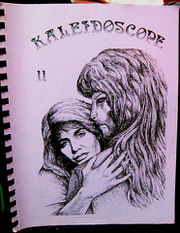 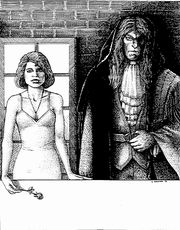 Kaleidoscope 2 was published in July 1990 and has 256 pages. Art by Sue K. This zine won an award at the South of Oz convention.

A summary: This novel continues the story of Vincent & Catherine failing to get together. A subplot deals with an art theft that turns into a hostage situation. Mitch appears.

This novel continues the story of Vincent & Catherine failing to get together, although the impediment is a little hard to discern. Nevertheless, excellent characterizations and good reading throughout. A subplot deals with an art theft that turns into a hostage situation.[3]

When I read "Kaleidoscope I" thought I had read the elite, the cream of the crop. If words could hold social rank, then I believe this 'zine would be heir apparent to a dream that none of us would have guessed could influence us — inspire us—so powerfully. When I received"Kaleidoscope 2," needless to say that all my other work became secondary.

If you buy zines for a large amount of art, you may be disappointed; however. If you'd rather have a few pieces of high quality, I think you're going to be very impressed. This 257 page tome has only six pieces of art, two of which grace the front and back cover, created by the author and her colleague, Sue Krinard. If your passion is for the written word, then this is your greatest treasure for there are "great gobs of it."

"Kaleidoscope 2" is a continuation of the original Kaleidoscope's stories entitled, "The Circle" and "Guards," in which Vincent and Catherine, having acknowledged the desire they feel for each other, must confront the realization of their dream and how they will deal with these mind-altering longings. Vincent insists that they still go "with courage and with care," and maintains that there are choices Catherine must make, choices about decisions she has yet to truly recognize. We find our already perfect couple trying to become even more perfect — even more deserving and worthy of the other's love.

The author delves deeply into both sides of their psyches. Unlike some writers, Cynthia Hatch doesn't have one character make a profound statement that leaves the other struck dumb with the realization of a truth discovered.

If Catherine takes one good verbal punch at Vincent's armored resolve, then Vincent comes right back with his own deeply inspected reasons for that belief, plus a few shocking confessions! The returning blow brings them back to square one in their relationship, but on a higher level, with greater understanding of each other.

I think its greatest appeal is that, like Vincent, no word or sentence is frivolous — everything has meaning. I found myself re-reading a page several times to find the subtle messages that were not being openly addressed, but were there all the same. The premise of this story will sweep you away and every turn of the page rediscovers the multi-faceted dimensions of the Beauty and the Beast theme as well as the depth of the characters. The sub-plots — an art theft and kidnapping, and a rain-burdened tunnel community — adds an enjoyable flavor which allows us to see Catherine and Vincent at work In their own environments. I found It very easy to become lost in the images that this tale created.

At times, the desperation and sexual tension is as draining to the reader as it is to the characters, but it is sprinkled throughout with a levity that does not impose on the seriousness of the tale. At one point Father exclaims, "Good Gracious, the tea's gone!" with a tone that spoke more of a complete cave-in! He also regales Catherine with a peek into Vincent's childhood and depicts the impossibly cute image of a seven year old Vincent chanting "Pig In a poke" as he swings his feet against the rungs of his chair.

I don't want you to think that this zine Is just scene after scene of unfulfilled desires. I enjoyed the way answers to questions I hadn't consciously acknowledged were addressed. After I read a scene, I found myself saying, Wow, I hadn't even thought of that, but it would be a great panel discussion! I found that the author's interpretations of these dilemmas were completely believable, although at times I felt as if I were eves-dropping on a some intensely personal conversation. I hate the Idea of waiting for a Kaleidoscope 3 (dear author, hint, hint). I just didn't want it to end. The only time that I've ever experienced a similar feeling of disappointment was upon seeing the credits roll at the end of "A Happy Life" and knowing that we were going to have to wait all summer for the next new episode.

I doubt that this author could ever write anything that would be less than superb. Although it Is not 'Kaleidoscope,' (but then again, what is?) It is Indeed one of the great masterpieces of this fandom's world of fiction. If nothing else, we can at least thank the author for drawing the analogy of the kaleidoscope — that wonderful instrument that twists a beautiful combination of colors and shapes Into a variety of patterns — to what Beauty and the Beast has done to us. [4]

I hate it too, when fan writers move Catherine Below and give up her life Above--when they don't do it with the depth and completeness the transition de serves. There are so many titanic and volcan ic issues involved—after all, we're over turning the very premise of the show, and taking away the automatic source of "action and adventure." But in my personal view, there's just no way of realistically combin ing her work Above with a life Below, not without seriously endangering the underground community (Father has infected my thinking, I guess). How could she leave and return regularly, 5 days a week, without arousing suspicion? How could she hide this new commitment from her co-workers? How could she continue to endanger herself by her investi gative work Above, thus worrying and endan gering Vincent? Couldn't she put her drive and talents to good use in the society Below? And isn't Vincent worth any sacrifice? Or would life with him be fairly average, needing the stimulation of a full-time job to keep from getting boring?

Well, thank goodness "Cynthia Hatch" has already addressed the questions [of how to combine in her newest, Kaleidoscope II, 250-plus pages worth of mesmerizing, thought-provoking drama. She leaves no stone unturned in this definitive work, and shows us exactly WHY Catherine feels so compelled to continue her life and work Above and WHO is the restraining force. Already I'm dying to see what the future holds in K-III. [5] 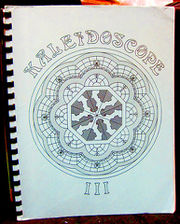 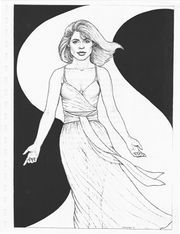 A summary: The author premises this novel on the assumption that K-2 was all a dream. Deals with Vincent's Dark Side and Catherine's complicity in evoking it by her dangerous lifestyle.

Third and final volume of the series. In a surprise plot twist, the author makes a telling commentary on the 3rd season. Catherine and Vincent spend a magical night Above on Saowen which leads to the long-awaited consummation of their love. This series is a classic. Highly recommended.[6]

Hatch premises this novel on the assumption that K-2 was all a dream! Grittier account than K-2, with more recognition of Vincent's “Dark Side” and Catherine's complicity in evoking it by her dangerous lifestyle. Long, long, gorgeous “first-time” middle section. There's an attempt to generate suspense through a small subplot about a possibly deranged friend of Steven Bass following Catherine around, hoping to spot the “monster” Steven told him about; but that pretty much comes to nothing when the threat is fortuitously removed. Vincent and Catherine waltzing outside a Halloween party, then wandering the streets, is quite charming. There's a lot more philosophizing by all participants than there is action but the process of Vincent's finally coming to accept Catherine's decision to move Below is well handled. Would have benefited by tightening/trimming some of the long, long conversations but definitely good reading. A lot of zine for the money.[7]