B & B Lite is a gen and het Beauty and the Beast 35-page anthology with a humorous content by Sue D. Nim. It has a cover by Nancy A. Stasulis. 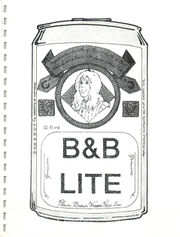 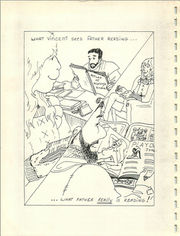 "If you must know, Lucinda C. Brown edited this thing, and Nancy A. Stasulis had her arm twisted by the aforementioned LCB and coughed up all of the art. All typing and and computer graphics were also produced by LCB."

Just after Thanksgiving of 1988, I received an envelope in the mail with no return address, just a strangely blurred postmark. Although it had OMINOUS stamped all over it, I opened it anyway to find a slender bundle of stories written by someone under the unusual pseudonym of Sue D. Nim, who in her letter offered me the chance of first dibs on these little "gems".

Sue's letter informed me that an unnamed editor had turned down her efforts because "this is a serious B&B zine into which a lot of effort goes, and your stories are not serious, not long, romantic and meaningful, and I'd get murdered by the LOC's if I included a story that made fun of the show."

Well, I've always considered that the writing of stories of a humorous nature is serious business. And if they can't take a joke...

So here I am, doing what I said I'd never do again as long as I lived, and publishing a zine. Yes, I know who Sue is. No, I'm not telling. She says she prefers her life to be unexciting. I'll be glad to get your LOC's to her, though. No letterbombs, please.

From the author's introduction:

"Although this little type-tapper worships Vincent's butter-soft hair and crystalline sapphire eyes as much as the next hyper-hormoned drooler, she also can give herself enough space to appreciate that the Adored One (and his premise, show, and fanfic writers) have a few tesnsy faults — and a few openings for humor. It is in this spirit of comic jest that she tic-tic's her little satires and hopes that the B&B vestels will leave such items as tar and feathers at home in their Hope Chests, next to the velvet handcuffs and lion masks, where they belong.

This cheerful miscellany includes such items as a vignette about the soggy aftermath of rained out concert in “Chamber Music”; a gallery of pictures of Vincent drawn a la the great masters (the reviewer was particularly fond of “Mona Vincent”); other fiction, cartoons, assorted "Scenes We'd Like to See on B&B” and a good general grin. Won 1990 TunnelCon I award for comedy in B&B. [1]