Light and Cloudshadows is a gen and het Beauty and the Beast anthology. 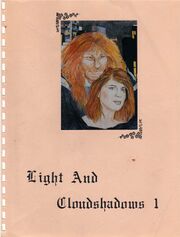 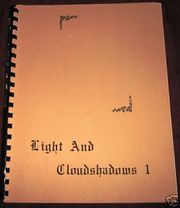 cover of issue #1 showing that the art on the front is affixed in such a way that it often falls off.

Light and Cloudshadows 1 was published in December 1988, and contains 11 stories and poems. It was edited by Kim Prosser & Lisa Swope. Art is by Rose Marie Badgett, Julie Edwards, Lisa Stubbblefield, Stephen King.

It is an anthology of short stories including a toddler Vincent story, two original characters from the Doctor Who universe take young Vincent and Father on an adventure, and Professor Hughes (from "Nor Iron Bars a Cage") doesn't die and comes Below to live.

There is a hunger in some fans to explore every aspect of Catherine and Vincent's relationship, to play in the tunnels with Jamie and Mouse, to look over Father's shoulder in the library, to trot alongside Vincent as he moves, day by day, through his life Above and Below........ from the first episode, this show reached out and grabbed us, embracing us almost as tightly as Catherine did Vincent at the end of "A Happy Life". One thing the writer's strike and consequent famine of new shows did was force fans of Beauty and the Beast to write. I don't know what we'd do if Witt/Thomas or Ron Koslow suddenly told us to stop...do it on the sly, I suppose... The stories... so many came from a single idea, dropped into a conversation. What if Ellie had a crush on Vincent? What if Hughes didn't die a the end of "Nor Iron Bars a Cage?" What was it like for Father the first time Vincent went into Beast mode? Simple questions... to write reams about... 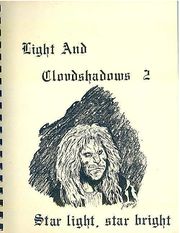 Light and Cloudshadows 2 was published in December 1988 and contains nine stories and poems. The first edition is 199 pages and the second one is 99 pages. Subtitle on the cover: "Star light, star bright." Art is by Lisa Stubblefield, Rose Marie Badgett.

.....The zine grew out of my own frustrated desire for more stories on "Beauty and the Beast". In short, I got tired of writing for myself. I wanted new stuff. More than anything this publication is a labor of love , and not a bondkiss in sight (though there may be other kinds of kisses...) The first edition of Light and Cloudshadows II contained 199 pages, this second edition contains 99 pages. All original copy from the first edition is contained here. The print has been reduced to offset rising production costs.

Light and Cloudshadows 3 was published in May 1989 and contains 189 pages. the art is by Gipson, Dragon, Vicki Kime-Macky, Rose Marie Badgett. 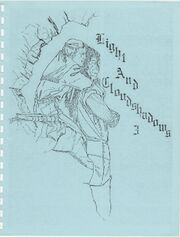 This zine contains 5 stories including a 'young Vincent'; one that features Mouse; and a variation on a theme based on the episode, 'Arabesque.' In 'Love & Marriage,' Vincent finally proposes to Catherine and they come to a decision regarding children. [1]

They really hit their stride with this one. “Up Above the World So High” by Swope is the best “Vincent sees the moon” story yet written. Prosser's very moving (no pun intended) “Dancing on a Grave” recounts V's patient rehabilitation of a Lisa-like danger who retreats to the tunnels in a physical collapse brought on by her father's regimen of domination and drugs. In Prosser/Swope's “Love and Marriage,” (a sequel appears in L&C-5), C nearly destroys her relationship with V by trying, at Peter's prompting, to make fewer demands on V's time and energies. When the resulting painful misunderstanding (he thinks she doesn't love him anymore) has been sorted out, the balance of the story recounts V/C's reconciliation, marriage, and difficult decision to become parents...and what comes of that. [2]

Light and Cloudshadows 4 was published in September 1989 and contains 184 pages. Art is by Dragon, Barbara Gipson, Karen Jean Kish, and Rose Marie Badgett. 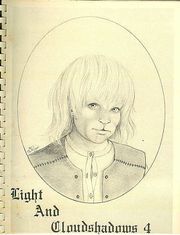 copy of the front cover of issue #4 inside page from issue #4

This fourth volume of the series contains 5 well-written stories. In "The Pond," Vincent faces his life-long fear of the water and strange and eerie events take place in 'Solstice.' 'Do Not A Prison Make' gives us an alternative ending to the episode 'Nor Iron Bars A Cage,' as Catherine rescues Vincent after he's been to a lab by Gould. Vincent and Catherine create their own place to be alone in 'Treasures,' and in 'Brothers Now And Then,' Devin and Vincent play cruel practical jokes on each other. This story ends with Father telling Devin of the heartbreaking events suffered by a young Vincent after Devin left. Also included is a collection of letters Catherine and Vincent write to each other. [3]

So much wonderful fiction here it's hard to know where to begin. Especially notable are Prosser's “Do Not a Prison Make,” taking off from the final minutes of “Nor Iron Bars a Cage”: Gould, surviving, transports C and caged, chained V to Gould's prospective buyer for “the creature,” a research facility in Maine. Even after V/C escape, all is not well. A most suspenseful, powerful story. Prosser's “Treasures,” quiet and moving, shows how V/C agree to create privacy from the continual interruptions from the tunnel community by constructing and furnishing their own “clubhouse.” Several reviewers named Swope's novelette, “Brothers, Now & Then” as of particular and unique excellence: a marvelous frame story, the present dealing with an escalating series of practical jokes that get serious, between V and Devin; the past story deals with the aftermath of Devin's disappearance, when V was a child. One of the finest stories in this fandom. Other fiction by Michael Beacom, Carolyn Lynn; art by Dragon, Gipson, Rose Marie Badgett; poetry by Barbara Corrigan. Also correspondence between V/C done by Prosser and Ursula Boyle. [4] 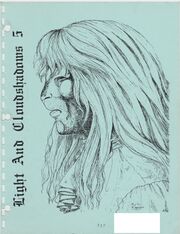 copy of cover of issue #5

Light and Cloudshadows 5 was published in December 1990 and contains 124 pages. Art is by Gipson, Dragon, Judy Ley, and Rose Marie Badgett.

Standout story here is Prosser/Swope's “The Thorn of the Rose.” A novelette taking off from the Trilogy, it describes V's nervous breakdown brought on by the unrelenting demands and expectations of the tunnel community, and C's rescuing him away to the healing solitudes of CT. Certainly among the best V/C go to CT stories there are. “Child of Light” (Prosser), a sequel to L&C-3's “Love and Marriage,” is a Continued Classic account of V/C's reaction to the birth of their son, Nathan (who looks like Vincent). Anita Hooson's “The Final Threshold...and Beyond” is a non-graphic, highly romantic “first time” story. Other fiction by Prosser, Lisa Wildman, and brief pieces by Dianne Smith, Carolyn Lynn, and Barb Gipson. Occasional poetry, too. Art by Gipson, Dragon, Judy Ley, and Rose Marie Badgett. [5] 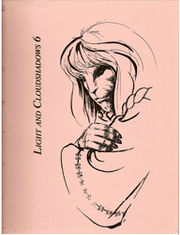 For our personal pan in this crazy dance... On bended knee, with hands clasped and eyes downcast with much humility... we beg you, our audience receiving the work of our hearts, please know that some stories are dragged, kicking and screaming into existence, past writer's blocks and tribulations from the often all-too-real pain of living in reality...Stories are sometimes painstakingly created at 3:00 a.m. when the world sleeps and we feel very, very alone with nothing to keep us company except computers, Darjeeling tea and Chopin Nocturnes. We try very hard to please you, and you may not know that such creativity is a fragile, delicate discipline, easily broken past repair, past the ability to create any more gentle fantasy words with your beloved characters. Please...try to be gentle with us when you write us...if only for the sake our being able to produce more of these magically-spun-worlds-on-paper that you love so much.

The dedications...as always, with gratitude: ...to Mr. Ron Perlman, for his endurance. ...to Mr. Roy Dotrice... Always a gentleman. Always a father. ...to Mr. Ron Koslow, for giving us cool, safe tunnels to play in when the world grows too weary. ...to Cecelia, for lions and turkeys. ... to Sharon, for midnight discussions and ideas on "fhwyQ-ing" ...to Phyliss and Barbara (NO BARS!! NO BARS!!); S.H. (for all patience); Joan (for stern words of support); and Lisa W.(for wanting us to play). ...and finally, for Jack. who's always there; and for that beloved six-foot-two leprechaun, Wills... and his tiny, transparent

faeries living at the bottom of the garden.

Continues to be an impressive, must-have series of zines. This one is definitely 4th season, with some young Vincent material, as well. The standout story here is Swope's “Homecoming,” showing the aftermath of V's return to the tunnels with his son, whom he frustratingly can't hold-because his hands were so badly burned, wrenching the door off Gabriel's cage. Devin and Diana to the rescue! Well researched, well dramatized, and entirely convincing. And, for fans of industrial-strength cute, there's Jacob's antics in “F is for Fhwy!” by Prosser. Jacob here, incidentally, is identical to Nathan in P/S Continued Classic stories (including A Tale of Two Kitties); even his battered toy rabbit is identical. [6]

The 6th volume of the series continues with five stories. 'F is for FHWY!' is another installment in the adventures of Vincent and Catherine's spirited son, Nathan. In 'Crown Of Thorns,' we follow Catherine's spirit through the events of the 3rd season and beyond. Diana appears in two stories. In one, she and Devin help the injured Vincent take care of baby Jacob; in the other, an elderly Tunnel-dweller helps Vincent understand that Diana is his destiny and Vincent takes the first step beyond his grief towards her. The last story of the zine is a young Vincent/Devin tale. [7]