There are a number of BaB zines with a variation of "Tunnels" in their title, for a disambiguation see Tunnel.

Tunnels is a het Beauty and the Beast anthology, one of the first zines published in the fandom.

Art is included at the publisher's request. 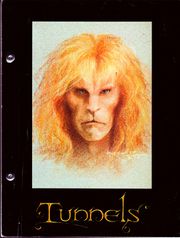 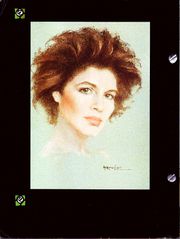 back cover of issue #1, Pat Horowitz

Tunnels 1 was published in October 1988 (third reprint was in June 1990) and contains 188 pages. It was edited by Barbara Storey, Victoria H. Clark, Karen A. Swanson, and Mary Ann Drach.

The story "Unmasqued" was made into a play at a May 1991 Creation Con in New York City. The story's author said:

I want to give a special thanks to Carol Cornicelli [1] who gave us all an unusual treat. Carol, a very talented actor/director/ make up artist/singer, took a story of mine from TUNNELS Vol.1 called "Unmasqued," and made a play out of it, which she presented for us on Saturday night. I can't tell you what a thrill it is to hear words that you have written being spoken and interpreted by another; it was a wonderful experience, and one I'll never forget. At the end of the play, "Vincent" and "Catherine" danced to 'The First Time I Loved Forever," and it was beautiful. I'm hoping that Carol will be able to recreate the event for us at St. Louis next summer. [2]

Once upon a time ... in New York City . . ." two people (Vicky and Barbara—and, yes, we know we weren't the only ones) decided to tune in a new television series, just for a laugh. "A fairy tale, set in modern-day New York? What a joke!" they said. "This ought to set back the status of women on TV at least 10 years!" But they watched it anyway, and when it was over, they turned to each other and said, "This is good! This is really good. I don't believe it! Vincent is amazing! Catherine is fantastic!" And then they called their friends Karen and Mary Ann and said, "Isn't this show great? Don't you love it?" Since they all were (and continue, passionately, to remain) not only major STAR TREK fans but writers and zine editors as well, it was only a matter of time before talk of a zine began to grow. (Since they were all also known as died- in-the-wool STAR TREK purists, this news was a major shock to many of their friends. Barbara—being the most rabid Beast fan of the group—takes the blame/credit on her shoulders.) And that, gentle reader, is how TUNNELS came to be.

Also from the editorial:

There are a couple of credits to be given: First, in Kim Prosser's story, "Crystal Clear," you will notice that the dialogue on the third page seems very familiar. It is taken verbatim from the episode "To Reign in Hell," written by Howard Gordon and Alex Gansa. Likewise with the quote at the beginning of Madalena Mumford's "Father to Son," which is from the pilot, written by Ron Koslow. Second: Karen would like to point out that the more discerning of our readers will probably notice a certain superficial similarity between Barbara's "What My Heart Will Be" and the episode "Promises of Someday." She would like to assure those readers that she and Barbara discussed "What My Heart Will Be" in detail some time before "Promises of Someday" was aired, and that Barbara's story comes solely from her own imagination.

Stories spinning off from the 1st season. "What My Heart Will Be" by Barbara Storey involves Mitch Denton, young Vincent and the carousel. "Dark Spirit, Bright Morning" by Rose is set after the episode "Dark Spirit;" Vincent fails to leave before dawn and gets stuck in Catherine's apartment all day. "Crystal Clear" by Kim Prosser, a return from "To Reign in Hell," is a story involving Catherine doing "lovelocks" in Vincent's hair. [3] 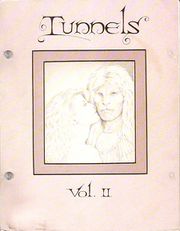 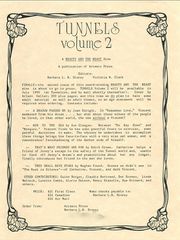 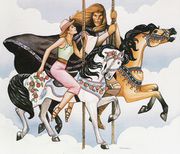 issue #2, interior art by Sue K, also used as the cover of the con zine for Tunnelcon #2

Tunnels 2 was published in July 1990 and contains 251 pages. It was edited by Barbara Storey, P.S. Nim and Victoria Clark.

One description of this zine:

Classic zine. Some poetry. A novelette, "Run to the Sea" by Sue Glasgow, accounts for the period between "No Way Down" and "Masques," dramatizing, among other things, Vincent's illness and the truce Father and Catherine arrive at to help Vincent heal. In "A Shadow Passed By" by Joan Enright, we follow the lives of those characters in the alternate reality of "Remember Love," whom Vincent met...and the changed realities that then flowed from that brief contact. "They Shall Have Stars" by Meghan Found is a counterpoint to the end of "The Rest Is Silence. [4]

From the editorial, one which comments on the last two years in Beauty and the Beast fandom:

And our fandom has endured much... From delayed second season, to cancellation, to resurrection, to third season, to second cancellation, to syndication and hopes for B&TB's return. Who would have guessed, two years ago, that Vincent and Catherine's beautiful love story would end in such tragedy; who would have guessed that a fandom that sprung up from that love would handle the changes so badly? And we have handled it badly. The third season divided fandom as if with a knife; people exchanged many terrible words because their vision of the show was either lost (those who didn't like third season) or taken away from them (those who liked third season) by cancellation. Fans blamed other fans, and there has been intolerance from both sides.

But we believe that fandom will rise above all this. Liking or disliking third season does not invalidate one very important point--we are--all of us-BEAUTY AND THE BEAST fans. The thing we know now that we, perhaps, did not know before is that we all are fans for different reasons; for the romance; the relationship; Vincent; Catherine; the tunnel society; etc These differences should be celebrated, not condemned. This zine contains many different visions of Vincent and Catherine, visions that reflect the inclinations of the authors, and ours as well, since we chose them. Another zine reflects another's viewpoint, etc. All these viewpoints are valid. All opinions about B&TB—expressed in calm, rational, but passionate discussion among fellow fans-are valid, and should be voiced without fear of being labeled or chastised. There is room for us all here, if we can learn to make room for each other. Already signs of healing are beginning to be seen in some of the letterzines; people are actually beginning to discuss B&TB again, not just how they feel about third season. New zines are proliferating, new fans are still finding the show and more will when the Family Channel starts their syndication this fall. We plan to do many more issues of TUNNELS, expressing our own vision of B&TB, which is Vincent and Catherine together, forever.

BEAUTY AND THE BEAST lives ~ in our hearts, in our family of fans, and hopefully, someday, on the screen again. And we are the guardians of the dream for Catherine and Vincent, and for each other. Take care; reach out to one another, be well.

The author comments on "There Will I Make Thee a Bed of Roses":

This story was written in 1990 as an antidote to the 3rd season story line. I know now more of how and why and what happened and of the originally planned arc, but what has not changed, even with all that truth beyond knowledge, is that I cannot open the cellophane wrapper of my S3 dvd.

Yes, I bought it. Financial support given, but never again will I sit through that nightmare. And I believe it was all a nightmare. We just didn't get to see Vincent wake up.

We had a small watcher's group back then, all women save one lone man. He got an earful, I'll tell you. We had a wonderful time together. Mid-winter of 1990, after *it* all fell apart on our tv screens and in our hearts, we held a Winterfest of our own. Much planning went into a multi-course meal and we had red and white roses on our plates and a central crystal vase which we passed each to the other. We put our rose in while making our own statement of what BatB and our friendship circle meant. It was very moving. These were great people and people who might never have met except for BatB.

I wrote this story in protest, chugging it out on a borrowed computer, my first experience at word processing. I was not then and am not now that great a typist. (Fast, yes. Accurate, not so much.) I planned only to read it aloud at our Winterfest. Another in the group (she must have proofed it), unbeknownst to me, sent a copy to Barbara Storey, whom she knew from Star Trek activities and who had produced a BatB zine or two already. One day I got a call from Barbara – she wanted to include the story in an upcoming zine! And I learned that fan fiction existed. Until recently, I had no idea that so many fanzines were produced or that an online fan community still dreamed. [5]