You may be looking for the Beauty and the Beast novel: Of Things That are Not but Should Be. 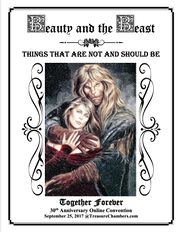 front cover, "derived [by an unknown fan] from an original painting by Olivia de Berardinis"

Of Things That are Not but Should Be is a 2017 Beauty and the Beast (TV) 400-page digital conzine for an online convention celebrating the 30th anniversary of the show.

From the title page: "A Retrospective Fan Fiction Zine Celebrating 30 Years of Fan Fiction. Featuring previously published stories, art, and poetry, inspired by the characters so beautifully brought to life by Linda Hamilton and Ron Perlman from 1987-1990."

The title of the zine (and con) is from "The Picture of Dorian Gray" by Oscar Wilde.

Comments from the Con Chair

From the zine, words by the con chair, Angie:

When it was announced in late 2016 that the 30th Convention in Los Angeles was not going to happen, I had already promised that there would be an online con. It was originally going to launch at the same time as the “physical” con in September.

So, suddenly I was faced with having to launch the online con and had to decide how that was going to manifest. I made three lists: what I wanted and thought was possible; what I hoped was possible; and what I wanted but which realistically was unlikely to happen. This would be the biggest special feature I had ever done. So I decided not to worry about the second or third lists, and concentrate on the first list. I also decided that this had to be a year long celebration, or it would be technically impossible to post it all.

So I set a short deadline and the 30th OnCon was launched in January 2017. And I resolved to have the a smaller, unique celebration page just for September 25.

Naturally, we agreed that there had to be a conzine to coincide with September 25th. Since our celebration was online and free, the conzine had to be as well - and be downloadable as a digital file.

From the start, we also all agreed that there should be no attempt to raise money for a charity. The OnCon had to be completely free to anyone who wanted to visit, with no obligations implied.

The 30th OnCon and this conzine (and the retrozine), have morphed from a rather nebulous blob into a butterfly of stellar proportions, involving dozens of people, hundreds of submissions and thousands of emails. None of this would have been possible without the modern age of communication – and a team willing to do literally anything to help.

Fans near and far, old and new, have supported myself and my wonderful team since the very first week. As material has been posted, more has come forward. The OnCon would not have been possible without all of you, who still think fondly of our series.

Comments from the Zine Editor

The main editor was Barbara, and this is from her comments in the zine:

When the pilot episode of Beauty and the Beast, starring Linda Hamilton and Ron Perlman, aired on September 25, 1987, no one, not even the creators and actors, had much hope that it would succeed. But succeed it did, with a capital S! For many it was love at first sight, or first episode, as in my case. Evidence of that was the fan fiction that began to appear almost immediately. It’s impossible to say how many people have fallen in love with the show over the last thirty years, but the love itself is undeniable. New fans, some of whom weren’t even born when the show originally aired, are still finding their way into the BATB fandom after all these years. Some are still writing fan fiction to satisfy our dream of a happy ending for the two beautiful, star-crossed lovers.

Even after the powers that be at CBS pulled the plug on our beloved show, the fans’ love affair with Vincent and Catherine continued. CBS didn’t realize at the time that Beauty and the Beast isn’t over until the fans say it’s over! And thirty years later, that beautiful dream originally conceived by Ron Koslow, is still going strong.

In the early days of fandom, despite the fact that the internet was still in its infancy and most people couldn’t even afford a computer, hardcopy zines and newsletters abounded. They were typed on typewriters and then xeroxed and collated by hand. They were sold via snail mail and at early conventions. Every zine was painstakingly made with love, and every BATB fan knew that “with love, all things are possible.”

Unfortunately, many of the thousands of stories that reside within those zines and newsletters have never found their way to the internet. Many wonderful stories that have been forgotten, are waiting to be rediscovered in the zines lovingly preserved by the caretakers of the Crystal Rose Lending Library. They are available to borrow for only the price of postage and a promise of timely return when finished.

The sampling of stories and poems in this volume have all appeared elsewhere online and in zines before. They are only a small part of the copious amount of fan fiction and other art that has been created over the years due to the love people have for Catherine and Vincent.

The purpose of this zine is not necessarily to compile the best stories of the last 30 years, that would difficult, because it’s too subjective. Our purpose is merely to recognize and honor all of the faithful fans who have kept, and continue to keep, the beautiful dream alive.