Masquerades (Beauty and the Beast convention)

Masquerades is a Beauty and the Beast convention. Its con zine is Masquerades. 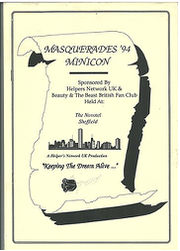 cover of the 1994 convention program

From Gwen Lord in Chatterbox #10:

Helpers Network UK were proud of the fact that in 1991 they were able to launch their first Beauty and the Beast major British Convention - Masquerades/91. It was held at the "Grand Hotel" in Birmingham, England with over 350 in attendance there. The hotel is a listed building and very Victorian, and had an atmosphere which blended well in the B&B theme. It wasn't long before messages were being sent on the pipes etc. Guests that year were Roy and Kay Dotrice, David Greenlee, Armin Shimerman and Kitty Swink his wife. The same hotel was again chosen for the 1993 Beauty and the Beast Convention.

Masquerades/93 which was once again well attended, with guests Roy Dotrice, Ellen Geer and husband Michael Alsop, Jo Anderson, Armin Shimerman and Kitty Swink. It was decided to have a mini-convention next, to fill in until the next "big one". It was decided to use a different location and the Novotel in Sheffield was chosen. Just over 100 attendees supported this min-con.

Masquerades/94 held the weekend before the Bank Holiday, August 19-20 and 21st. A new idea was tried, that of having the Beauty and the Beast British Fan Club join Helpers Network UK. The result of this partnership was a pure joy, as ideas and energies were pooled for the fans to enjoy. Being smaller, it was all so easy to get to know the guests well and feel at ease with them. David Schwartz the B&B co-producer was there, as was his friend Jamie Murray, who when in make-up as Myrh is marvellous. Roy Dotrice had been dreadfully ill since late June/94 and his attendance was very 'iffy', but Roy being the trouper he is, decided not to let his fans down and against everyone's opinion and, his doctors wishes, travelled across England to attend, be it only for one day. Roy was so upset at missing the TunnelCon 3 in Vegas, but was too ill to travel all that way at that time, with Lymes Disease, which he had contracted from a tick from a deer. The Q&A time, signing for the deaf viz Laura's Cavern autographs, art, ball, auction, disco, dealers room and TV room, all made for a fabulous time. Roy Dotrice who has a British based fan association, run by yours truly, gave the fans a rare treat, as Roy went behind the dealers table to sell and promote the sale of his clubs Christmas cards, using his own art on the front with 10% of sales going to the Childline Charity, this proved a very novel idea.

The next convention will be run entirely by the Beauty and the Beast British Fan Club, with convention manager Amber James. This will be a major convention once again, but full of brand new ideas. Basically the same team will be doing it, with a new committee. It will be the Bank Holiday weekend, at the end of May 1996. It will take place this time in London with many B&B guests and even a trip on the river is hoped for. It will be longer, from Friday noon to Monday noon. Advertising worldwide will start soon, so do not miss the next opportunity to gather together as a family. Re-named, it is - "A Moment In Time - The Beauty and the Beast International Convention". Send to Amber or Gwen at Helpers Network UK for details. Whatever you do, don't miss it, start saving now.

Masquerade III was held on May 1994 in Sheffield, UK. Images can be found here, here and here.