From Fanlore
(Redirected from VCRs)
Jump to: navigation, search 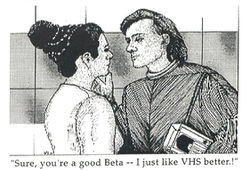 "Sure, you're a good Beta -- I just like VHS better!" This Star Trek: TNG cartoon was printed in Critical Mass #3 (1994). It was re-printed without permission from the original creator, and to add insult to injury, the caption was altered. See The Star Trek Historical Calendar for the original version. 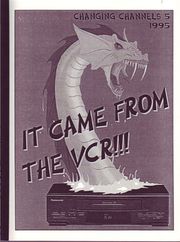 cover of the zine Changing Channels #3

A video tape recorder (VTR) is an electronic device capable of recording broadcast audio/video signals onto magnetic tape. The common form of VTR is the videocassette recorder (VCR), which uses tape cassettes. Earlier VTRs could also be reel-to-reel.

Home VCRs first became available in the early 1970s. The first system to be successful with consumers was Sony's Betamax in 1975. This was quickly followed by the competing VHS (Video Home System) format from JVC, which eventually proved the more popular and took over the market.[1]

The first machines were extremely expensive and very few fans could afford them. [2]

In July 2016, Funai Electric announced the shutdown of the world’s only remaining VCR production line. [3] Some electronics companies still sell reconditioned or refurbished units, with many available on eBay.

Fans first started to be able to record things off of television for home-viewing in the late 1970s. In the context of later controversies over private individuals making unlicensed copies, it should be noted that, when videotape recorders first appeared (in those pre-TIVO, pre-internet days), they were sold precisely for the purposes of private copying, for DIY timeshifting. Early advertising stressed the advantages of being able to tape off the television for later viewing, so that one could go out for the evening or on holiday without missing something on TV.

Technical availability was one thing. Cost was another. The machines themselves were very expensive, and there were other costs as well, ones that made this technology available to few fans. Blank tapes were initially sold for about $10 each; and many people therefore wiped the recording in order to reuse the tape. 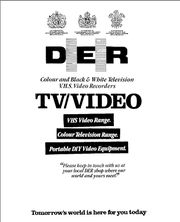 a 1986 ad printed in the Enterprise convention program

Film and television studios then made or licenced professional copies of many movies and some TV series. At first, relatively few were available; but, over time, an increasingly large library of material was released. However, these purchased pre-recorded tapes were expensive (more than double the price of movie admission). For example, in 1980, one company offered two episodes of Star Trek (from a selection of about nine episodes) on VHS or Beta format for $39 [4], a exorbitant amount even today. Furthermore, most non-fans were not much interested in rewatching the same tape multiple times. This limited the market for direct sales to the public. Instead, a significant video rental industry developed. VCR usage concomitantly shifted from home taping to home viewing. Many families acquired the habit of movie night—not going to the cinema, but staying in to watch a rental movie.

Initially, the expense of producing tapes meant that studios released many more movies (which would fit on a single tape) than they did television shows (which, with two one-hour episodes per tape, required a dozen or more releases to cover a typical North American season). Although eventually a number of popular shows were made available, episodes were released frustratingly few at a time. It ultimately became possible to purchase complete sets of some popular series (such as Star Trek and Babylon 5); but many other shows were never or only partly made available on tape. It was not until the cheaper DVD format became common that previous seasons of television shows were routinely and quickly made available for purchase.

When VTRs first appeared on the market, it was not possible to purchase professionally produced tapes of old television series. Even the most popular were released only a few episodes at a time; and the selection often omitted fan favourites. There was also considerable lag time before new shows were offered on tape. Fans therefore found it desirable to tape their favourite shows, whether in first run or rerun, in order to build up a permanent library.

Being able to record, and then watch, shows over and over again—something modern fans take for granted—was an amazing and powerful new ability. No longer were fans at the mercy of broadcast television's erratic schedules and often sloppy editing.

In 1984, a fan re-watched Star Trek: The Motion Picture, the uncut version, and this time in his own home. His remark shows the new-found power, and disillusionment, offered by the VCR:

The main goof about the extra footage is a major blunder. They put some more footage in about when Kirk dons his spacesuit to go after Spock when they are inside Vejur... they show Kirk launching himself from the airlock to go after Spock, there is a long shot which clearly shows that the whole thing is a set! There appears to be scaffolding and support beams around holding up something that looks like part of the primary hull of the Enterprise! I can't believe anyone could be so stupid as to put this back in! Perhaps they figured since it was such a short scene, nobody would notice - maybe since it was dark they figured we wouldn't be able to tell what it was - but with a VCR you can rewind it and look again - and I did. [5]

In 1988, a fan speculated on some changes in fannish socialization at cons:

It was the advent of video which changed the face of conventions. At first, the technology was too expensive for the average 'man on the street,' but conventions could afford to hire the equipment, and although blank tapes were £15.00 a time, a secondary programme of available episodes began to take shape, splitting the attendees into smaller groups. The 'one big happy family' feeling began to dissipate; I'm told of a convention where Trek episodes were available 24 ours a day on the hold's in-house system resulted in some people never leaving their rooms for the entire weekend!... Nowadays if an original Trek episode formed part of the main programme at a convention, it would have a very poor attendance indeed, and it seems that a higher percentage expect to be entertained 24 hours a day, rather than being prepared to make their own amusements. [6]

In 1991, a fan explained how the VCR can revive a fandom:

When Space: 1999 originally ran, I was lucky enough to live in a market where the show was uncut... Fan interest locally was very strong and supportive, and I found the very negative reactions given the program elsewhere somewhat confusing. Later when I had a chance to see how one episode ('War Games') was shown in three different markets elsewhere in the country, I began to understand some of the reactions a lot better. In all three cases, the episodes were cut down to about 45 minutes of actual story and the parts cut out were character scenes, pivotal story incidents, etc. leaving only the series' highly-touted special effects intact. In all three cases, the episode became a confusing, unwatchable parade of pretty special effect scenes. If you're interested in seeing this show uncut, check out your video stores. [7]

In 2015, a fan commented on the ups and downs of the value of fannish goods:

Back in the early 2000s I had the entirety of X-Files, BtVS, Angel, Firefly, and Smallville on VHS. We had a membership to Sam’s Club that we used exclusively for buying me blank videotapes. And I had two VCRs, which made me very popular in fandom back in the days when you could only see previously aired shows by bumming copies off someone. It took me five trips to the dumpster when I finally got rid of them. [8]

APA-VCR (1987) was an Apazine where members could publish their lists of video tape collections for exchange with other fans. Members also reported which television shows were going to appear in their area and volunteered to tape them for fans who lived somewhere else.

Fans in other countries where the TV shows didn't air (or not yet, or not in English), often copied the episodes for each other and the tapes usually included as many episodes as would fit on a tape because postage was expensive and fans sometimes shared these costs and the cost for converting a master tape from NTSC to PAL. The people receiving copies of copies of the master tape often had no idea where the episodes originally came from (people placed ads in genre magazines[9], asking for copies of this or that season of The X-Files, offering Highlander in return, etc.) and the fans who copied their own copies for fellow fans often included vids, bloopers and interviews from other sources to fill up every free second of tape with something fannish. Without title credits, these vids were as anonymous as the episode sources and few vids on these copied tapes came with credits. Copying these vids together with the source material was quite common in the 1990s.

A fan describes a disappointment, and considering the cost of overseas postage, what must have been a major blow to the pocketbook:

I exchanged tapes of X-Files episodes via mail with my first fandom friend, back in the mid-90s, but he lived in Europe and the tapes wouldn’t play on my North American VCR. I was so disappointed. [10]

Sometimes, fan recordings will be brought to the attention of the creators or distributors as a means of helping to archive lost footage. In the case of Doctor Who:

There had been quite a hullabaloo over the cliffhanger to The Deadly Assassin Part Three, which showed the Doctor's head being held underwater. After a complaint by Mary Whitehouse, the founder of the National Viewers and Listeners' Association, the BBC had physically edited the broadcast mastertape to remove the original freeze-frame ending. This meant that when it came to the story's commercial video release in 1991, there were several seconds of missing footage, which the BBC no longer held. It wasn't possible to precisely recreate the cliffhanger using the recapped material from Part Four, so for the VHS release - and for the later DVD release in 2009 - Ian [Levine]'s off-air Philips recording was called into action.[11]

It is no coincidence that, in 1981, the first commercial video to ever air on MTV was the hit song "Video Killed the Radio Star" which contains the lyric "Put the blame on VTR".

VCR features such as slow-motion and freeze frame allowed fans to see things in shows that they'd never been able to before. And, this new tool, of course, was the next step to Vidding.

In early 1986, a fan editor speculated about possible future changes in fanart for zines:

I think the problem [of dull, redundant art] is that most fan artists draw from photographs of the characters and rarely are these photographs conducive to action-oriented stories (often they are simply studio stills). In addition, portrait art sells better than action art at auctions so there is even less incentive to develop action art skills. It requires either an excellent artistic mind which can visualize and then, after considerable study, accurately draw this visualization or it requires "borrowing" action positions and backgrounds from various sources. I think with the advent of VCR's with freeze-frame and slow-motion we may actually see some of this art develop — if the editors start asking for it. [12]

Screencap from "Video History" website, focusing on the differences between Betamax and VVHS video recorders. Click twice for full size