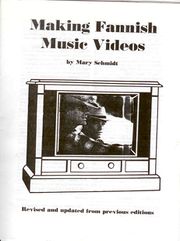 Vids were created using VCRs from the early 70s through the early 2000s—2002 was the first year that conventions received more vids on DVDs than they did on videotape.