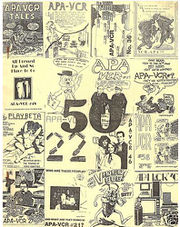 cover of issue #50 (image made up of previous issues)

APA-VCR is an apazine where members could publish their lists of video tape collections for exchange with other fans. Members also reported which television shows were going to appear in their area and volunteered to tape them for fans who lived somewhere else.

From an ad in Comlink #36: "An apa for the entertainment and communication of amateur video hobbyist. You don't have to have a VCR to join."

From Of Love and Hope Vol 1 (a Beauty and the Beast mailing list) a subscriber writes in 1994::

I was involved for over 10 years in APA-VCR which was devoted to television, movies and video taping issues. It came out in paper form six times per year. One of the formats used in the APA was "Mailing Comments" on previous issues..."

APA-VCR 50 was published in October 1987 and contains 146 pages. It contains letters from July–October. There were 30 members, 17 of them included their contributions.

Note: all of these images are from issue #50's cover or interior; some are poorly photocopied and/or not complete.