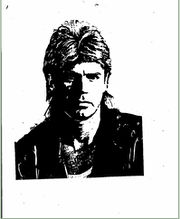 "Don't Mess with Mac" by MJRiddle 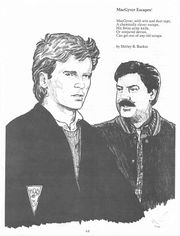 MacGyver and his pal, Jack Dalton, the artist is KOZ, it was printed in Our Favorite Things #7 (1991)

A highly intelligent, extremely creative guy named Angus MacGyver (known to his friends as MacGyver or "Mac") prefers using his brain (and not his brawn) to solve problems. Armed only with a Swiss Army knife, his knowledge of applied practical science, and whatever materials he had at hand, he saved the world (or at least his corner of it.)

Most of the fanfic was in zines, although like most late '80's/early '90's shows, the fandom transitioned through Usenet and online services like AOL to the Internet. The pervasive appeal of the show turned it into a cultural icon even years after it went off the air, with references in other, later shows like Stargate SG-1, Stargate Atlantis, Mythbusters, and Buffy the Vampire Slayer.

In 2012, a comic book was released entitled "Fugitive Gauntlet". It ran for 5 issues, written by Tony Lee and MacGyver creator Lee David Zlotoff.

Along with the comic book, Zlotoff recounted the 'origin story' of how he developed the MacGyver character. It is also a five-part series of blog-type posts: