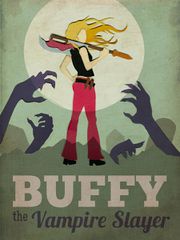 Buffy the Vampire Slayer was a television series created by Joss Whedon, based on the 1992 theatrical movie of the same name. (Whedon wrote the screenplay, but did not direct the film, and he was not fully satisfied with it.[1])

It premiered on the WB network in March 1997, although an unaired pilot was created before that. The first season ran for 12 episodes; it was a marginal success for the fledgling network and was brought back for a second season beginning in September 1997. It ran for five seasons on the WB before moving to another small startup network, UPN, for its final two seasons. Star Sarah Michelle Gellar was eager to move on from the show, and after some controversial developments and character arcs, ratings had deteriorated.

After the third season of Buffy, in 1998, one of the series' primary characters, vampire-with-a-soul boyfriend-of-Buffy Angel, was spun off into his own series on the WB.

Buffy is considered by many critics and viewers to be one of the best television series ever made. It combined horror, fantasy, drama, humor, teen angst, and action in a way no other series ever had. Buffy Summers was created as a sort of anti-archetype by Whedon; the small, seemingly defenseless blond girl who turns out to have enormous power—and enormous responsibility. The initial seasons began with a prologue that included information about what a Vampire Slayer was: "Into each generation, a Slayer is born. One girl, in all the world, a chosen one. One born with the strength and skill to hunt the vampires, to stop the spread of evil..." to which Buffy responds, in the first episode, with: "...blah blah, I've heard it, okay?" This was typical of the way the series skewered even its own seriousness. Most of the time, Buffy simply wanted to be a regular American teenage girl, like her friends Xander Harris and Willow Rosenberg, and not the one carrying the weight of the world on her shoulders. In the season finale of the first series, she even rejects her calling when she finds out a prophecy predicts she'll die that night, weeping that she never wanted to be the Slayer, and that she was "only sixteen" and too young to die. Nevertheless, like all true heroes, Buffy does do her job.

The series continues officially in the "season"ed comic book adaptations, starting with Season 8, as well as the one-shots Tales of the Vampires and Tales of the Slayers. It also has been continued in virtual seasons through a number of fanfic projects. Fray, a graphic novel published in 2001-2003, concurrent with seasons five, six, and seven of the television show, is also part of the canon.

Merchandising products associated with the show and with Angel include a large number of episode adaptations, novels and short story collections (generally considered not to be canon), many non-canon comics, script books and other factual material such as guides to the monsters, collectible figures and other toys, board games, computer games and a tabletop role playing game.

As one of the first shows to have an active Internet presence, fannish participation was a virtual smorgasbord for fen, with multiple fannish websites, email groups, and forums.

Thanks to satellite programming and wildfeeds, some fans had an early jump on the show, before its regularly scheduled air time and date, and posted reviews and episode summaries online. Other fans transcribed their own scripts, often with detailed disclaimers, from recording and rewatching the episodes. Initially TPTB, namely Joss Whedon, were supportive of these fan activites.

However many of these fans and websites were later subject to cease & desist letters during FOX's crackdown on fan sites. The best known of these may be AleXander's transcripts on The Slayer's Fanfic Archive. Their removal resulted in a fan petition to have the transcripts restored. Another site SlayMe.com contained episode transcripts, as well as other Buffyverse fan content. It had to revamp it's site, removing transcripts, following a C&D letter from Fox. Following this the administrators of SlayMe.com decided to host The Bringers, a fan group dedicated to protecting fan sites online, on their site.[2] SlayMe.com disappeared from the internet in Sept 2000. Other sites shared whole scripts or spoilers from the original shooting scripts. The best known of these, The Buffy Shooting Script Site, was also shut down following a C&D letter from Fox.[3]

As one of the first online fandoms, having access to complete scripts was important for reasons beyond theorizing or discussion. In a time before streaming, the sharing of scripts allowed fans to catch up on missed episodes, but it also allowed fans new to the series to enter the fandom. They allowed fans outside the US to stay up to date when the series would not be aired in their country until months after the original airdate.

Fan campaigns were another feature of Buffy fandom. Fans of particular characters or ships sometimes engaged in letter writing campaigns or bought ads in publications to thank TPTB and of course, highlight the importance of their favourite character or ship.[4] B/A fans took out this full page ad in the Hollywood Reporter to thank cast and creators for their depiction of the Buffy/Angel romance.

Many other campaigns were reactions to actions taken by the network. Stand Up for Buffy was a campaign that was organized after the postponement of two episodes, Earshot and Graduation Day Part 2, following the Columbine School massacre. Fans organized under the tagline “The Fans Stand Up for Buffy. Why doesn't The WB?" and raised funds for a full page ad in Daily Varity.[5] When the WB announced the airdate for Graduation Day Part 2, they were kind enough to forward a copy of the press release directly to organizers. [6]

In the early days of internet fandom, Buffy fans were very aware that they risked legal action as a result of their online activities. Several years earlier, FOX had begun its crackdown on X-Files sites and by 1999, several well known Buffy sites were shut down following cease & desist letters. This led to several campaigns and fan actions. Operation: Blackout was the shutdown of multifandom fansites for one day, to highlight the networks heavy handed actions against fansites. Buffy's Bringers was a group of fans offering support to at risk fans and websites, from multiple fandoms. While it's difficult to measure the success of these campaigns, they did promote discussion of fair use (which wasn't yet law) and existing copyright laws within the fandom.

The fandom is the reason why thefanlistings.org exists, since someone had wanted to find out how many Buffy fans were out there on the Internet, leading to the first fanlisting.[citation needed] The Fanlistings Network was originally founded by Janine, a Buffy fan who is credited with creating the first online fanlisting. Her site Slayer's Empire was opened on May 3, 2000 and connected Buffy fans. The Fanlistings Network was also founded by Janine in 2000, and aimed to connect fans from multiple fandoms. Janine later stepped aside in 2002 to focus on her other sites.[7]

Creator Joss Whedon has been involved with his fanbase more than most showrunners. Himself a fan, he's put his own experiences into his series, especially on Buffy, even making a reference in one seventh-season episode to posting fanfic online. He frequently interacts with fans on the site devoted to his work, Whedonesque [1]. One of his most famous instances of support for fans came in 1999, regarding the 18th episode of season three and the season finale. The Columbine school massacre had recently occurred, and the WB decided to pull both "Earshot," which dealt with Buffy's sudden ability to hear people's thoughts—one of which is someone planning to kill people on the Sunnydale school campus—and the season finale, "Graduation Day Pt. 2" (because of violent activities—including blowing up the school library). When the series was aired in Canada on schedule, bootleg copies of the latter episode became widely available, and Whedon was quoted as encouraging people to get it, saying "Bootleg the puppy."

He says he has an ambivalent relationship with fanfiction, both liking it and also feeling concerned about it, but he has frequently shown his appreciation for fan-made vids of Buffy and his other series. In the early days of Buffy fandom, Whedon spoke out against Fox's attempts to shut down fan web sites devoted to Buffy and other Fox shows, such as The X-Files.

Whedon became so infamous for introducing surprising (and often heart-wrenching) plot developments and character backstories in Buffy that fan writers invented a term to describe when new canon contradicted what they had written: to be Jossed. The more heart-wrenching plot twists also resulted in the oft-repeated mantra "Joss is evil."[8]

In 2005, an attempt was made by Fox lawyers to stop the live-action showing of the musical episode "Once More, with Feeling," despite the fact that Whedon had publicly stated he had no problem with the event.

Many academics were/are fans of Buffy and devoted enough scholarly attention to it with papers, edited collections, and conferences that the term "Buffy studies" was coined. See The Encyclopedia of Buffy Studies (archive link).

Some have accused the early Buffy conferences of being fan conventions in disguise.[9] The first international Buffy conference, "Blood, Text & Fears" was held in the UK before the series had finished, and before season 7 had aired in the UK. Guest speakers who referenced the season were often greeted by protests from fans who did not want to be spoiled. Screenings of the first three episodes from that season were in such high demand, that organizers struggled to find a room large enough to show them. [10] Some also questioned the use of video clips and images to add weight to academic arguments. Academics were aware and sometimes uncomfortable with the fannishness of early Buffy conferences. At the Tennessee Slayage Conference in 2004, a spoiler policy was put in place as the series finale of Angel had yet to air. [11]

A very small number of attendees at conferences have also been dismissive of fans activities at conventions, in an effort to distinguish themselves from those fans and events.

[I attended] the international Slayage conference (an academic conference, not a fan convention with costumes, just to be clear. I wanted to talk about it, not dress up as Willow. I have some standards.)[12]

Buffy the Patriarchy Slayer: many links to academic articles.

Challenges, comms, and sites from the last 4 years or so) (please expand!)

The Buffy and Angel fandoms had a strong digital vidding community. Among them:

The Buffy vidding community also offered vidders numerous awards, some of which are archived here.

For a list of Buffy vids on Fanlore see Buffy the Vampire Slayer Vids.

For a list of Buffyverse fanfiction on Fanlore see Buffyverse Fanfiction.

For a list of Buffy archives on Fanlore see Buffyverse Archives.

Neither Buffy nor Angel fandoms were fanzine-centric and the majority of the fan fiction and artwork is published online. There are several e-zines in the form of fan fiction publications and/or newsletters. A partial list can be found here.

For a list of Buffy Zines on Fanlore see Buffyverse Zines.

Various fansites were created for the Buffy fandom. For a list of Buffy fansites on Fanlore see Buffyverse Websites.