Willow Rosenberg is a regular character for the entire run of the TV show Buffy the Vampire Slayer and is a popular character in Buffy fandom and fan fiction. She is played by the actress Alyson Hannigan. 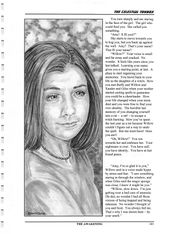 the artist is Susan Nemeth, printed in The Celestial Toybox #16 (2000)

Willow is Buffy's best friend and a member of the so-called Scooby Gang for all seven seasons. She is a nerd and a computer geek, although later seasons de-emphasize her academic and technical interests in favor of focusing on her increasing knowledge of witchcraft; she starts practising magic in season 3 and is considered a very powerful witch by the end of the show.

Willow's "good girl" image in the early seasons was gleefully contrasted in two episodes featuring a Mirror Universe version of Willow as an evil, sexy vampire in leather pants, sometimes referred to by fans as Vamp!Willow or Evil!Willow. Evil!Willow is a more ambiguous designation; Willow became the Big Bad in season six to get revenge on the murder of Tara.

In the first three seasons, Willow is shown having crushes on boys exclusively. She first has a hopeless crush on her other best friend, Xander Harris, but then dates Oz (who turns out to be a werewolf). Oz is quite smitten with Willow, and Willow gains confidence in the relationship. In the fourth season, however, Oz leaves the show, and Willow starts dating Tara Maclay. In this relationship, Tara was the shy, cautious one, while Willow was the one with confidence. Tara is also a witch, and the show uses their magic as a metaphor for the blossoming relationship.

The show's coy use of metaphor in place of definitive statements contributed to early fan arguments over whether or not Tara and Willow were actually dating. However, relationship denials continued after "New Moon Rising", the episode intended as Willow's coming out moment. In fact, there was at least one usenet discussion debating "Tara's lesbian spell on Willow."[1]

From season four onward, Willow canonically identifies as a lesbian.[2] Some fans felt that Willow's gay identity devalued her relationship with Oz and that she was actually bisexual.

Many fans were upset by how the murder of Tara, written to trigger Willow's transformation into Evil Willow, evoked the homophobic dead/evil lesbian trope of Hollywood films. See Fan reaction to Tara's death for more.

When the series ended, Willow was in a relationship with Kennedy, a slayer in training activated in the final battle, whose reception with fans was mixed. To some fans, Kennedy seemed to have only a sexuality in common with Willow. The relationship continued in the S8 comics.

In season 2, Willow began to learn magic and was the person who restored Angel's soul in the season finale. Her development as a witch lead to her becoming overly reliant on magic. In season 6, Willow is shown to have an addiction to magic, which writers hoped to use as a metaphor for real life addictions. This story arc was not viewed positively by all fans.

For me as a fan of her, it was great seeing so much character development. In Season 6, Willow starts spiraling out of control. [...] . She needed magic to cope with every day life, just like some people start to develop dependency on drugs. I felt it was all believable. I was moved and touched by this Willow arc. [3]

She struggled with her addiction, she spiraled out of control, she was saved and brought back and she went to rehab (though she didn't finish) and the next part of that should have been dealing with how Willow felt and how she dealt with what she did. But it wasn't. Apart from her struggle with magic in S7 and her fear of what she was, there was nothing about Willow's growth as a person in S7, or after. She went right back to being the person she was. It was like it never happened at all, and, considering this is supposed to be an addiction storyline to mirror drug addiction, that's just not realistic in the slightest. [3]

I don't like that Willow's so focused on magic. She acts like it's all she is, but she isn't. Willow was a major and useful part of the team WAY before her magic got good enough to be helpful, and yet, that's completely forgotten. What about Willow's intelligence? When was the last time anyone talked about how smart Willow is? When was the last time she relied on that intelligence to work the problem instead of turning to magic or even a time when magic wasn't the outcome?[3]

Willow is identified as Jewish in several lines of dialogue, but some Jewish fans and others were frustrated that this aspect of her character was not developed more, especially since confirmed Jewish characters are rare in most fannish sources. Some fans have also observed that Willow's Jewishness was more prominent in earlier seasons, but that as she became a practicing witch and as she embraced the identity 'lesbian', she left her Jewish identity behind. (See also the page on Judaism and Fandom.)