Uber is a popular fanfic genre in the Xenaverse.

The term was coined in 1997 by Kym Taborn, a fan who created the online Xena journal Whoosh!.[1]

An Uber-Xena story takes the essence of the characters and places them in another time, another place, or another reality.[2] The uber characters do not have the same names and do not have to be mirror images of the canon characters. Sometimes they are descendants or reincarnations; usually they resemble the originals physically, and they share the same type of bond.

The term Uber migrated to other fandoms, including Buffy the Vampire Slayer fandom, where Willow/Tara Uber fiction appeared. The concept of Uber fanfiction broadened to 'refer to fan fiction of any genre, in which the main characters are translated into a different setting than normal' with uber characters retaining their canon names and personalities.[3]

The Uber genre was prompted by the Canon AU of Mel and Janice in the episode "The Xena Scrolls", which aired on the 13th of January 1997. It is believed that the first Mel/Janice story was Bat Morda's Is There A Doctor On The Dig, posted in March 1997.[4]

A Meeting of Chance by WhiteCat, regularly cited as the first UberXena fic was posted in January 1997. While this story didn't have all the elements of a traditional UberXena story, namely the soulmate bond between the ÜberXena and ÜberGabrielle, it did contain many other story elements. The author obviously agreed and the story was updated sometime before 2000 to include the following

This is the ORIGINAL Uberxena story. It is also the original Uberherc story. All this from one little story, which has been called the, "shot heard around the world".[5]

Whoosh! cites Get Your Kicks on Route 66 by Miss and Aisa, as the first recorded attempt at an ÜberXena story featuring the theme of soulmates. This was an incomplete serial short story which was posted on a private mailing list in early June 1997.[6] They also state that the first completed ÜberXena was a western by Della Street, called Toward the Sunset, which was posted on a private list on June 14, 1997. Whoosh! also claims that the first publicly posted and complete story was The Hitch Hiker, by Bongo Bear. It was posted on July 22, 1997. [6]

However other disagree and point to Darkone's Warrior's Heart as the first ÜberXena story; written in January 1997, and publicly available the following month.[2]

That same month, the weekend after XENA SCROLLS first aired on TV, A Xenite named Darkone released the story WARRIOR'S HEART on a private mailing list. With the uber-Gabrielle as a rock dancer and the uber-Xena as her bodyguard, the story was publicly available on the Web by February 1997.[7]

See Whoosh! for more information on the development of this trope and the different categories of Uber stories

See The History Of Xena Fan Fiction On The Internet by Lunacy (1998) for information on the development of Uber in the context of XWP canon developments and fanfiction trends. 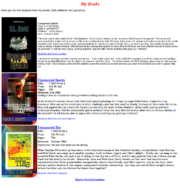 In early 1999, Tropical Storm by Melissa Good[8] became the first commercially released Uber-Xena novel, which started a trend that led to more and more Uber-Xena print publications[9] and the creation of a few small publishing houses.

A fan in 2014 remarked about Xena fandom and fiction:

I'm a big lesbian fiction reader, but not a huge Xena fan. A really remarkable percentage of lesbian romance/adventure novels from the mid-90s through the early 2000s are Xena fanfic with the serials sort of filed off. I say sort of because Xena canonically has Xena & Gabrielle being reincarnated in different lives where they don't remember their pasts, but find each other anyway (and get married in at least one instance). This gave fans the room to create an entire genre of "Ubers" with canon support, many of them modern day. Naturally many were published almost unaltered and didn't particularly need to change anything, even the names were usually different already. If you run into a lesbian romance with a tall, dark, very physical lead and a short, blonde one (especially if they're both viewpoint characters) check the front-matter or epilogue. Chances are you'll see a Xena or bards references.[10][11]

Not exactly. AU (Alternate Universe) fiction generally supposes that the regular background of the characters occurs up to a certain point, where the story's background then diverges from the original - for example, Buffy fiction in which Buffy was not raised from death after the end of season five, or in which Tara was not killed at the end of season six (I'm quite partial to the latter idea).

Uber fiction is fiction in which only the natures of the characters are retained. The characters may have lived lives completely different to those of their original setting, but (due largely to the indulgence of authors) their personalities are unchanged. Uber is a sub-genre of AU, with particular requirements.[3]

On UberXena vs Immortal Xena stories (posted 2007 or earlier):

As fanfic has evolved, we've been seeing more and more stories which blur the line of what is considered "uber". There are stories that have the Xena or Gab from Ancient Greece becoming immortal and living on into the present. There are stories where the reincarnations suddenly remember who they once were and become Xena or Gab. For the purposes of my fanfic reviews, in terms of the physical, if the body involved in a story is the original one from Ancient Greece then I do not consider that uber - that's simply an immortal Xena or Gab. If it's a different body then I look at the soul's personality and memories. If the character remembers every single thing from Ancient Greece and her personality was formed during that period then I lean toward NOT uber. If the personality is very much a product of the more modern environment and there are only a few or no memories of the past, then I will tend to see it as uber.[2]

On the definition of Uber and fannish drift of that definition (2010):

So for Xena fans, the *soulmate* concept was what really resonated. But the soulmate isn't even a consideration for most fans using this toolbox today; in my estimation, they're writing what Xena fans back in the day would have seen as faux uber. At a guess, I'd say this is due to a combination of the fact that 1) there were Xena fans who drifted into other fandoms, and took that toolbox with them and 2) if you were just reading the fic and were active in the show discussion side of the fandom, but didn't actively discuss the fanfic with people, you could easily miss what the Xena fans thought were the important symbolic concepts involved and just see the entire uber movement as Xena and Gabrielle in AUs.

I just -- I have to giggle, because I only read in Xena fandom, didn't otherwise participate, but picked up on uber = soulmated other lives pretty quickly (I think because of the ones I happened to choose to read). Then a few years ago, I got into an argument with a friend (the one who drew this icon for me, actually) about the definition of "uber" and I held to my soulmate theory and she held to her "alternate name for AUs" theory and eventually I retreated, all sulky. Now I feel JUSTIFIED. (I am apparently the champion of the fannish grudge.)[13]