Tropical Storm is an alt uber novel by Melissa Good. The main characters, Dar Roberts and Kerry Stuart, are probably the best known modern-day incarnations of Xena and Gabrielle.[1]

A tale of heartache, longing, family strife, lust for love, and redemption. [...] Dar Roberts, corporate raider for a multi-national tech company, is cold, practical, and merciless. She does her job with razor-sharp accuracy. Friends are a luxury she cannot allow herself, and love is something she knows she'll never attain. Kerry Stuart left Michigan for Florida in an attempt to get away from her domineering politician father and the constraints of the overly conservative life her family forced upon her. After college she worked her way into supervision at a small tech company, only to have it taken over by Dar Roberts' organization. Her association with Dar begins in disbelief, hatred, and disappointment, but when Dar unexpectedly hires Kerry as her work assistant, the dynamics of their relationship change.

Lunacy says about TS in her review:

Missy's many strengths as a writer are quickly in evidence throughout the first parts of this story - rich descriptions that engage your every sense - multi-layered characterizations that draw you into the psyche of the characters and a story very much grounded in human emotions, human frailties and strengths along with the raw vulnerabilities that ultimately make us all seek the comfort of another soul. Working in the Information Technologies industry herself and a native Miamian, Missy also imbues the story with a very realistic feel.[2] [3] 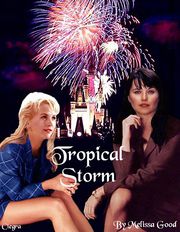 Released to the net in September 1998, the novel was an immediate success[4] and several sequels followed.[5] In early 1999, Tropical Storm became the first commercially released Uber-Xena novel, which started a trend that led to more and more Uber-Xena print publications.[1] At some point there was talk about a Tropical Storm movie.[6] Nothing ever came of that, however, Cieran Llachlan Leavitt's uber novel Silent Legacy (Xena: Warrior Princess uber novel) (previously titled Tender is the Night and later published as Glass Houses), a story about the growing attraction between the lesbian director of a major Hollywood film and her deeply-in-denial lead actress, had the movie in the story actually be a film adaptation of Missy's Tropical Storm.

TS was translated into French, Spanish and German. A translated version was archived online at Bibliotheca, the German Xena archive[1], and the story was later published in shorter parts as a print novel series titled Sturm im Paradies.

A Dar and Kerry Fanlisting can be found here.