Buffy/Faith is a popular femslash pairing in the Buffy the Vampire Slayer fandom between slayers Buffy Summers and Faith. It is sometimes smooshed into 'Fuffy'.

With many fans headcanoning Faith as bisexual or a lesbian, and some fans feeling that the (romantic) relationship between the two approached canon, Faith's appearance on the show is credited with giving rise to an increase of femslash in Buffy fandom. The tumultuous canon relationship between the two gave fans plenty of material for angst and darkfic, as well as canon divergent AUs and missing scenes exploring alternate possibilities.

While Buffy/Faith was later eclipsed by the canon ship Willow/Tara, it remains a popular pairing and an iconic femslash ship from late 90s, early 00s fandom.

From The Shipper's Manifesto on LiveJournal:

Ask me to define my BtVS OTP, and intense is the first word that comes to mind. This is not a pairing for people who want to read about domestic bliss or soul mates. It's not, for the most part, a pairing that lends itself to sweetness. Buffy and Faith have a history together that's tumultuous and filled with enough angst, betrayal, violence, and missed opportunities to put a daytime soap opera to shame, but it's so much more than that. (vylit)[1]

Buffy and Faith dance together in The Bronze in Season 3, Episode 14, 'Bad Girls'. 'Bad Girls' was the subject of a number of canon divergence Buffy/Faith AUs in Buffy fandom.

After Faith is introduced in season 3, she and Buffy bond over being fellow slayers and - despite some initial tensions - develop a close friendship and are a strong dual-slayer team. However, their relationship later falls apart after Faith turns dark and betrays Buffy and her friends, which leads to Buffy putting her in a coma.

Things go from bad to worse worse when Faith bodyswaps with Buffy, has sex with her new boyfriend Riley, and later persuades Angel to choose her over Buffy. However, after Faith escapes prison, the two manage to work together to train potentials and fight the First Evil.

Despite their rocky canonical history there's plenty of evidence of attraction between Buffy and Faith, at least on Faith's side, while Buffy has prophetic dreams about Faith.

The SapphicSlayer archive credits Faith's debut on the show with catalysing an increase in the popularity of femslash in the fandom:

In the third season of the show, a character named Faith arrived on the scene and shook things up, both on the show and in the fandom. Faith's feelings towards Buffy, so ambiguous on the show, were made more concrete in fanfiction. Although there was Buffy femslash before the arrival of Faith(the Buffy/Willow shippers, Kate Bolin's "The Human Drama" series), Faith was undoubtedly the catalyst for the rise of Buffy femslash.[2]

Some fans felt the relationship between the two in canon approached textual,[3] and many, though not all, fans considered Faith to be bisexual or even lesbian. Until the canonical Willow/Tara relationship came along, Buffy/Faith was the most popular femslash ship on the show, and it remains the most popular femslash pairing for both Buffy & Faith.

Fanfiction spans the spectrum from fluffy PWP to darkfic, but most tends to the darker end.

Canon divergent AUs can also be episode related. In some works Faith's waking from a coma results in a reconciliation. In other works, Faith doesn't travel to LA after the bodyswap incident and instead both girls have to deal with angst or unintended side effects. Magic gone awry is a common trope in all Buffy pairings and in Fuffy fics, it can also result in time travel scenarios; sending a character back to relive season 3 with knowledge of what was going to happen.

Following Buffy's temporary death in season 5, many Fuffy shippers were disappointed that no one appeared to have told Faith. Many works set at this time, show Faith dealing with news of Buffy's death and sometimes taking on the Slayer duties in Sunnydale in her absence. Following Buffy's resurrection, the two often began a relationship.

Reconciliation fics are common in this pairing given their antagonistic relationship since mid season 3. In some works Faith returns to Sunnydale following her release from prison, to make amends or work with Buffy to defeat a new threat. In others, Buffy visits Faith while she is in prison. Buffy/Faith works set pre-season 7, often build on the idea that they are the only two Slayers alive and no one can truly understand them except each other. 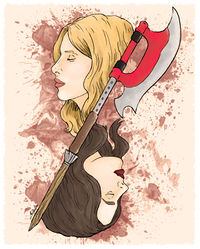 Post-Chosen works often show the two Slayers working closely together to train other Slayers and defeat a new big bad. While some post-canon works are fluffy looks at their developing relationship, there is also a lot of angst, as their both deal with the trauma of events from canon, and the season finale.

Works set during season 8 build heavily on spoilers from the comics. In some, Faith is recast as a more appropriate female love interest for Buffy; many Fuffy fans were disappointed when Buffy began a sexual relationship with a Slayer other than Faith in season 8. Very soon after Issue #12's publication, one Fuffy challenge provided fans with the Faith Finds Out prompt, where Faith discovers Buffy's relationship with another Slayer.[4]