You may be looking for Kung Fu: The Legend Continues. 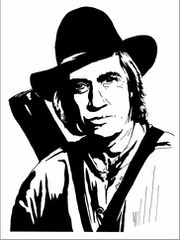 "Kung Fu follows the adventures of a Shaolin monk, Kwai Chang Caine (虔官昌 Qián Guānchāng)... who travels through the American Old West armed only with his spiritual training and his skill in martial arts, as he seeks his half-brother, Danny Caine. Keye Luke (as the blind Master Po) and Philip Ahn (as Master Kan) were also members of the regular cast." [1]

Kung Fu was advertised as "television's first Eastern western", because the pacifist hero did not carry a gun, relying on his skills at martial arts (specifically kung fu, the "way of the empty hand") to prevail in fights against bullies, railroad overseers, and others. These fight scenes tended to be filmed in extreme slow-motion, very unusual for television at the time. The overall cinematography of the series was beautiful, and its message of peace and harmony fit in well with the culture of the Seventies.

Caine was wandering the wild West trying to locate his half-brother. Their father had been an American merchant in China. When Caine's mother died, he was about eleven years old, and sat in front of Shaolin Temple for days before being admitted as a student. Caine also tended to flash back to his lessons with Master Po while encountering troubles in his American wanderings.

Following the end of the series, there was a television movie. Many years later, a spin-off series was created, Kung Fu: The Legend Continues which was set in then-modern day Toronto. Much of the fandom and fanfic are related to this semi-sequel.