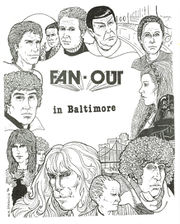 Fan-Out was a fan-run media con with a dealer's room, panels, a charity banquet, and celebrity guests of honor.

It was created by Marion McChesney, Victoria Clark and Barbara Storey who were partners in "Fan-Out, Inc."

At least four more "Fan-Outs" were proposed but they were canceled due to lack of interest. See below.

Who Was In Charge?

Fan-Out is brought to you by Marion McChesney, Victoria Clark and Barbara Storey. We would like to take this opportunity to thank our helpers for their time. Their help is greatly appreciated. There are too many people involved to list more than the key personnel.

Logistics and sound are brought to you by Conventional Magic, represented by George Laurence and John Vengroskie.

Art Show and Auction is run by Nancy Stasulis, assisted on the computer by Bonnie Davis and Steve Ellis. Nancy also provided all the artwork for the program book.

Video Room is brought to you by Mark Lee, assisted by Dwight Eaves.

Security is provided by Gus Liberto and Michael Elmore.

The Program Book and Programming

The program book is twenty pages long, and the front art is by Nancy Stasulis.

One of the guests of honor was Ritch Brinkley.

I've just returned from FAN-OUT in Hunt Valley, MD. This is becoming my favorite yearly con. It isn't wild and crazy but it is warm and comfortable—the perfect setting for meeting old friends and taking in new media. This year was even more exceptional—this con gets better all the time. A little bit of everything and the time to sample it all—what could be more relaxing?

I attended as a B&TB fan, meeting others from Michigan and West Virginia. The featured guests were Ritch Brinkley, Denise Crosby and William Campbell. Ritch is a sweet, lovable teddy-bear of a man. Listening to him spinning tales, I would have liked to take him home with me. He was a doll—gentle, patient and intelligent—the kind of guest star we need more of.

The B&TB panels (Open Discussion; The Movie—When & How; C&V—Which Is the More Unique Character?) were fun and thought-provoking. The Art Show display included numerous B&TB work, among others; all well-done and a plus for any wall lucky to have space. The video room featured three of my favorites—"Dead of Winter," "Arabesque," and "Brothers" and ... a midnight showing of Quest far Fire, starring our own RP. This was my first viewing of the film, and was it an experience! Lack of dialogue was adequately offset by the more interesting comments shouted by our fans. Best of all were the music videos—eleven outstanding selections shown twice by popular demand. Exquisitely done with the perfect pairing of music and scene—some of the music used was "Right Here Waiting," "Wings," "29th Sonnet," "Hungry Eyes" (!) and "Uptown Girl"—well, you get the picture. Wow!

B&TB merchandise was available from several dealers. I most enjoyed the beautiful art by Inez Brown and Lynette Combs. It made me proud to know that other fandoms have nothing on B&TB when it comes to talent. Of course, the best part of the con was getting together with old friends whom I hadn't seen since TunnelCon and making new ones. It was great passing the time with news, gossip and laughter. Too soon, it was time to say good-bye with our hugs and kisses speeding us on our separate ways—until the next Con. Kay, Lynette, Elaine, Vickie, Julie, Jean, Inez—I miss you already.[1]

This is the second year in a row I have attended the Fan-Out Convention in Baltimore, and I want to say something to everyone who wasn't able to attend; you were all there, with us, in spirit. Being a part of fandom, I guess we all know what it's like to correspond with other fans who live apart from us. Conventions are a great opportunity to reunite with friends, laugh and cry together, and generally, have a good time. This is what happened to many of us when we arrived in Baltimore. Most of my close friends are from Michigan, and it was so terrific to see them again, and to meet some ladies I've only corresponded with by phone or letters. And even though I only see most of these ladies once or twice a year, it didn't matter. We're family, and I think we always will be. This is what B&TB is all about: friendship, family, love, respect. These are the principles set forth by Catherine and Vincent. It didn't seem to matter thatwehaven'thadnewepisodesinoverayear. We still wanted to talk about the show, and what it had brought to all of us, in different ways, at different times, and how it deeply affected all of us. One of the highlights of the weekend was the appearance of one of the sweetest men ever to grace a stage, Ritch Brinkley. If you haven't seen Ritch in person, you are certainly missing a treat. He made us feel like a part of the tunnel world, especially when he walked on stage, complete in tunnel garb! Here is a man who graciously spent much time with us, relaying stories about his experience on B&TB, and his upcoming projects. He has a powerful presence, and his voice is rich and emotion-filled. His obvious love of B&TB was clearly evident, and he was a joy to meet. Thanks, Ritch, it's people like yourself that keep the Dream alive. Fan-Out was a good time for all, and that included the insightful panel discussions, the dealers'room, the costume contest, and two of my favorite events: the video room, where Friday night we all crowded in to see Quest for Fire and Saturday, to watch several absolutely wonderful music videos by Kim Taylor. Hurrah, Kim. We laughed and cried, and enjoyed every one of them.

I just wanted to share some of these thoughts with any of our B&BT friends who were unable to attend Baltimore. But you were truly in our thoughts. And for any of you out there who are worried about the B&TB fandom diminishing, please, don't worry yourself. From what I've seen on March 1, 2, or 3rd, Vincent and Catherine are alive ... and well. Our Dream lives on.[2]

There were at least four other Fan-Outs planned, but they did not take place.

A Fan-Out That Came Close to Happening: "A Midsummer's Night Dream"

The con in St. Louis, MO that was to take place June 28-20, 1991 at the King Henry VIII Hotel originally planned as a multi-media con with George Takei as a guest of honor. In the March 1991 issue of Tunneltalk, it was announced that this con was now planned as having a 100% Beauty and the Beast (TV) focus, and that its title was "A Midsummer's Night Dream.": ""On the good news side, the FAN-OUT convention in St.Louis this June 28–30 has been turned into an ALL B&TB con. Our guests are Jay Acovone, Armin Shimerman, Ritch Brinkley, Linda Campanelli, and M.M. Shelly Moore. Activities will include a banquet, acting seminar with Armin Shimerman and Ritch Brinkley, Friday night's special welcome reception, art auction, and an orphan zine table (where your zines can be sold even if you can't come to the con—but we'll miss you!)." 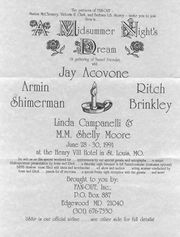 first side of the April 1991 flyer for the con planned for St. Louis 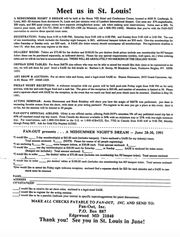 first side of the April 1991 flyer for the con planned for St. Louis

The next issue of Tunneltalk (April 1991) included an extensive flyer with this description: "Be with us on this special weekend for... appearances by our special guests, and autographs ... aunique Shakespearean presentation by Armin and Ritch ... a Saturday night banquet in full Tunnel-costume (costumes optional) ...B&TB dealers room filled with zines and merchandise...art show and auction...acting seminar conducted by Armin and Ritch ... panels for all interests ... a special Friday night reception with the guests ... and more!"

The guests of honor were to be Linda Campanelli, M.M. Shelly Moore, Jay Acovone, Armin Shimerman, and Ritch Brinkley.

The flyer described all of the events including "ACTING SEMINAR: Armin Shimerman and Ritch Brinkley will show you how the magic of B&TB was performed; join them in recreating favorite scenes from the show, with them as your acting partners! Pre-register to be sure you get a place at this event; there is no fee, but the seminar will be limited to 50 people." An orphan zine table: "ORPHAN ZINE TABLES: For those B&TB zine editors who may not be able to attend but would like their zines to be represented at the con, we will sell them for you!"

There were also comments in the April 1991 issue of Tunneltalk by one of the con's organizers, Barbara Storey, about an anonymous letter being circulated among fans, something that reflected the tensions regarding The Beauty and the Beast Wars and some fans refusal to attend, discuss, or congregate certain kinds of fans:

I have recently heard that an anonymous letter is allegedly being circulated (I have not seen this letter, nor actually heard of or from anyone who received it) which says, in effect, that Ron Perlman is not really going to appear at South of Oz, and that any true fan of B&TB would only attend our FAN-OUT convention in St. Louis. First of all, it has been confirmed that Ron will be at South of Oz, through his manager. There is no reason to doubt that. Secondly, I am of the opinion that an anonymous letter is one of the most cowardly acts possible, no matter what its intentions, and I would ask that—if this letter actually exists—if someone is doing this because they think they are helping me, they are not, and I would like them to stop. I have made my feelings about South of Oz quite clear, I think, and I will not be attending it. However, I still believe— as I always have—in freedom of speech and movement, and in the basic intelligence of fans in general. We each must make up our own minds about any issue in fandom, and neither coercion nor emotional manipulation of fellow fans is acceptable to me. I keep hoping that we will be able to move past this kind of nonsense someday, and learn to keep our "eyes on the prize... and less on each other."

There were comments by one of the organizers, Barbara, in the May 1991 issue of Tunneltalk:

I'm afraid I do have one piece of slghtly disappointing news. As many of you know, Vicky and I, and our partner Marion, have been planning a multi-media convention in St. Louis this summer, which we recently turned into an all-B&TB con. However—given the other B&TB and related events already scheduled for this summer (South of Oz and Ron's appearance in Chicago two weeks before it), not to mention MasqueCon this fall—we discovered that most people had already made their travel plans and were not able to respond to our con as they might have liked.

At the same time, we are very proud of the con we had planned, and felt that it offered fans a wonderful weekend, so . . . the only logical alternative seemed to move the convention to a new date, next year. So far as we know, there is only one other major B&TB con next summer (TUNNELCon 2), so hopefully people will not have to make a choice, but will be able to plan ahead for both if they want to, or decide far in advance which con they will attend. Right now, we are looking at August as the time for our con, and we are hoping to offer the exact same lineup and events as we had planned for this year, if Jay, Ritch, Armin, Linda, and Shelly are willing and available. As always, we will let you know details s here in TT as soon as we have them, and we hope that many of you will be there with us.