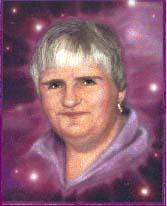 Marion McChesney was a writer, poet, zine publisher , and a con organizer.

She chaired the first ClipperCon conventions (1984-1989) and other actor guest cons including Shore Leave, Fan Out a mixed media convention (1990-1991) and later a multi-media slash convention, ConneXions.

Her first zine, Vault of Tomorrow, was a long running K&S friendship fanzine, the recipient of several awards, and according to Verba, "ever-popular."[1] Her B7 gen zine series, Powerplay 1 - 7, were beautifully illustrated, often "by her good friend Suzan Lovett, the lady who introduced her to B7."[2]. After Universal Translator stopped publishing, she and Sandy Zier edited an adzine called Communications Console. Later she fell hard for Man from Uncle, and started the MFU zine Classified Affairs and a multimedia zine called Awakenings under the name of Markate Press, at least partially because she'd just fallen hard for Wiseguy, and needed a place to publish her first Wiseguy story, "Story of My Life." (The final issue of Awakenings was published posthumously, and titled The Tribute Issue.) After her death, her zines were agented by In Person Press with the permission of Marion's family.

Other MFU fanzines she published:

Other Star Trek zines she published

In her (and Bev Volker's) honor, Farpoint Convention has started the Volker/McChesney Awards, given for individuals or groups who have served fandom over the years in important or unique ways. As part of their annual SIZZLER Awards, ConneXions also gave out a Marion McChesney Award, theirs for best new fanzine editor.