You may be looking for The Sacrifice, a Star Wars zine or The Small Sacrifices Affair, a MUNCLE zine. 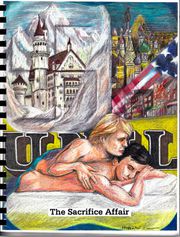 The Sacrifice Affair is a 176-page Man from UNCLE slash novel by Sarah Lindsay. The front cover is by Hindman, and it contains no interior art. It was edited by Jane Terry and Theresa Kyle.

It was nominated for a 2000 STIFfie Award for Best Man from UNCLE Novel and for its cover art.

From the publisher: "Illya and Napoleon both make unexpected sacrifices after an affair leaves Napoleon not quite himself. Along the way, Napoleon learns an important truth."

"He had already gone home and packed upon being released from the infirmary that morning in anticipation of setting out on Napoleon's trail. So he was essentially ready to leave; he would just be going without permission instead. Kuryakin loaded the gear into his car, dividing the material judiciously between his suitcase and knapsack before driving to the bank and cleaning out his account. Back at the office, no one would notice his absence until it was too late to stop him; he had signed out on sick leave so he wouldn't be expected to check in for a couple of days.

Ilya was on the next plane to Munich. Trained to sleep anywhere, he napped throughout most of the long flight. It might be a long while before he would be able to sleep again."

As a slash novel, The Sacrifice Affair is a cracking good action story, and as an action story, Sarah Lindsay rings a new change on the how-they-became-lovers motif: mistaken orientation. Napoleon thinks that Illya is gay and secretly in love with him, so out of appreciation he takes the Russian to bed and makes love to him. Illya, who really is not so inclined, nevertheless submits to please his partner. But this is only part of the characterization of the men, which is strong and thoughtfully rendered throughout.

Napoleon and Illya are more usually occupied shimmying up precarious tower walls or down swaying ropes over the pressure-sensitive alarm, or faking out the enemy in elaborate ploys, as each finds it necessary to rescue his partner from totalitarian encampments, and escape across national borders, all unaided.

Lindsay's writing is crisp and visual in these sequences, and creates some truly thrilling moments, as, for example, Napoleon in his prison cell fully comprehending, from the brush heaped high around the stake in the courtyard, that in a few days he will he burned alive.

Good reading is a result of good writing. It may seem like faint praise, but some of the finest things about Lindsay's style are that she can spell and construct clean, complete sentences. There is nothing to impede the story, to make the reader say, wait a minute, what docs she mean here?

Though the novel slows down quite a lot in parts, in general it is a story that works on both the public and private levels, showing us both the agents, and the men, from U.N.C.L.E. Nice cover by [Hindman], too. 1 liked how she blended the flag into the cityscape with nothing but pastel chalk. [2]