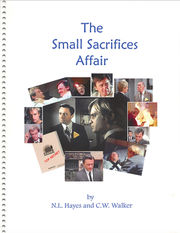 The Small Sacrifices Affair is a gen 130-page novel by N.L. Hayes and C.W. Walker. It was a winner of a 2004 FanQ. Reviews of the zine and an excerpt are archived here.

Summary: What would be the psychological fallout of taking Capsule B? Can UNCLE agents be prepared for them?

Author's Notes for the Zine: Explanation

NANCY: Everything in life is just a story idea, waiting to be explored and developed — at least to writers. Sometimes it's an image, sometimes a character; in the case of the story you're about to read, it was a question of connecting the dots, and finding a dot or two missing to complete the picture. In a late night Channel_W thread about the origins of stories, Kate Drummond recalled waking up with such a severe case of jet lag that she couldn't remember where she was. Since, like most people, I've had that experience but never been inspired to write about it, I asked why it had been so disturbing. The answer: how long it had lasted and the sense that it might never end. The next post to arrive said simply:

And I thought. Does U.N.C.L.E. prepare its agents for the psychological fallout of taking Capsule B? Can they prepare them? I knew it was a story I wanted to write, and I envisioned it as primarily a dialogue between Solo and Kuryakin. It seemed the perfect vehicle for a team-written story — something I'd never tried. But I knew someone with a lot of experience with that, and she just happened to be the Solo needed by my Kuryakin. I sent her an invitation to play.

CINDY: Nancy called me on a Sunday afternoon and told me her idea. It had such great potential as a story; I could see the possibilities immediately. And there was another reason I was intrigued. Nancy and I eat lunch together at Rutgers on a regular basis. We have different personalities and different orientations, to life — in some ways, Nancy and I are Napoleon and Illya — and often our conversations sound like something that might go on between the agents in the U.N.C.L.E. commissary. We began to notice this and often laughed about it. So, what might it be like to actually climb into their skins and do it 'for real'?

Now, I've written the Escape/MFU series with Nan Mack, but in that one, I always write both Solo and Kuryakin. I wondered what it might feel like to actually play against a different Kuryakin — one that was close to my own concept but not under my control. And of all the Illyas I've read in fanfiction (including my own), IMO, Nancy's is closest to what an authentic Illya might actually be like.

NANCY: Honestly — who could pass up a role playing opportunity like that? We came to a basic agreement about the timeline that would allow a seamless intersection between our two universes; then we jumped in, Cindy, like her alter ego, being patient as I got a feel for the process. The result is a story neither of us would have written alone, could have written alone, because it's a hybrid between creating a story and living a story. The characters made decisions, spoke, acted and — more importantly — reacted in 'real time,' as much as possible; sometimes they later changed their minds, even wished they could revise what they said or how they said it. As in life, there were misinterpretations and miscues, and sometimes we followed those to places we might otherwise never have gone. It isn't always pretty, but it has a level of realism that was addictive and thrilling to write. Hopefully, as readers, you'll feel it, too.

CINDY: Not only was this fun to write, but it was certainly an interesting learning experience. Not only did we explore facets of Solo and Kuryakin's personalities in a way that wouldn't be possible for a single author, but as complications arose, we were forced to think through and flesh out more of the U.N.C.L.E. organization as well. It was also a way to experience what it might be like to be an agent, particularly operating in survival mode as Solo does through most of this story. Finally, what happens raises complex and important questions about the moral and ethical compromises that agents — and perhaps, all of us — must deal with every day. As Waverly says at one point, field agents are retired at forty not because of what they might do in the field, but because of what the field does to them. In their profession, as in this story, no one survives unscathed. So welcome to our view of U.N.C.L.E. — up close and personal.