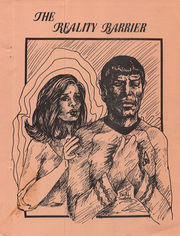 Dedication: "To Leonard Nimoy, in gratitude for creating a Spock that we could spin such fantasies from."

After Peg Kennedy took over Bill Hupe fanzine distribution business, Marion McChesney allowed the new company to distribute the zine. That ended in June 1997 when the reprint rights for all of Marion's zines were withdrawn from New Leaf Productions.

Her [Marion McChesney] regular Star Trek anthology story collections were pretty much Hurt/Comfort gen. But her VoT Special Editions were not only adult, but either overtly or ultimately MARY SUEs. There is nothing ultimate about the Mary Sue in this novel. She is a Star Trek fan of the time who comes across Mr. Spock by the side of the road while driving about her day. It doesn't get much more Mary Sue than this!!! [1]