Whisper of the Wind 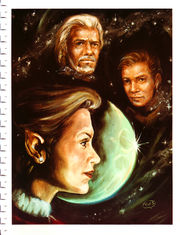 Whisper of the Wind is a het Star Trek: TOS novel by Betsy Fisher. The art is by TACS and it was edited by Marion McChesney.

It was published as a "Vault of Tomorrow Special Edition."

The 1994 edition has 98 pages. Regarding the 1994 edition, one agented by Bill Hupe: "Betsy Fisher's classic Kirk novel is being reprinted in 1992, completely re-typeset and re-illustrated." [1]

A love story written within a love story, beginning with the admission of young Starr Gresham to Starfleet Academy with a passionate case of hero worship of the 'late, great' James T. Kirk. Prepared to earn her own way through the difficult six-year program, the youngster applies for and lands a part-time job on the shipping docks of the academy where she meets and immediately develops a crush on an enigmatic older man known only as "Skipper". She cannot figure out what it is about him that draws her to him like a magnet.

As her academic year rolls into high gear, Gresham gradually learns about the OTHER love story: The undeniable love between Captain James Kirk and Spock, his logical Vulcan first officer, their mutal [sic] affection for Dr. Leonard McCoy, and the tragedy which was responsible for the deaths of all three.

Suddenly the whole truth begins to unravel, something which Skipper has purposely withheld from Starr.

Find out what happens when Skipper is finally forced to reveal the whole truth, including his own inevitable fate.

If you enjoy a love story, this zine gives you two for the price of one.

After Peg Kennedy took over Bill Hupe fanzine distribution business, Marion McChesney allowed the new company to distribute the zine. That ended in June 1997 when the reprint rights for all of Marion's zines were withdrawn from New Leaf Productions.