Similar gatherings, but without food and frivolity, are Dead Dog Panels and Convention Business Meetings. The distinction between a Dead Dog Panel and Dead Dog Party is sometimes blurred especially when the speaker/writer only refers to "The Dead Dog". 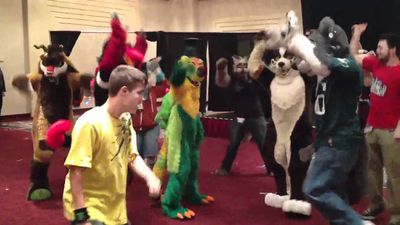 Sunday - Dead Dog Party (Convention Suite) For those who stay until the last dog is hanged and even for the funeral. - Westercon 2 (1969) Schedule

But the best part of the entire weekend was the "dead dog party," held for all the con workers, and including all remaining guests. This function begins after the con has ofﬁcially closed, and gains its name from the fact that the physical condition of the workers most closely resembles that of the aforementioned deceased canine. This is the time the workers have the guests to themselves, and in many larger cons it is often the ONLY opportunity they get to talk with the guests. It is a time for reliving the good times and trying to ignore the bad, for good-byes to seldom-seen friends, and for a last exchange of mementoes. For me, the most treasured of these is a photocopy of a drawing I did of George, which he signed "To Vel, who talent, strength, faith and tenacity have brought us to this point - George Takei." THAT is what makes bells chime!" - Convention review posted in TREKISM#12, talking about ConvAdven Florida Space Fest Tampa 1980

Blake's Wake is our "dead dog" party; that end of the con event that's usually for the convention workers only. Well, ORAC held a "Dead Travis" party with the whole convention invited and we had a great time, so we thought we'd do the same thing (monkey see, monkey do). The winners of all our games will be announced during this event. Food and drink will be served at no extra charge, and for your viewing pleasure, Blake's 7 and other music videos will be screened. This event starts at 5pm on the Flight Deck. 1989 Revelcon Program Guide