Westercon is a general science fiction and fantasy convention held in western North America, usually on or around the U.S. Independence Day. 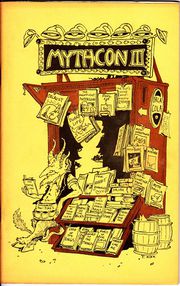 I am sorry to say that from all of our reporters who attended Westercon we received the same sort of comment - "a bummer." Perhaps we have been too spoiled by the competent and interesting programming of other science fiction conventions to appreciate a convention oriented more towards science fantasy with just a little science fiction thrown in, unlike some other fiction conventions where every minute there are two or three events happening and it is a major decision which one to attend, Westercon had people sitting in the lobby waiting for something to happen. The costume competition was not very well organized. At a Westercon held in San Francisco a couple of years ago at the St. Francis Hotel there were about 50 entrants and they were not seen before coming on stage. At the Oakland convention you saw all of the entrants before they got on stage and after seeing the first two or three that were of any interest — much of the audience just up and left — except for those who wanted to stick around just to see the nude girl in the black chiffon cover, which didn't cover anything. The best costumes were worn by David Gerrold and D.C. Fontana. Gerrold wore an ornate blue and silver costume somewhat reminiscent of that worn by men in the Renaissance. D.C. wore a flowing and very feminine toga-like garment. Fran Evans, a Los Angeles artist and costume designer created their makeup which consisted of coppery skintones with handpainted green designs (there was a disagreement as to whether they were leaves or veins) Also, both had lights placed in front of their eyes which gave an effect similar to the Morlocks in the movie THE TIME MACHINE. Another interesting costume was worn by Kathy Bushman. It was a beautiful gold lame dress and to match it she wore a gold headdress, face mask and was carrying a golden whip. Most of the other costumes lacked imagination and creativity. The sad part was that when the awards were given out-there were seven plaques, all the same, to each contestant. The costumes worn by David, Dorothy and Kathy were given no special award for their obvious superiority over the other "winners".

The art show was very crowded and badly illuminated, making it more of a hassle than an enjoyable exhibition to attend.

Finally, I feel the Lemington Hotel was far too small to hold a convention of this type. Hopefully the next one will be better. [1]

Several years ago, I was attending the Ricky's Palo Alto Westercon, which was distinguished by the fact that (a) it wasn't at Ricky's, but at the Sheraton Palance, and (b) it wasn't in Palo Alto, but in San Francisco. The convention was also distinguished by many things, not the least of which was the fey night manager and his two dogs. The Palace, like other convention hotels, had inadequate elevator service, with elderly elevators which used pneumatic seals to "sense" the presence of someone in the doors.

During the course of the convention, I started towards the elevators at one point, and witnessed several people (including a mixture of fans and Japanese and German tourists) all trying to get into one of the lobby elevators at the same time. Apparently there were about 17 people in the elevator, including one German woman who was about 8.5 months pregnant. Some of the Germans, but few of the Japanese, spoke English. The last four people to get on were Walter Breen, Marion Zimmer Bradley, and two of their friends, one known as "Spinstar" and a "Bishop Mikael," [2] [3]the latter in costume which my feeble memory says included a sword. The good Bishop was insisting that there was plenty of room for more people, and forceably held open the door until everyone was on.

Since there was still a crowd in the lobby, and no other elevators seemed eminent, I decided that it would be easier to take the stairs, and did so.

Some time later, I was walking down from the ninth floor and heard a strange sound about the sixth floor, and went out to check. It appeared to be coming from the elevator shafts, and further exploration suggested it was an elevator stuck between the fifth and sixth floor. I continued walking down to the lobby, and reported the stuck elevator, and a very harassed gentleman behind the information desk thanked me. "We've got phones in the elevators," he said, "and there's someone on the elevator who seems pretty reasonable." (Later evidence suggested this was Walter Breen, who was trying to give us much information as possible.) "But every time we get connected to him, some Japanese guy apparently grabs the phone, shouts 'Room Numbah!' at me, and hangs up when I try to talk with him." So I told him where the elevator -seemed- to be, and went off to do other fannish things.

This story is rife with coincidences, because when I got back to the lobby a few minutes later, the elevator had just been brought down to the first floor, and the people got out, looking shaken and harried, but otherwise okay. Mikael flung his cape around his shoulders, declared he'd never been so discommoded, and demanded champagne. The night manager, who seemed to take an instant dislike to him, basically said he could have orange juice and like it.

Another coincidence: at that point, Debbie Notkin had kindly let me stay in the place she and Tom Whitmore shared while she was at the convention, so that night I took the bus home to Berkeley, a bus I shared with Breen and Bradley. They seemed okay, and Walter had recovered enough to talk about the experience with a certain amount of good humor, although Marion was quiet and obviously still somewhat upset. Walter told me that the elevator had been made even -smaller- because during the entire hour plus that they'd spend trapped inside, one of the Germans had maneuvered his pregnant wife into a corner and stood with his back to everyone else and arms braced against the sides of the elevator, giving her room to be as comfortable as possible under the circumstances.

We flash forward a few years, to the final coincidence. I've started working at a law firm in San Francisco, and one of the attorneys stopped me in the hall. "Loren, you like science fiction," he said. "Do you know anything about a sci fi convention that was held a few years back at the Sheraton Palace?"

"Do you know anything about people getting stuck in an elevator?"

"Walter and Marion? Yeah -- I was the one who told the front desk where they were. I rode home on the bus with them that night, too."

"Well, Marion Bradley has sued the Sheraton for emotional distress. She claims she had a heart attack in the elevator, and the experience was so devastating that she was late on a contract for the first time in her life, which harmed her professional reputation."

So -I- got deposed, and the case eventually settled out of court. As it turned out, the lawsuit had not been Marion's idea, or Walter's, but that of their two companions, who dropped out of the suit as soon as it had been filed, and refused to be deposed. It looked to me as though, once they realized what serious trouble they could get into, they scurried for cover, and left MZB dangling in the wind. But Walter, who was incredibly gregarious, just found the experience of being deposed to be delightful -- here were people -asking him questions,- and writing down everything he said. He turned on the charm, and had a wonderful time. [4]

Well, I'm a con-going novice. My experience is limited to 'Bimbos of the Death Sun', and con reviews in Locus. So maybe what I saw at Westercon is normal these days.

One masquerade act was two guys from the USS Raging Queen, dressed in ST:TNG uniforms - in pink and fuchia. One had pointed ears, and was called Spock, and he called his companion Captain. They didn't lisp, or droop fingers. Their sketch was hilarious, and they called themselves gay. The Captain threw the Vulcan over his knee in a passionate kiss, and they ended the sketch with a condom and admonition: 'use this to live long and prosper'. The audience loved it, and was mostly on its feet cheering by the end.

Later, Greg Bear (the EmC) was struggling to fill time, and he asked the audience what K/S for Klingons was called, and asked if anyone had read or written anything with Worf, for example. When someone up front asked what K/S was, he replied, "And you call yourself a fan, and you don't know about K/S? Well, Kirk and Spock are an item," or words to that effect. He was going for a laugh here, but after all the stories about homophobic SF fans, much less homophobic media fans ("Why do they hate ST so much?") I was surprised to hear it mentioned aloud. On the one hand, being a subject for ridicule is not better than a subject for condemnation, but being a subject at all seems to me to be interesting.

And [ Rachel Sabotini ] was telling me that the presence of media fanzines in the dealers room (for sale, and as a library for browsing) was new. All due to a fuss she kicked up at Norwescon. Good job, [Rachel Sabotini]! I also saw, for sale, on a zine pile at a table with various media items, a K/S zine. It said K/S on the cover. [Rachel Sabotini] found several in a box at the zine tables, too, (well, those folks worked on Virgule).

So are gay skits common at masquerades at "mainstream" SF cons? [5]