Bellerophon is the Star Trek: TOS newsletter for the Star Klique, a Star Trek club based in Daly City, California.

The newsletter contains news, trivia, poetry, and reviews. Starting with issues 18-20, the fanzine became "a showcase for sf & fantasy talent" and averaged 40 pages.

Star Klique, as some of you may know, puts out a combination sf and fantasy zine. Issue 20 is now for sale, 21 is almost finished, and 22 is just beginning. Anyone interested in contributing art or short fiction to the zine (Bellerophon) is heartily encouraged to do so. Media stories are accepted, adult is ok (sorry, no slash), and non-media stories are welcomed with open arms. [1]

The title of the zine: Bellerophon (/bəˈlɛrəfən/; Greek: Βελλεροφῶν) or Bellerophontes (Βελλεροφόντης) is a hero of Greek mythology. He was the greatest hero and slayer of monsters, alongside Cadmus and Perseus, whose greatest feat was killing the Chimera.

From the first issue: "BUT, THIS HAS NOTHING TO DO WITH OUR CHOSING [sic] THE NAME 'BELLEROPHON' FOR OUR PUBLICATION -- WE JUST LIKE THE WAY THE NAME SOUNDED AND LOOKED!!!!!!!"

Like some newsletters of that era, earlier issues were published without the required pre-1989 copyright notices, possibly placing the fanzine in the public domain.

Alex, one of the contributor's to this zine, has his or her last name spelled at least three different ways: Hochstrasser, Hochstraser, and Hockstraser.

What you are reading at this moment is our introductory issue of BELLEROPHON, a bimonthly publication of STAR KLIQUE formed in April 1975 by 15 Star Trek and science fiction aficionados. We had worked on a newszine before and felt we would like to have one published by our newly donned organization. Why the name BELLEROPHON? Purely for visual and pronouncing merits of the word. It is interesting to note that the first 5 letters BELE ( Which is F, fr. fem of beau beautiful) and that the last 4 letters PHON (which means sound: voice: speech). Everyone in STAR KLIQUE works on BELLEROPHON in some way, whether it be writing, drawing, typing, etc., and it is our hope that our new publication will be of interest to everyone. We welcome submissions for BELLEROPHON, but of course there is no payment, as our aim is just to break even on the expenses of having BELLEROPHON printed and mailed. Our next issue will be mailed out at the end of August. Six issues will be $3.00, or $.50 per copy. We are enclosing with this issue a BELLEROPHON subscription order.

WHAT KIND OF A CLUB IS STAR KLIQUE? We are basically a social organization although we plan to begin some charitable work in August. What we do is attend lectures, movies, exhibits, and have rotating meetings and gatherings at each other's homes on a regular basis. If you are in the Bay Area and would like further information regarding STAR KLIQUE, please send a self-addressed stamped envelope.

Bellerophon v.1 n.1 was published in June 1975 and contains 11 pages. The front cover is by Sharon Stone, the back cover is a montage of photos taken at Equicon/FilmCon.

Bellerophon v.1 n.2 was published in August 1975 and contains 15 pages. The cover is by Karin Giblin. The interior illos are by Karin Giblin and Judith Aho. 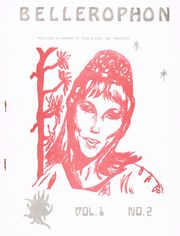 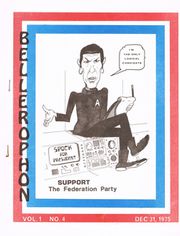 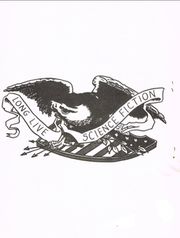 back cover of v.1 n.4, Larry Telles; this is the first issue with an illo on the back cover.

Bellerophon v.1 n.4 was published in December 1975 and contains 16 pages. Interior illos are by Sandy Stone, Karin Giblin, and lettering by Alex Hockstraser. 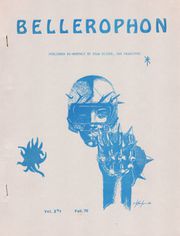 front cover of v.2 n.1, Alex Hochstraser (spelled differently in this issue than in the previous one)

The art is by Alex Hochstraser (spelled differently in this issue than in the previous one), Karin Giblin, and Sandy Stone.

News, reviews, short fiction, trivia games, art -- BELLEROPHON has it all. It's a vital, alive fanzine. Featuring, in this issue, an interview with Bruce Hyde (Kevin Reilly) who has only very recently been introduced to the incredible world of Star Trek fandom. Also there is poetry, a large ST crossword, a Rollerball review, and a short story by Katherine Gates Hunkle that reads well. This is the best issue yet, and it's getting better. Layout still needs work, and art is plentiful but not quite what it could be. However, it is above average for a zine of its type and frequency. Plus it comes out often and regularly - two points in its favor.[2] 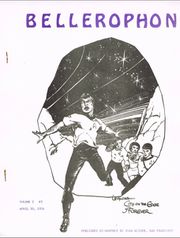 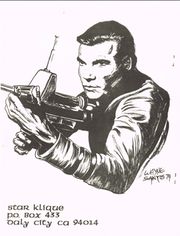 Bellerophon is a frequent small fanzine, a little sparse on the news side, but always containing a wide variety of offerings. For example, this issue contains: a one-page Equicon report with an accompanying page of photos in a montage; an article by B. Larry Fawn; some poetry; a review of Leonard Nimoy's "Sherlock Holmes"; a massive Star Trek word hunt; a 4-page short story by Stephen H. Lampen; another longer short Star Trek story by Don Dailey; and some news items. Plus a really lovely cover illustration by a premier comic artist. Steve Leialoha, which I suspect was bought at the Equicon art auction. (Right, Judy?) [3] 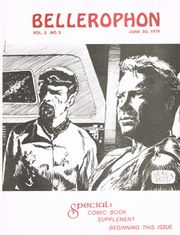 This issue has been scanned here. 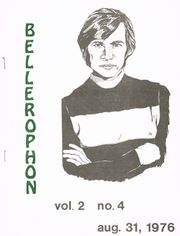 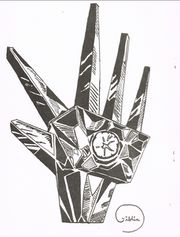 The art is by Sandy Stone, Alka 2, and Karin Giblin. 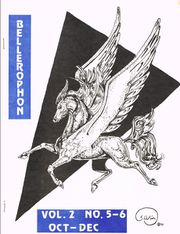 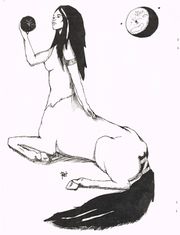 We apologize for this issue being so late. Our convention which was held in December sort of took the wind out of our sails as far as creating Bellerophon went. We have tried to put as much into this issue as possible -- hopefully you will not be disappointed.

The February issue is already in the works and will be available (barring any problems arising) the first week of March. Thank you for your support of our fanzine. We appreciate all of the kind words (and criticism). Please feel free to tell us what you would like to see in Bellerophon and we will try to accommodate the requests.

Bellerophon v.2 n.7 was published in 1977 (month not specified; the submission deadline for the next issue is April) and contains 37 pages.

The art is by Karin Giblin, Pet, Anita Stone, and William Bow. The editor writes: "This is beginning to look like a Giblin Special -- aren't there any other artists out there who would like to contribute to Bellerophon!" 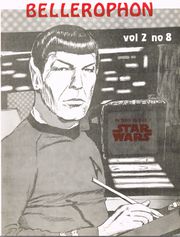 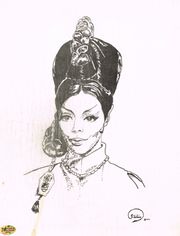 I am rather disappointed with this issue of Bellerophon. Writing is fair, sometimes even bad. It was advertised on the cover that there was Star Wars material, and all there was of that were four poorly reduced pictures. There was a somewhat inter esting article on the possibility of spacial war between the US and USSR, but there was little else of note. A full page crossword puzzle took up more room than it warranted: two full pages of clues! The comic strip that usually appeared in the zine was missing, and quite frankly, the only redeeming quality of this particular issue is in: l) Karen Giblin's art, and 2) the "Bits and Pieces" column. Other than that, I really don't know, I have seen better issues put out by Star Klique, so I assume that this issue was just one of the duds that occasionally come out of fandom when all is not well. LAYOUT: 3 CONTENT: 2 OVERALL RATING: 5 [4] 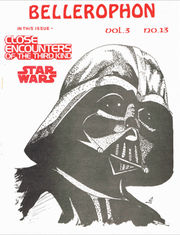 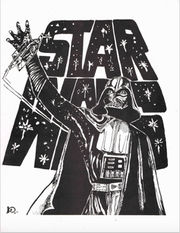 back cover of issue #13, Karin Gilbin

The art is by Karin Giblin, Bill Bow, Sandy Stone, and Alka.

said the button, and I felt a coldness, Stamp Out Star Trek - why? Because of Star Wars? How can you compare the two? Star Trek was a successful television series - with limitations not only technically but limited because of the medium and network pressures. i*m sure if you took Gene Roddenberry to a screening of star wars and asked him to list the things you are seeing on the screen he wanted to do but coulo not because of network pressures or money limitations the list would be very impressive.

Let's re-examine Star Trek. How many of you have benefitted from Star Trek? I don't mean monetarily - although that has been done too. I mean, how many friends do you have that you never would have met? How many of you started to write, draw, design, etc, just because of Star Trek? How many of you came out of your shells and met people who were like you, and you felt like you belonged? Not like before when people thought you were different. Now there was some way you could really communicate with other people on a mutual plane.

Another button says "Star Trek Wars" with the Trek crossed out. Why can't there be room for both of them. Granted - Star Warsis an exceptional film. It is already a classic and will be remembered and reshown for years to come. It has set a precedent for other science fiction films yet to be made. But where is the character development and interplay that was possible on Star Trek. So far it does NOT EXIST. It will in future movies. But right now that is the one thing the movie lacks that Star Trek had.

We have been teased by the Gods many times about THE STAR TREK MOVIE. At last it seemed like a reality and then once again we were fooled-no movie -now a series would be in the offering. If Paramount had been quicker on the draw, they would have had the impact with the Star Trek movie that went to Star Wars. Star Wars is a tough act to follow - apparently someone at Paramount decided to at least get the corner on the television market with a proven product. too bad - "what might have been". Now there are rumors that the series will never take place and if it does, will not have the original stars it is obvious that many of us feel "Don't talk to me about it anymore until it is something real and concrete and i can see with my own eyes!"

Perhaps the Enterprise will not fly again. Perhaps it is a blessing. I don't t know. My desire to see new voyages of the Enterprise is tempered with my fear of a sloppy shadow of the original.

So, enjoy Star Wars, you should - it' a wonderful film. But, if we are going to Stamp Out Star Trek, then maybe we should stamp out Forbidden Planet or The Day the Earth Stood Still; because they can't measure up to the technology of Star Wars. 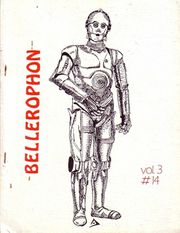 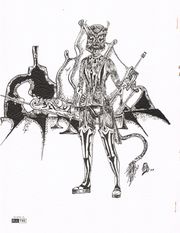 Bellerophon v.3 n.3 was published is undated, but published in 1978, and contains 30 pages. The art is by Karin Gilbin. This issue was edited by Judy Aho. 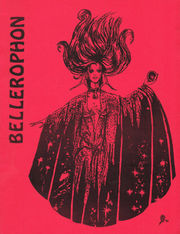 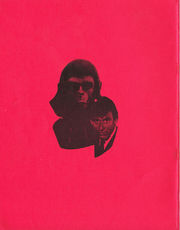 back cover of issue #15, Planet of the Apes 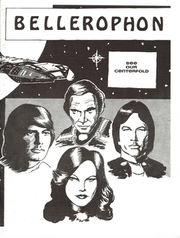 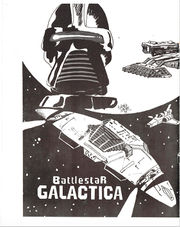 back cover of issue #16, Wayne Santos

Welcome to Volume 3 #16 of Bellerophon. Witn this issue, we are drastically changing not only the "look" of the magazine, but the content as well. In the days before the prozines, such as Starlog, fanzines attempted to bring news to the fans about upcoming films, reviews, interviews, etc. Now, however, it is no longer possible for us to compete with a monthly publication. By the time our fanzine arrives at your door, some of our news is already stale.

However, the demand for fan-oriented fiction continues. Our goal is to bring as much fiction to you as possible, illustrated by fan artwork. We encourage authors to give us an idea of what kind of illustrations they want to go with their stories. We would like to run one main piece of artwork along with small illustrations accompanying each story. Of course, we are also still interested in individual pieces of fan artwork as well.

Starting with this issue, we will be publishing Bellerophon on a quarterly schedule. This will allow us to produce a larger, higher quality 'zine containing longer stories and more artwork. In the next issue we'll be letting you know the revised subscription rates.

Bellerophon 17 was published in January 1980 and contains 34 pages. It was edited by Judy and Steve Schenkofsky. 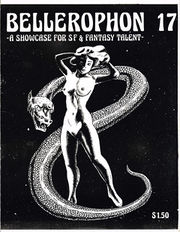 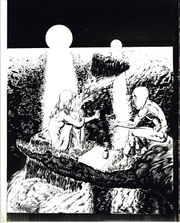 Bellerophon 18 was published in February 1981 and contains 51 pages. It was edited by Steve Schenkofsky and Judy Schenkofsky. 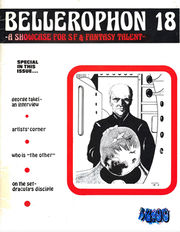 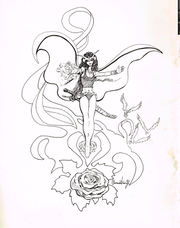 The Circle, poem by Donald Kerns (inside front cover)

Bellerophon 19 was published in February 1982 and contains 79 pages. 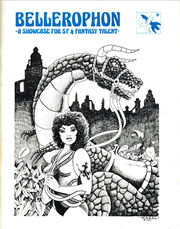