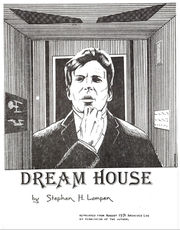 illo by Al de la Rosa from Bellerophon #17, portrays William Shatner in the elevator on the Enterprise

In the fic, Shatner, Doohan, and Kelley appear. While Nimoy is mentioned, he is not present.

In the story, Shatner, Doohan and Kelley are involved in tense negotiations over whether to appear in the new Star Trek movie. They wake up on the Starship Enterprise in the year 2241. After encountering a Klingon battle cruiser, the terrified actors are more than willing to accept the roles.

"Bzzzzzt. Plip. Hello? Hello? Mr. Roddenberry. Yes...yes. Everything's just tine. Oh, it worked perfectly. You want...what's that? They all told you they weren't going to renew their contracts? Oh, well, just don't you worry yourself about that. They'll be there all right. How do I know? Just take my word for it. Now, when would you like them there? Monday? Fine..."