When Star Wars came to town, Star Trek fans realized that they were no longer the only large-scale media fandom.

The Star Wars fandom enticed many fans away from the Star Trek fandom, something that often created bad feelings between the two.

Ironically, many of the same issues Star Trek fans faced in their relations with traditional science fiction fans were reflected with these "new" fans. See Science Fiction Fandom vs. Media Fandom.

Star Wars was just the beginning of the increased fannish buffet of shows; this filk from The IDICon Song Book in 1985 illustrates Trek fans' realization that they weren't the only show in town anymore. Click on image to enlarge.

In September 1977, a Star Trek fan wrote about Star Wars and Star Trek:

Not all of Star Trek fandom has reacted favorably to Star wars however. Two extremes have already formed, one saying that 'Trek is Dead.' citing Star Wars as its killer; and the other faction maintains a grin-and-bear it attitude, assuming that the enthusiasm will eventually wane, leaving ST fandom intact, and that Star Wars 'is just another rerun movie.' Actually, both groups in those extremes are in a few disappointments. For the people that maintain Trek is dead, there are still those die-hard Trek fen who consider ST the ultimate show of all time. Those types of fans will always hold on to whatever they see in Star Trek to the exclusion of what any competition may offer. Some people are also just too hooked on ST fandom to ever give it up for something else, and others may stay with ST fandom simply to avoid the effort and hassles of 'making it' in another fandom. [1] 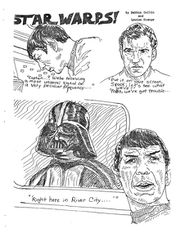 inside the Leonard Nimoy Association of Fans Yearbook (1978), Star Warps by Debbie Collin and Louise Stange -- "Folks, we've got trouble right here in River City" (a play on words regarding James Kirk's hometown, Riverside, Iowa, and "The Music Man")

The Effect of Star Wars on Star Trek Fandom

from The Sehlat's Roar #5, Gordon Carleton,

"What do you mean you're all standing in line to see 'Star Wars'?! That's mutiny, mister!"

The Star Wars fandom enticed many fans away from the Star Trek fandom, something that often created bad feelings between the two.

In October 1977, the Star Trek Welcommittee printed a prominent warning to fans who may be interested in writing Star Wars (which had just been released a few months earlier) fiction. This warning doesn't appear to have any basis in example, something the notice mentions. It may be an attempt to keep fans within the Star Trek fandom and an example of the early tensions between the fandoms. It may be a brag by ST fans, pointing out that Roddenberry had been a benign PTB. Or it may have been much more a friendly warning, one with no hidden motives. The text of the warning:

IMPORTANT! Please take note: If you are a zine editor, writer, etc., who is planning to publish/contribute to a fanzine based on STAR WARS...be advised 20th Century Fox may not be quite as understanding as Paramount has been for years about Star Trek. YOU ARE IN VIOLATION OF BOTH 20th CENTURY FOX'S & BALLANTINE BOOKS' EXCLUSIVE LITERARY RIGHTS IF YOU ARE PUBLISHING STAR WARS FICTION. BOTH of these prestigious corporations/companies have the legal right to SUE TO THE FULL EXTENT OF THE LAW anyone publishing SW-based fan fiction (or spin-off fiction). As APOTA has been informed., there have been no known cases of Ballantine taking such action, but do you want to be their test case? [2]

For some fans, the change in fannish interests was due to what they perceived of as a lack fresh ideas and boredom. A fan writes in the Star Wars letterzine Jundland Wastes #2:

Many of us are 'graduates' of ST fandom, and it seemed to me that after a while every other ST story was about 'Kirk dies and Spock goes off his logical rocker,' or 'Spock dies and Kirk just can't bear to live anymore,'... continual variations on one very narrow theme. The 'overkill' on this kind of relationship story (I'm talking here about the friendship relationship, not K/S) got to be 'way too much... One reason I left ST for SW was because SW themes were fresh, not the same old relationship hash.

By next year, at the very least, a new fandom will spring into existence: Star Wars fandom. But why a whole fandom for just one movie? Why so much excitement just for two hours of fantasy on film?... The mundane reviewers suggest that people are tired of all the disaster films, the film jammed with social commentary, heavy symbolism and heavy meanings. Or maybe there hasn't been a big escapism film in a long time, and Star Wars luckily cased in by appearing at just the right time? Or maybe the special effects just swept everyone up in an identical wave of enthusiasm? Yet, not only has the mundane public turned out in record numbers to see Star Wars. Fandom has gone all out, too, and not Star Trek fandom either. All of the SF-related fandoms are talking about Star Wars: comix fandom, Sword & Sorcery, even Tolkien... Just to look at Star Trek fandom in particular, the popularity can be traced to the fact that Paramount has stalled far too long in bringing out the new series. Star Trek fandom was ripe for Star Wars to find a willing audience. Another thing about Star Wars is the scope of the film. There is an epic quality to Star Wars... It's a grand tale full of adventure and suspense... Star Trek never had that epic quality. The whole of ST might have, but you might have to think a while before you could grasp it all. Star Wars shows that epic tale in the space of two hours, so that you don't have time to lose a single instant of it... A Star Wars fandom seems almost destined. Zine should appear shortly and one can only wonder when the first Star Wars convention will be. As in the case of ST fandom in the late '60's and early '70's, it will probably be a case of Star Wars appearing as part of the programming in regular ST, SF and Comicons, until a large enough cult exists to hold separate Star Wars cons... Many of them have already instituted SW panels, and Star Wars characters now swamp the costume competitions with a multitude of Lukes, Solos, and Wookies [3][4]

There were a number of con panels at Media West*Con in the early 1980s that addressed fans' divided loyalties. One example was the 1982 panel titled: "Fan Wars or the ST-SW 'Feud.'"

In a flyer for Combining Forces, a Star Wars zine, the editors promised a certain context: "In the continuing search for our roots, we'll have a Star Trek story or two, by our resident Trekophiles..."

Fans Debate the Differences Between Star Trek and Star Wars 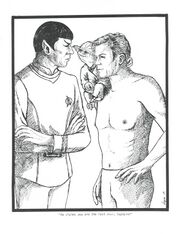 Fans often used humor to defuse the tension between Star Wars and Star Trek fandoms. This illustration from Galactic Discourse #4 (1983) showing Kirk explaining that he is the last Jedi is the first of two by Suzan Lovett for the "Scenes We’d Like To See" art portfolio. The second scene shows Spock peering down at Yoda and saying, "Really I don’t see the resemblance, doctor."

The Differences Between George Lucas and Gene Roddenberry's Roles: Fans coming from the Star Wars fandom had many expectations that Lucas would be the same sort of TPTB that Roddenberry had been, and in that, they were often disappointed with Lucas' lack of playfulness with his fandom and in his often seemingly outright hostility.

I suspect that may of SW fandom's problems with Lucasfilm over the years, whether the problems, have been real or in fandom's own mind, have stemmed from the lack of inside understanding of media fandom at Lucasfilm. Maureen Garrett is the first fan liaison to have made a real effort to understand media fandom, though her background, I believe, was as an SF fan. On the other hand, the problems have not all been on Lucasfilm's side. Organized SW fandom has wanted a special place in the spectrum of SW fandom, as organized ST fandom had in ST. Trouble is, the situations are not comparable. ST fandom spoiled many of us, in a way. ST fans were courted for a long time, since it became obvious that a dedicated and devoted fandom existed even after the show's cancellation. Organized ST fandom was never very large -- though larger than SW fandom, even at the latter's heyday but t was vocal and it wrote letters. And for a decade, it was the mechanism that kept ST alive... ST fans were integral to that resurrection -- at the left hand of God, so to speak... SW fandom has never been in that position. Organized SW fans were not, and are not, necessary to the original success and continued viability of SW... The viability of any future SW movies will be based on the success of the first three and George Lucas' overall reputation as a producer of megahits, not the devotion and vocal partisanship of a small group of fans. [5]

The Differences in the Topic of the Fandom Itself: Opinions about differences between the two fandoms include the claims that

The debate over the legitimacy of the Empire and the hero status of Darth Vader was the first Big Controversy in SW fandom. Those who supported the Empire were articulate writers, well-versed in history; more than one came from a military background and could argue the expediency of battle and politics with aplomb. Their letters and articles [in zines] shocked many fans. Responses to the radical notion that the Empire was legitimate came close to crossing the line between discourse and personal attack. Echoing in the disbelief that anyone could not simply accept the Alliance as the good guys was the dawning realization that the assumption of a logical unity that existed in ST fandom did not apply to SW fandom. Political opinions had begun to color fannish reactions, a development for which there were no established etiquette. While there had always been ST fans who felt the Klingons and especially the Romulans received bad press, the presumption that the Federation represented humanity at its best so far was fact or most fans. The Prime Directive as a good idea was accepted without too much question. Now, however, fandom was presented with a universe where human strove against human, allowing equal species time for radically different ideas. Added to that was the real time release of SW: after the end of the Vietnam War and its attendant protests; after the Watergate scandal that eventually force Richard Nixon out of the presidency; many years after the riotous days of the late 1960 and early 1970s. The idealism that had nurtured the popularity of ST was growing lean as American entered the Reagan years. The country, and even fandom, grew more conservative and more cynical. The argument of 'the end justifies the mean,' which barely existed in ST fandom, began to appear in discussion of the Empire and the Alliance. [7]