The relationship between the fandoms of Sherlock Holmes and Star Trek is a long one.

Comparisons of the great detective to Mr. Spock go clear back to John Boardman's essay "Intimations of Mr. Spock" in Spockanalia 3 (September 1968).

In 1976, Leonard Nimoy appeared in a Sherlock Holmes play which furthered fans' interest in the cross-pollination of the two universes. 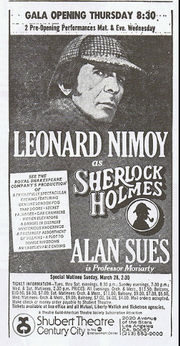 "Sherlock Holmes," the 1976 play, used as a photo reference for an illo in Menagerie, see below

The next major nod in Star Trek to Sherlock Holmes was in Star Trek: The Next Generation. There were many references to Sherlock Holmes in the show. In "Data's Day," Data first became aware of Holmes when Riker called Picard a private eye. In "Lonely Among Us," Data was introduced to the works of Arthur Conan Doyle by Captain Picard. In "The Big Goodbye," Geordi La Forge described Dixon Hill as a 20th century Sherlock Holmes.

Two episodes of TNG, "Elementary, Dear Data" and "Ship in a Bottle," focused on Data's admiration of the character of Holmes. In 1988, and then in 1993, "Data played the role of Holmes in a holodeck program, alongside La Forge in the role of Dr. Watson. La Forge, while accompanying Data and Katherine Pulaski on a challenge to solve a Holmes mystery he had not read, accidentally programmed the Moriarty hologram so well that it became self-aware and learned of its true existence, requesting the computer to create an adversary capable of defeating Data, rather than capable of defeating Holmes." [1]

Another major connection between the two fandoms was in the 1991 film The Undiscovered Country. Written and directed by Nicholas Meyer, who'd also written The Seven Percent Solution, it gave Spock this bit of dialogue: "When you have eliminated the impossible, everything that is left must be the truth", which he attributes to one of his ancestors. Since this is a quote from the Sherlock Holmes novel, The Sign of Four, it implies that Spock, and therefore his human mother, Amanda Grayson, are descendants either of Holmes or of his creator Arthur Conan Doyle.