There was a lot of cross-pollination and migration of Star Trek writers in the late 1970s and early 80s. There was much talk of the reasons why in the letterzine S and H. Some fans cited the in-fighting and rifts the slash/gen arguments in Star Trek fandom as a reason for making the move; many LoCs complained of the nastiness that had occurred in the pages of Interstat and constantly claimed this "new" fandom wouldn't fall into those pitfalls.

Some slash fans who had created fanworks in Star Trek enjoyed the challenge of translating the same sort of relationships to a contemporary time-frame, one without the "ease" of future speculation and the freedoms of time travel and aliens; m/m pairings several centuries in the future felt quite different than late '70s California.

Other fans disliked this difference between the shows, commenting that the future optimism regarding intimate relationships of Star Trek is what fueled their interests. Discussion and fiction featuring two characters in the distant future was easier to get one's head around than two cops who "lived" in present day. 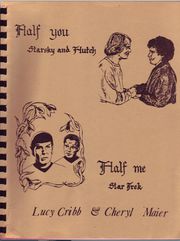 cover of the zine Half You, Half Me which had both ST and SH content

Please excuse the reference to Trek, but S&H fandom is a bastard child of Trek fandom. Without the talent polished and the experience gained by many S&H fans in Trek fandom, we probably would have a fandom. Also, Trek is older and has an established history which can be documented; S&H is too new. [2]

In 1985, a fan remembers her introduction to the fandom by way, of course, of zines:

My earliest memory of the fan lit is lying on Connie Faddis's carpet in 1977. paging over the second draft of "Mojave Crossing" and thinking, what the hell is this stuff? It wasn't science fiction and it sure wasn't Star Trek, not even the K/S version. (Yet.) But since a quantity of people I liked to talk with were hoofing over into this new fandom, it was either hoof with 'em or forever hold my peace. There followed the quarterly excursions to Pittsburgh and Chicago and Columbus to crank out (sometimes literally) the latest mimeo zine: ZEBRA THREE, ME & THEE I, ONE-SHOT. Our vocabularies acquired new words and phrases like "scrod". "corflu". and "Die, you bastard!" We o.d'd on butterfly sandwiches and contracted blood poisoning from paper-cuts. Best of all, we got to read the stories as fast as they flew out of the Gestetner. Those were the days. [3]

A fan in 1985 comments on what she perceived to be the narrowness of S and H fiction in comparison to ST fiction:

Something slightly unusual about S&H lit is the relative commonness of prequels, sequels, and remakes or "missing scenes" for other S&H stories and the original episodes. Possibly this is because there are fewer stories to be told about two men in one city than about, say, a shipful of folks in a galaxy. [4]

I also have to admit, with some embarrassment, that when I was in K/S, I (like many fellow K/Sers) looked down on other slash fandoms. Kirk and Spock was the only pairing that was... well... logical... in terms of the characters having genuine feelings of affection for each other that could realistically lead to slash (plus you have the 23rd century, where it's easy to make the argument that homosexual activity is no big deal). S&H had meant the world to me as a television series, but I had sampled some zines and they just didn't do much for me. Most stories seemed to have one character or the other as gay or bisexual, and it seemed impossible to have a 70's story without the 'gay thing' being an issue. It also seemed that most stories were full of cops n robbers plots (if there was any plot at all), and that also seemed inferior to the limitless science fiction realm of 'Star Trek'. Plus, the S&H h/c I'd sampled wasn't as good as watching h/c episodes. So, the fandom didn't do much for me at the time. I can't help but wonder how I might have felt differently if I'd read Suzan Lovett's novels back then. [5]

Most of the early SH fan writers came out of Star Trek fandom where they already had been producing very excellently written and edited zines with amazing artwork. There were certain kinds of fans, mostly women, who were mostly interested in the relationship aspect of Trek fandom, and in the hurt-comfort aspect of the relationships. Many of these fans were drawn to SH due to the intense relationship, and the hurt-comfort episodes. Many of the earliest writers can be found on the S&H Gen Archive -- Teri White, who had written in Trek, and eventually became a pro writer, was the first person to produce S&H stories that were put in zines, and shortly after other Trek writers and zine producers came into the fandom. At this point, everything was gen, though Trek had already produced the first slash stories and slash zines... So, it wasn't too long before some of the writers started exploring a slash relationship between S&H. Many of those first SH writers were Teri White, as I said, Connie Faddis, Jan Lindner, Dargelos, Karen B, and a number of writers who've gone on to the pro ranks. You can find a lot of the early writers in the Starsky and Hutch Archive, but there are many more who can't be found for archiving approval, or who don't wish to be archived. Early slash writers were people like Alexis Rogers, Terri Beckett & Chris Powers, Dargelos, Pamela Rose, Rosemary C., Billie Phillips, Peruvian Gypsy, Elizabeth Lowry, Cheryl M. and Lucy." [6]