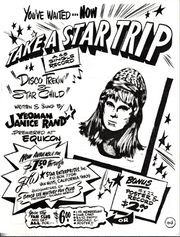 Janice Rand was a character during the first season of the original Star Trek. She appeared in the first eight episodes, notably as the woman the Mirror Kirk attacks and nearly rapes, the woman whom Charlie X gets a crush on, and the character whom Miri becomes jealous of, causing the landing party's betrayal. In her job as Yeoman, she also brings Jim Kirk meals and coffee.

It was suggested on the show that she and Jim Kirk had a romantic, if not intimate, relationship. Janice Rand abruptly disappeared from the show, causing many fans to write a number of speculative fictions as to why.

The character later returned as the Transporter Chief in Star Trek: The Motion Picture, but her estrangement from the crew was never addressed. She saw the damaged USS Enterprise return home in Star Trek III: The Search for Spock (credited as "Woman in Cafeteria"), and was a Chief Petty Officer on Earth in Star Trek IV: The Voyager Home. Rand became Sulu's Communications Officer and had been promoted to Lieutenant Commander on the USS Excelsior in Star Trek: The Undiscovered Country and the follow-up 30th anniversary episode Star Trek: Voyager episode, Flashback.

A Fan Ponders Time, and Hair

In 2013, a fan wondered about Rand's hair: "Time is passing and a lot of the people who were on fandom in the 60-70s no longer participate. I know that as a young person watching to a episodes that I am missing a lot of the original... Culture? Something is missed. For example, Rands beehive that everyone seems to hate (I think it's cool! So intricate!) Well I didn't even know it was a beehive! What were the implications of that hair style back then? Did it mean she was high class, snobby or smart or a valley girl?" [1]

From CCSTSG Enterprises #42 (1994): "Yeoman Rand's wig actually was two wigs woven together, making it a heavy piece to wear. "In 'The Enemy Within' I was holding onto the wig. I thought [when Kirk was chasing her around the cabin],'Oh god, it's gonna come off.'" [2]

Examples of Janice Rand in Art: By Year