For a list of other fanzines with this title, see Atavachron. 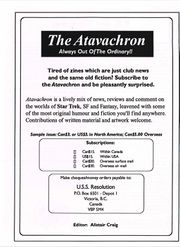 Atavachron is a newsletter that was published by the Star Trek fan club "U.S.S. Resolution NCC-1877," based in Victoria, British Columbia.

This fan club disbanded in 1995, two years after the last issue of its club zine.

Note: this is not the same Star Trek fan club, an older one also based in Victoria, British Columbia, the UFCST (The United Federation of Canadian Star Trekkers) which published the fanzine Trekkada.

The focus of the newsletter was Star Trek, but it had other science fiction and media content as well.

Many early issues were very much a club zine, full of content meant for its members. There was an emphasis on submitted fan-written personas which appeared to be then utilized in fanfiction. A fan in 1987, bothered by what he felt to be predictable and unrealistic descriptions wrote Character Reports: How NOT to Write Them. 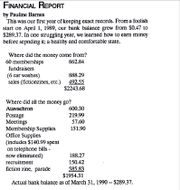 Later issues of the zine did not include fan personas and became much more general interest for Trek and science fiction fans.

The Atavachron took its name from the temporal device used on the planet Sarpeidon in the original Star Trek series, episode 'All Our Yesterdays.'[1]

From the Zine Wiki:

Contributors of art work included Warren Oddsson, and Jeffrey Taylor, among others. David Gordon MacDonald was also a co-editor of The Central Ganglion. In 1992, John W. Herbert began co-edited Under The Ozone Hole with Karl Johanson till 1996, winning the Aurora Award for Best Fanzine four times."[2] 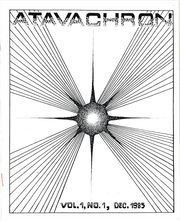 front cover of issue v.1 n.1: "The cover artwork of this "premier issue" of Atavachron was drawn by Ensign Donna Paton, Graphics Officer."

Well, here we are, only a short three months since we officially became a ship and already the first zine is out. It's surprising the amount of work it takes to put together a feasible club in such a short time, especially with such a diverse group of people.

Now that the hectic pace we set to prepare for Alternate Realities Day has died down we can get back to a more "normal" routine, writing and shore leave instead of making displays and preparing for competition. At least it has showed me how well my officers react under pressure. I would like to take this opportunity to issue comnendations to LTCMDRs Collins and Pelttari for their help in the past few months and to ENS Hipsey for writing the winning skit in the A.R. Day Masquerade.

I just hope that we can stay together and grow, it will be tough but I guess it's the hope and challenge of a brighter future that has brought us all here in the first place.

May the wind be at our backs.

"Rebuttal: To the City on the Edge of the Border":

This article is in response to a piece written by LTJG Terry Sherwood of the USS Kestral Shuttle Sally Ride (Kestral Log Vol. 3 No.4, Equulus log 8510.15). Sherwood said in his article that the new ST fiction isn't any good, that fans shouldn't care what Sulu or Uhura think or do when they're off duty, and any novel that mentions this isn't worth the paper it's printed on.

It is in the opinion of myself and my crew that most of the new ST novels are good novels and justly deserve to be called the "new Star Trek fiction". Anyone who has read and been entranced by Janet Kagan's "Uhura's Song" knows how good some of these stories can be. And where would we be without John Ford's skillful interpretation of a misunderstood people in "The Final Reflection"? He gave us an insight into the Klingons that makes us say "That's why they behave that way". The universe is made up of more than a few people. Uhura, Scotty et al must be worthy of attention, because they are valued by Kirk, McCoy and Spock.

Kirk turns to his former crew for help in ST III - and they respond. McCoy stays on after they've dealt with V'ger even though he was reactivated only for V'ger. And Spock sacrificed his life for the crew. Are these people really not worth knowing, when Kirk, McCoy and Spock seem to think they are? -- Captain St'lar 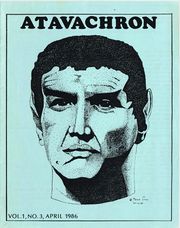 Atavachron 4 was published in June 1986 and contains 24 pages. 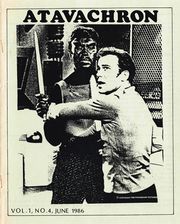 Atavachron 5 was published in August 1986 and contains 24 pages. 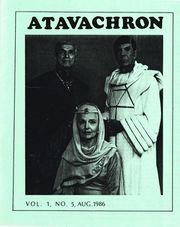 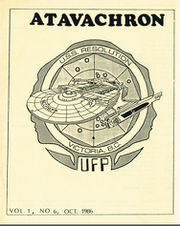 Some of the content is on gaming and role playing, with articles written "in character." 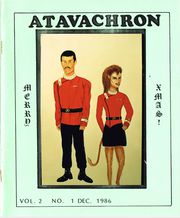 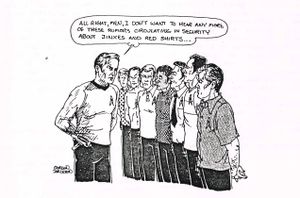 from v.2 n.1, Gordon Carleton, likely reprinted from another zine 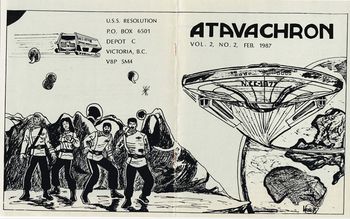 wraparound cover of issue v.2 n.2: "The cover for this issue of the Atavachron is something new for us. A full wrap around art cover featuring the RESOLUTION warping out of orbit on the front and a stylized landing party on back. Penned by Cadet Zachery Corsair."

It is noted that the fan club has "passed the 50 member mark." 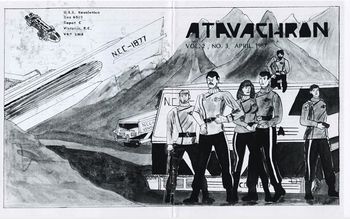 wraparound cover of issue v.2 n.3: "The cover artwork for this issue of Atavachron features the RESOLUTION crew in an exciting scene from our serial "Selena's Children, and was penned by LTJG. Zachery Corsair."

My God, I can't believe the change in just one issue! The ship has now over 70 members and our ad in Starlog hasn't even come out yet! I must admit that the great showing put on by our crew at Alternacon has a lot to do with it.

The editor was Terry Wyatt. 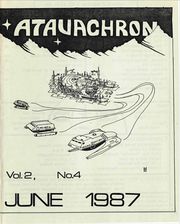 front cover of issue v.2 n.4: "An Eagle rushes to meet three of the Resolution's shuttles as they skim across the surface of Earth's errant moon. From Selena's Children. Art by Michael Shaudis." 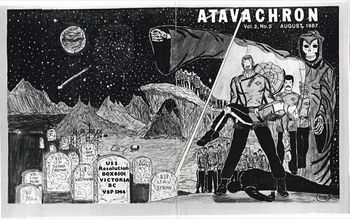 wraparound cover of issue v.2 n.5, Zachery Corsair: "Doctor MacGregor cradles a dead crew member while the rest of the crew mourns.. and Death awaits her next victim. From Se1ena's Children." 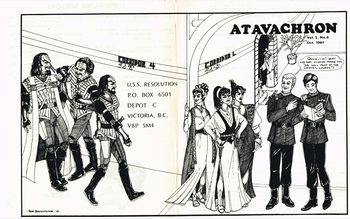 the wraparound cover of v.2 n.6, Betty Bigelow: "Looking for love in all the wrong places. The scene shows a group of Starfleet Officers just prior to six months of full-body traction."

The editor notes the fan club has 141 members.

Atavachron v.5 N.2 was published in Summer 1990. It contains 32 pages. The front cover is by Dan Cawsey, the back cover is by Warren Oddsson. There are sparse interior illos which are not generally credited. 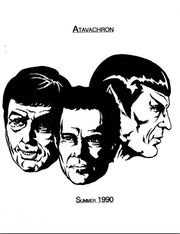 cover of v.5 n.2, a portrait of The Big Three by Dan Cawsey 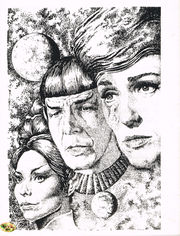 The single letter on page 24 is a long one and a call to fans to write more letters:

First, to all of you who have written letters to Paramount, thanks! They are listening. This communique is to update you with the latest information, given by Richard Arnold at a convention yesterday {Feb. 11, '90} in Palo Alto, California. Paramount Studios believes that the reasons Star Trek V failed were (1) the actors are getting too old, (2) Batman] blew Trek out of the water, and (3) we get enough Trek with the Next Generation and don't care about the original anymore.

Needless to say, the audience reaction to these pronouncements was emphatic and to the point!

Paramount's latest idea for Star Trek VI is a 'prequel' -- that is, a story about the characters during their Starfleet Academy days, casting young actors in the role. There is talk of making this a flashback story, with Shatner, Nimoy and the rest appearing only at the beginning and the end to frame the story. (Richard Arnold also stated that William Shatner and Leonard Nimoy have flatly refused to participate in such a project!)

An informal audience poll was taken, and here are the results. The vast majority of the audience felt that the problem with Star Trek V was the script. A few felt that Shatner's direction was at fault, and virtually no one felt the actors were at fault. Most of the audience would not go and see the film described above. About half would go and see a film set in the Academy with new characters. And, of course, everyone would go to see a film with the familiar characters played by the original actors!

In informal discussions, it seems that most fans believe the only way a prequel would succeed would be to wait until the original actors are no longer able or willing to do more movies themselves. And then, it would have to be done very carefully.

Because of the fans' response to the Star Trek VI question, there are enough letters coming into Paramount studios right now that they're thinking of hiring an extra person just to open the mail! What do you think? Shall we make them hire that extra person? Now that you know the latest, please write another letter!

Atavachron V.7 N.2 was published in Summer 1992 and contains 104 pages. It is the first issue edited by Alistair Craig. 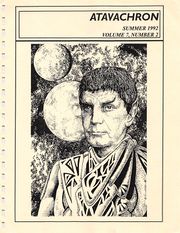 From the review of "Doctor Who's Free Flight," an anti-drug short film aimed at children 8-14 years old:

Unfortunately, it failed to generate much interest among the conventioneers.... Free Flight is divided in to three ten minute segments . Part 1: Sylvester McCoy as the Doctor takes a young boy named Ian on a journey to the past. The boy learns how an evil entity called the Drug Monster managed to entrap him m a lifestyle of drug addiction. Part 2: Ace takes the boy back to the present and reveals that drugs have hurt the boy’s relationship with his family and friends. Part 3: K-9 takes the boy into the future where he dies either by falling from a tall building while under the influence of drugs, or by overdosing, or from AIDS contracted from a dirty needle. The only thing I could compare this to is Toon Stars To The Rescue. Both announcements were directed to the same age group (8 to 14), but Free Flight is much more graphic. Various villains made famous through the Doctor Who series are on hand to terrorize the frightened protagonist. The last segment was particularly chilling. Imagine being forced off a building by a Dalek bent on your destruction. A Cyberman breaks the news of your death to your parents. Although these scenes are graphic, they do require a working knowledge of the Doctor Who universe in order to be most effective. This is probably why the special has not made it to North American markets.

In all, I was impressed with both the content and intent of the advertisement. It ended with a message by the Duchess of York (Fergie.) Older audiences will be tempted to dismiss this short film, but for members of the intended audience, it may prove most effective. A film like this bridges the worlds of fantasy and reality in such a way as to offer hope for our collective future; a timeless message delivered by the world’s most ‘timeless’ herald: Doctor Who! 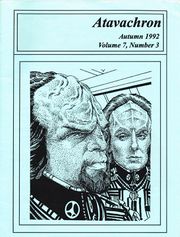 Warner Brothers Television has launched legal proceedings against Paramount Pictures. Warner alleges that Paramount stole the idea for Star Trek: Deep Space Nine from Warner's new show, Babylon 5. Both shows are remarkably similar: both take place on space stations in deep space at strategic locations, both plan to be "gritty" shows, both plan to have alien races figure prominently in their backstories, and both have numbers in their titles. Since Babylon 5 was first off the mark, it seems that Paramount could lose a tidy sum on this lawsuit.

According to Cinefantastique, David Gerrold won a sizable amount in his dispute with Gene Roddenberry and Star Trek: The Next Generation. The dispute dates back to the first season when Gerrold was brought in, with other "classic" Trek alumni writers, to help create the show. Gerrold wrote the show's first Writer's Guide, or "bible." Gerrold left the show after Roddenberry nixed his script "Blood and Fire," which featured two homosexual crewmembers as a subplot. He took Roddenberry and ST: TNG before the Writers' Guild for union infractions and his failure to receive proper accreditation for his work on the show. Dorothy Fontana also lodged similar complaints with the Writers' Guild. 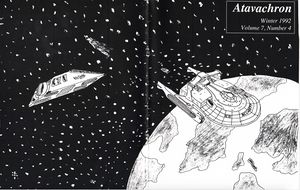 The art is by Jason Gauthier (covers), K. Alan McDougall, and Anne Davenport.