From an ad in Starfleet Communiqué: "This is the monthly Star Trek newsletter that challenges and informs. The latest hot news, in-depth features, Ferengi Awards, reviews, humor, and more!"

From the newsletter's header: "A compendium of news and views, aspiring to be monthly, with loving and irreverent looks at the Star Trek phenomenon and its faithful following."

CCSTSG Enterprises 18 was published in January 1992 and contains 10 pages. 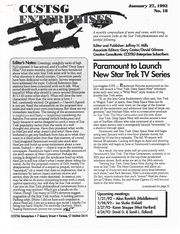 cover of issue #18
The editorial:

Greetings, unsightly sacks of high H20 content! It has arrived, and it's called "Deep Space Nine." For some months, many of us have fantasized about what the next Star Trek series will be like, and what elements it should contain. Convention panels have been dedicated to the subject. Survey responses have addressed the topic. Cultural Relevance class sessions have been consumed with such talk. What period should such a series use as a setting (prequel? sequel?) What ship should it center around (Enterprise B? C? E?, some other ship?). What will drive the new characters?

Now that the new series is here, I feel...cautiously excited. Or gypped — I haven't figured it out yet. Read the information on the proposed new series and reach your own conclusions. But these are my immediate reactions: The timing of the announcement is suspicious and hasty — suspicious considering the Babylon Five series proposal (which looks great) and hasty because it seems designed to catch a wave of Star Trek popularity rather than the result of a well thought-out process. Have they pondered what works in NexGen and what doesn't and why? Have they bothered to get any feedback from fans as to what they want in a third series (not that that matters, of course). I had imagined Paramount would take stock after NexGen and build up some excitement about a new series. Instead—plop! — there it was in the morning newspaper. Paramount hasn't even formally announced the sixth season of Next Generation! Perhaps the timing is designed to get the syndicates lined up while NexGen is still hot (that's what I mean about riding the wave). As for the proposed content of DS9, frankly I'm disappointed. Instead of a sequel or prequel, we have a "samequel," on a vessel that does no exploration, that is reactionary by nature (space stations receive and service, they do not create destinies). In essence, you may be able to do some interesting stories with a small, captive spacercity, but will they be Star Trek stories' Can you do Star Trek philosophical commentary from a revolving way station' Who's got a handle on the Vision Thing' Too many of DS9's elements suggest stagnation of the Star Trek mythos. A holding pattern. Parking orbit, [Note: I did not have such trepidation about NexGen; I am not a status quo purist] Maybe I'm being too hard. Maybe I'm excitedly cautious. Here's hoping Paramount proves me cynical.

CCSTSG Enterprises 19 was published in February 1992.

CCSTSG Enterprises 33 was published in April 1993 and contains 10 pages.

CCSTSG Enterprises 34 was published in May 1993.

CCSTSG Enterprises 42 was published in April 1994 and contains 12 pages. 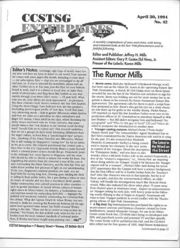 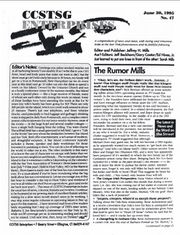 CCSTSG Enterprises 48 was published in August 1995 and contains 12 pages. 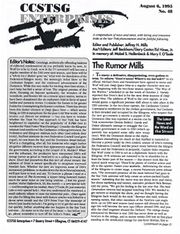 Way too many fanzines, fiction and non-, come from editors who are full of sweetness and light and ready to turn a flamethrower on anyone who isn't. Their version of Trek and its random might have come straight from The House at Pooh Corner, where, in the words of Dorothy Parker, "everything is hippity-hoppity." Such a zined's thoughts seem to run: "Hey, if it says 'Trek' on it somewhere, it's just hummy with me."

This is the attitude that births newsletters full of cute, rocket-ship shaped mazes and lame cartoons, those penpal lists, those reader bios (so you named your cat Saavik, you clever girlie, you), those blurry reprints from TV Guide, those photos ripped off from Starlog and so darkly repro'ed on the office copy machine that the one of Captain Sisko turns out on the second or third glance to be Jean-Luc Picard, those photocopied Kraft Marshmallow bags with the recipe for Trekkie Treats and the ad for the Mr. Spock Marshmallow Decanter.... ...all of which make for the impression that the zine in question is only one of the editor's hobbies, which also include fingerpainting and popsicle-stick crafts.

In contrast, wonderful contrast, CCSTSG Enterprises has a nice, hard, adult edge to it, which zined Jeff Mills has tempered with a whole holodeck full of humor. The first half of the title stands for Central Connecticut Star Trek Support Group, making it an even rarer avis: a clubzine that assumes its readers are capable of thinking for themselves. And each and every issue I've seen delivers exactly what its masthead promises: "news and views, with loving and irreverent looks at the Star Trek phenomenon and its faithful following."

Nowhere is the irreverent part more apparent than in the regularly featured Ferengi Awards. These recognize "blatant, shameful, deceptive or distasteful employment of Greed in the hawking of Star Trek merchandise and services to fans." A prime example, from Double Issue 45/46, takes aim at Jimmy Doohan and the "Own a Piece of History" Campaign, which encourages any fan with $125.00 just sitting around to buy a two-inch by four-inch piece of the actual kilt Scotty wore in "The Savage Curtain." To quote Jeff Mills: "What's next? Shards of the scotch bottle he drank from in 'By Any Other Name?' Better act fast... there are only 1,000 pieces in the collection (surely he could have cut them smaller!)"

To the fan tempted to sign up for the Star Trek MasterCard, he suggests: "Carry a two-inch by three-inch glossy picture of the Enterprise in your wallet. Have it laminated, even. Then, every time you make a credit card purchase, pull out the starship picture along with your fee-free MasterCard. Show the cashier clerk if you like, and the people behind you in line." It's really true: in California, everyone and his channeler knows someone in show business. Even so, I find "The Rumor Mills," another of CCSTSG Enterprises' regular features, one informative read. Every issue has lots and lots to offer as to what new Trek items are on the market, where the Trek actors are appearing, and Who said What to Whom. This can include anything from hard news to tasty gossip. Again, from issue 45/46: "Jonathan Frakes said Patrick Stewart is known to mutter, 'Jonathan—twenty-five years with the RSC to end up doing this!'"

Salted among the more-or-less regular stuff are lots of sidebars, blurbs, bits, and pieces: A review of Star Trek VI here, the "Top Ten Reasons to Retire the Original Star Trek Crew for Good" there. Yes, Jeff does run reprints, but they tend to be brief little beasties that don't overwhelm the zine and drown the edge in the voice of its editor. Most of the coverage goes to the two Treks still on the air, DS9 and Voyager, but the other incarnations, Classic, Next Gen, and the movies, aren't ignored.

Six monthly issues go for a mere $9.00, and each is packed—packed!—with goodies. I can't remember the last time I saw this great a buy in fannish commercial circles. No Ferengi Award for this puppy. And no Pooh Bear Award, either. If Marty would allow it, CCSTSG Enterprises would get an extra baobab or sequoia just for encouraging fandom to stop and think when confronted with all those glossy ads for Star Trek stuff. For telling the fans, in other words, that just because Paramount or the Franklin Mint rings the bell, they don't have to drool. [1]