Voayger was published by the Bristol Starfleet Registry (later British Science Fiction Review). There are 38 (at least) issues and one special edition.

The zine started out as a club newsletter [1] but later morphed into something with a much broader scope.

The Slide to a Sort-Of Official Status

This zine is an example of a fan work that began as a purely amateur work and became very slick. In about 1992, the number of copies printed had more than quadrupled, the covers were glossy, the number of honorary club members had jumped from a handful to more than thirty, and the club stopped publishing fiction zines and advertising old issues of their zines. The zine also acquired a full-team of production assistants and writers and had an increasing amount of official photos, interviews, and materials from TPTB.

A note on the table of contents states that it was an "international non-profit making fan club for fans of the Star Trek series and films."

Voyager 1 was published in December 1982.

Voyager 3 was published in September 1983.

Voyager 4 was published in December 1983.

Voyager 5 was published in March 1984 and contains 24 pages. 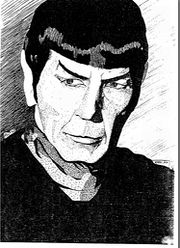 back cover of issue #5, Maggie Symon 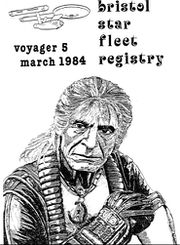 Voyager 7 was published in September 1984 and contains 46 pages. 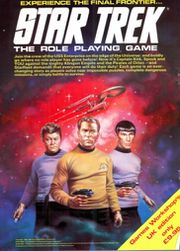 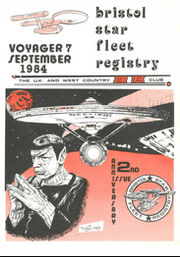 Voyager 8 was published in December 1984.

Highlights -- for other content, see the table of contents image 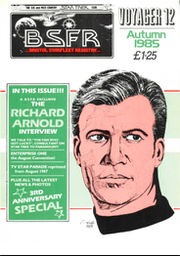 You must have asked yourself by now, 'I thought this was supposed to be Voyager 11. Have I missed an issue? Well ... no you haven't. Truth be told, between you, me, Allister and his printer, some confusion arose and 11 became 12 on the cover. It's too expensive to correct (and it is a lovely cover apart from that) so we're going to go along with it and the next issue, due out for Christmas, will be Vovager 13. Confused ...? You're not the only one!

Voyager 17 was published in January 1987 and contains 54 pages. There were 300 copies printed.

BSFR Newsletter 21 was published in Summer 1988 and contains 60 pages. There were 450 copies printed.

Voyager 31 was published in Summer 1993 and contains 54 pages. There were 1000 copies printed. The number of honorary members has jumped from a handful to about 25.

Voyager 34 was published December 1994 and contains 60 pages. There were 1100 copies printed. The number of honorary members has jumped to about 30.

The Best of Voyager was published in August 1986 and is 72 pages long. It contains material from the first six issues. 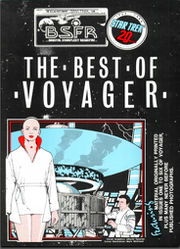 cover of "Best of Issue"
From the flyer:

It is with considerable pride that we present to you this, the BEST OF VOYAGER. VOYAGER is the quarterly magazine of BSFR, the Bristol Star Fleet Registry, and in the four years that we have been running the club, we have seen it grow into one of the major British Star Trek clubs. The material contained herein was originally presented to BSFR members between Christmas 1982 and Summer 1984. Since that time our membership has trebled and it seems to be the perfect time to prepare this collection for you. Some of you will already own some, or indeed all, of the issues concerned. We hope that you will still find the work interesting and refreshing. We have completely re-set the work and have included a large number of brand new photos. Whether you're new to BSFR, or a friend of long standing, we strongly urge you to put the TV off, put the kettle on, and take the time to get acquainted. We think you'll find that it's worth it!