Trexperts is a Canadian Star Trek newsletter and letterzine that, as of August 2011, has 161 issues. For many years, it was a monthly publication, and then switched to being issued six times a year. From a 1994 flyer:

This letterzine is rare in that it rarely printed fans' street address, sometimes including only their city of residence, something that was bit of an anomaly at the time.

The letterzine is also remarkably wank and conflict free and is completely "family-friendly" in its discussion of sex (or more specifically, almost complete lack thereof). According some readers, there is little discussion of fanfic, other than comments on the fiction contained in the publication itself, and there is no discussion or mention of zines. Others disagree saying that fiction and zines have been mentioned often over the years.[1] 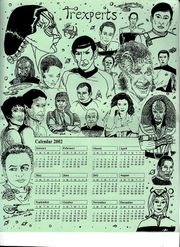