Archives' Log is a Star Trek: TOS newsletter of the Star Trek Archives, a fan club out of San Francisco.

The newsletter began with the name "S.T.V.A. Newsletter" and its first two issues had this title. In the third issue, there was an announcement that the fan club had changed its name from "Star Trek Video Archives" to "Star Trek Archives." While there is no mention of a change for the newsletter, that is when the title change occurred.

Like some newsletters of that era, earlier issues were published without the required pre-1989 copyright notices, possibly placing the fanzine in the public domain. 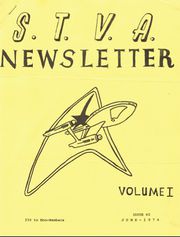 The editor wrote: "At the last meeting in May, we will discuss beginning our members only policy for attendance. This would mean that visitors would be allowed to attend as guests for three times, then we would request that they become members. We are having a space problem and especially a problem with the contributions jar which is passed around. It seems only members have been contributing lately which does not help out our bank account very well. We have two expensive projects going at the moment: Project Communicator is the most expensive and then this newsletter is not exactly free to put out either. If we want to improve the quality and professionalism of our projects, we will have to have more funds."

Also: "WOULD YOU LIKE TO SEE YOUR NAME IN PRINT --- WE WOULD LIKE TO GET SOME ARTICLES FROM OTHER MEMBERS WHO HAVE NOT CONTRIBUTED YET. DON'T WORRY ABOUT SIZE, THE TYPIST HAS A LOT OF STENCILS AND PEPSI TO KEEP HER GOING."

Archives' Log v.1 n.3 was published in July 1974 and contains 12 pages. The front cover is by Karin Giblin.

Some news from the editor: "We have obtained exempt status as a civic league (like the Elks) from the state of California and are making a similar application to the Federal Government."

And: "We have written to Ricardo Montalban who played Khan in 'Space Seed' to ask him to come and visit us when he is in town doing 'The King and I.' If he is not able to do that, perhaps he could give us a taped interview."

And: The club announces they are going to have a con called The Red Hour. It will be a one-day "ST festival for the Bay Area in October. We will be showing ST episodes (16 mm), have a fashion show, computer games, huckster tables, food and perhaps guests."

Archives' Log v.1 n.4 was published in August 1974. The front cover is by Karin Giblin.

Archives' Log v.1 n.5 was published in September 1974 and contains 11 pages. The front cover is by Karin Giblin.

Archives' Log v.1 n.6 was published in October 1974 and contains 14 pages. The front cover is by Karin Giblin.

The editor writes: "AREN'T YOU SORRY YOU WERE NOT AT THE AUGUST 27 MEETING? On August 27 we were paid a surprise visit by James Doohan. Mr. Doohan had been working with Steve Lampen at this recording studio and dropped by for a few minutes to discuss our project of producing Star Trek tapes for the blind. He stressed that me must have iron-clad security for these tapes to make sure they will only go to the blind. Mr. Doohan also autographed a copy of the July issue of the Archives Log which has since been framed and can be seen in the Library."

Archives' Log v.1 n.7 was published in November 1974 and contains 14 pages. The front cover is by Karin Giblin.

Archives' Log v.1 n.8 was published in December 1974 and contains 15 pages. The front cover is by Karin Giblin.

Archives' Log v.2 n.1 was published in January 1975 and contains 10 pages. The front cover is by Carol Witham. 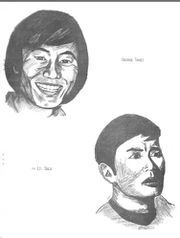 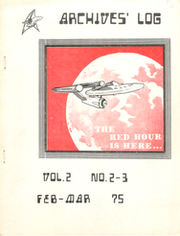 The Log has an extensive interview with Bruce Hyde, which was done while he was at the Eureka Theatre. A very, very extensively researched and nicely writ ten article called "Wolf Ripper" by Albert Hillard-Hughes is included. It begins and ends with the Star Trek episode "Wolf in the Fold", and takes us on a very interesting path through the lore of Jack the Ripper. Franz Joseph, as United Federation Representative of Star Fleet Command, sends memos on replacement of personnel in Starfleet (and slaps Kirk's hand for losing so many crewmen all over the place. And why does Kirk keep asking for all those female yeomen. Tsk! The reproduction really brings out the excellent cover of "Gem", by John McLaughlin. A nicely done zine, well worth the price. The LOG has taken a leap forward in appearance with this issue (mostly due to a new editorial assistant, Evelyn the Editor tells me)! A good, sharp, neatly typed, 2-column reduced format, with much better layout work. I'm very impressed — ARCHIVES' LOG is now the best-looking amateur Star Trek fan publication, bar none! [3]

back of v.2 n.4, a photo montage from The Red Hour Festival 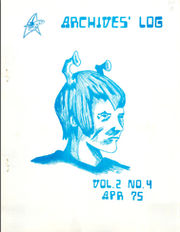 cover of v.2 n.4, illustration of an Andorian by Carol Witham (the credit was handwritten in a margin on page #13)

Star Trek Archives has Just weathered a crisis, during which two officers and several members resigned from the organization. The very fact that this issue of the Log is in your hands proves that the Archives is now strong enough to withstand such a problem. The needs of the membership and efforts such as Project Communicator are more important than personalities.

It is time for all members, regardless of their personal opinions, to close ranks and once again move Star Trek Archives ahead. We must, we can, and we will do so. 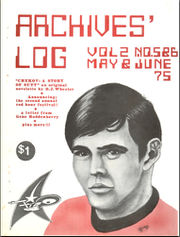 Archives' Log v.2 n.7 was published in July 1975 and contains 28 pages. The front cover is by D. McCarthy. Interior illos by Bonita Frank, Frank Torrano, and Deirdre McCarthy. This issue lists the "Advisory Board" as consisting of Bjo Trimble, Jacqueline Lichtenberg, Billy West, and Bob Wilkins.

The resignation of Art Canfil from the presidency of Star Trek Archives left a void which needed filling. Rather than refill that void with one person, the membership elected to have a thirteen member Board which, as a whole, would have the executive powers held previously by the president only.

At some recent point, the zine got an "advisory board"—members at this point were Bjo Trimble, Jacqueline Lichtenberg, Billy West, and Bob Wilkins. 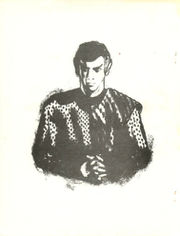 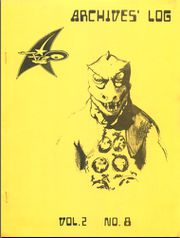 Archives' Log v.2 n.9 was published in September 1975 and contains 18 pages. The advisory board: Bjo Trimble and Bob Wilkins. 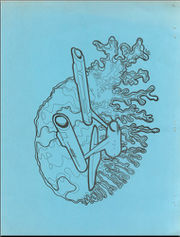 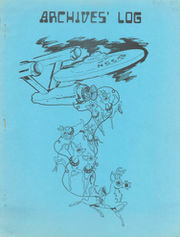 A wide variety of material can be found within the pages of ARCHIVE'S LOG. From Star Trek to Science Fiction, to hard science. The basis is still quite Star Trek, as can be seen by looking at the lovely cover by Jonesy Parrinello, In fact, while layout has improved little oyer earlier issues, the increaaing contributions by professional illustrator Jonesy have classed-up ARCHIVE'S LOG quite a bit. The major feature of this issue is the lengthy "Shakespeare in Outer Space" by A, Hilliard-Hughes. This is a sophisticated study of the film "Forbidden Planet" comparing it to Bill Shakespeare's "The Tempest." The piece is very competent in terms of keeping the reader from getthg lost even though he may not be familiar with either the film or the play. ARCHIVE'S LOG is an enjoyable and regular little fanzine. I look forward to each new issue.[4]

Archives' Log v.3 n.3/4 was published in March/April 1976 and contains 40 pages. The froth cover is by J. McLaughlin. Interior illos are by A. Frevele.

This zine has a pleasant, professional-style layout. It is illustrated mostly by photos from ST and has only one fan-drawn interior illo and cartoon strip. The cover is a nice drawing of Gem done by John McLaughlin. There are four major pieces in this issue: two stories and two articles. The first story is a Spock-saves-the-day tale by Steve Schenkofsky; he has a good handling of dialog and movement in the story, but motivation is a little poorly done. In this story, the Enterprise is sent after yet another 'villainous' thingamaob in space that has done in yet another Federation starship. The Enterprise fails to deter or destroy the ship. Then Spock, failing to even mention the telepathic information he has received from the lone alien in the ship, steals a shuttle from the Enterprise to go into the alien ship to put things to right. The reasoning (that only a man who can control his emotions can fix the situation) does not excuse Spock's behavior. The other story is a the-big-E-is-for-real story called 'Return of the Frontier' by Art Canfil It's unusual in that the crew of the Enterprise is cloned from the actors who played in ST and the Enterprise is built by the group who carried out the cloning! The writing is about on par with the other story. Also, AL has an interview with Bruce Hyde (Kevin Reilly in ST) which covers some of his background in acting... about his feelings about work and people on ST, and how he got into the ST con merry-go-round. And, lastly, there is an article on including 'Wolf in the Fold.' In the intro to AL it is said that part of AL's purpose is to 'promote artistic and literary creativity.' There certainly is talent connected with this zine. And it's a zine that many ST fans would enjoy.[5]