Fictional Languages are commonly used in science fiction and fantasy to add depth and verisimilitude to fictional worlds; they can range from a few words and phrases to entire languages complete with grammar and slang. Fans who often take fictional languages further: studying them, learning to speak and write them, or expanding on the minimal syntax and vocabulary from canon. Clubs, language institutes, conventions, zines and journals can all have a fannish focus on fictional languages.

Some fandoms that have an extensive fictional language component:

Some print fanworks and web sites that focus on fictional languages: 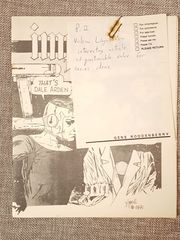 a copy of Impulse #5's front cover (1971) showing a note either from Gene Roddenberry or to Gene Roddenberry regarding the Vulcan linguistics article by Jacqueline Lichtenberg (This copy of issue #5 was sold in 2015 on eBay as part of Gene Roddenberry's personal collection and included a Certificate of Authenticity.)

People who create languages as a hobby generally refer to these as "ConLangs" (constructed languages).[1]

Various conlang groups exist within science fiction fandom, within other fandoms, and outside of fandom. The livejournal community 'conlangs' is one place conlangers organize. The Language Creation Society has a website for those interested in conlangs.

Klingon and Tolkien's Quenya and Sindarin Elvish languages are two of the most commonly studied fictional languages. Other languages from Star Trek are also frequently studied.

Livejournal includes a number of communities for learning fictional languages, including Gen-lis Vuhlkansu for Vulcan and tlhIngan Hol for Klingon.

Are there fictional languages in non-English sources that people study?