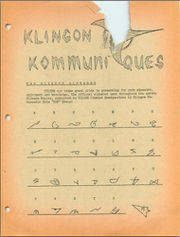 from 1969, an example of a fan's depiction of the Klingon alphabet (Anti-Matter #3 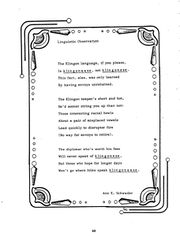 a poem about the Klingon language, printed in More Missions, More Myths #8 (1987) -- -- "The Klingon language, if you please, Is klingonaase , not klingonese. This fact, alas, was only learned By having envoys unreturned. The Klingon temper's short and hot, He'd sooner string you up than not: Those interesting racial howls About a pair of misplaced vowels Lead quickly to disruptor fire (No way for envoys to retire). The diplomat who's worth his fees Will never speak of klingonese , But those who hope for longer days Won't go where folks speak klingonaas."

The first film, Star Trek: The Motion Picture, marked the first time the language had been heard on screen; in all previous appearances, Klingons spoke in English. However, it wasn't until the third film that linguist Marc Okrand was hired to develop the language. Okrand then published the reference book The Klingon Dictionary, which in addition to the dictionary includes pronunciation and grammar guides and a list of "useful" phrases like Do'Ha (That is unfortunate) and qaStaHvIS wa' ram loS SaD Hugh SIjlaH qetbogh loD (Four thousand throats may be cut in one night by a running man).

It is a point of contention among Klingonists as to what level of fannish interpretation and creation in Klingonese is permissible. Some people feel only words and grammatical forms introduced by its original creator, Marc Okrand, are considered proper Klingon. Others feel that language is fluid and is as alive as the people who use and speak it.

Some episodes of Star Trek: Discovery have featured whole scenes heavy with Klingon language dialog, and these segments are subtitled in English. Fans who know the Klingon language can use their download service to select closed captions in Klingonese for whole episodes.

Some fannish activities focusing on the Klingon Language

Some print fanworks that focus on the Klingon language