You may be looking for the slash Star Trek TOS zine Matter/Antimatter.

Anti-Matter is a gen Star Trek: TOS anthology edited by Carol Lee. It had at least four issues.

From the editorial: "Official Journal of the Interplanetary Legion of Space Kooks. Dedicated to Star Trek bad guys, the overthrow of Star Fleet, subversive space activity, science fiction evil doers, terrible monsters, outer space buffs, and ridiculous projects... Most humble apologies for the entire club for the lateness of this ish. Printing was delayed while your astute Commandant went to the library to find out how to cut a mimeograph stencil. If this ish looks sort of strange, I'll try harder next time. Thank ghod for Cor-Flu!"

A Newsletter to Fill the Publishing Gap

Anti-Matter 1 was published in September 1968 (second printing: December 1968, third printing: February 1969) and contains 13 pages. The theme was "The Legionaire's [sic] Handbook," and its content is mostly clubzine rules and proposed plans for the zine's future issues. 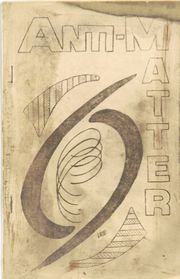 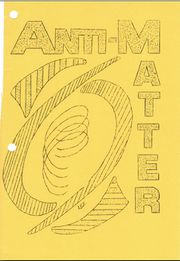 cover of the first issue, third edition, the editor adds to this edition: "Congratulations! You are one of the first TILOSK members to receive a copy of our new mimeographed handbook. All previous copies have been carbon copied."

Anti-Matter 2 was published in December 1968 and contains 24 pages. The theme of the zine is "The Winter Mobilization to Save Star Trek from Cancellation." Contributors are Jonnie Huberman, Elizabeth Sheridan, Flutnick, Sylvia Stanczyk, Laurie Wilcox, and Jari Lynn Wood. 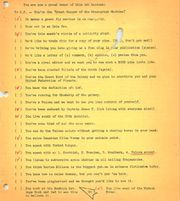 You are Receiving this Zine Because page, which this zine called "Excuses" 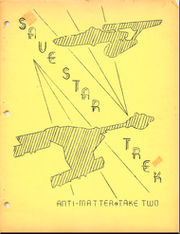 Anti-Matter 3 was published in March 1969 and contains 64 pages. This issue contains one of the only con reports for Star Trek Con. 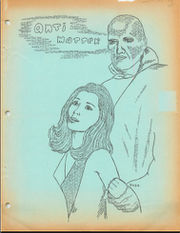 This issue contains a fairly subversive letter by Gene Roddenberry, in which among other things, figures that Star Trek will be cancelled:

The whole thing [this zine] sounds totally illogical plus admittedly subversive. Probably immoral too. Therefore I consider it a great honor to accept a membership in TILOSK as Commander of the NBC Peacock Pluckers squadron. The fact this membership is free makes it doubly delightful. I would appreciate it more only if I could have somehow stolen it. Thank you and all the members for your hard work on behalf of STAR TREK in the past and in this winter's mobilization to save STAR TREK from cancellation. My own guess is that it will be cancelled, although a sufficient campaign plus high enough summer rerun Nielsens could possibly shake NBC up enough to order it brought back mid-season (January, 1970). Who knows? Maybe the fans will win again. Or maybe NBC simply feels it cannot afford to give in again and start a dangerous precedent of giving TV viewers what they want to see. I can certainly understand the network's position on this. You start that sort of thing and the next you know people will begin practicing what they preach, some nut somewhere will begin believing that happiness is better than money, the average man will start listening to those nuts who say that war isn't manly and glorious, someone will start feeding the undernourished despite the proven fact it can lead to high colestrol [sic] and heart attacks, and first thing you know the streets will be full of earth kooks as nutty as you space kooks. Reference my rewriting of Harlan Ellison. His last public statement was that I am the type of person who would rewrite the Bible. Therefore, he has decided not to send me a copy when he has completed writing it.

From the Makers of the Galaxy's Largest: 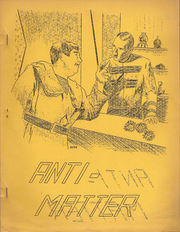 The theme of this issue was "TRIBBLE MADNESS!"

This, the most over-due fanzine in print, is humbly dedicated to:

GENE RODDENBERRY - a fan's best friend.
DAVID GERROLD - whom we hope won't sue us.
ROBERT A. HEINLEIN and his MARTIAN FLAT CATS - who started it all.
L.E. WALLACE, JR. - for resurrecting STAR TREK!'.'.
RUTH BERMAN - because she IS.
SYLVIA STANCZYK - Tilosk's official, award winning BEM.
LAURA BASTA, KATHY PHELPS, and all the CONTRIBUTORS who waited 2-1/2 years to see their names in print and now wonder why.
CASPER - who glued the brain cell to our hotel room celling at Lunacon.
W.J.C. - who didn't answer our letter, but whom we love just the same.
And last but not least, our beloved: "COMPETITION!"

The editor calls it the "most over-due fanzine in print" and comments that several fans have waited two and half years to see their names in print in it. It was originally meant to be published in April 1969. In the zine's editorial, Lee says that a fan suggested she call this issue #6 and tell people that issues four and five had been lost in the mail.

The editor writes: "And now that this issue is finally printed, I sincerely hope the staples don't fall out. Half the zines I receive fall apart before I take them out of their envelops, so lots of luck with this beastie. According to Finagle's law, they should pop loose just as you turn the page."

The editor writes of the next issue which was supposed to have a Klingon theme, but "Anti-Matter" #4 was the last issue published.

The werewolves sllnk
the vampires roam.
The ghosts rattle their chains and groan.
Where is Anti-Matter number four!?
Has she thrown it out the door? -- Linda Schad