Spock's Scribes was published in Winter 1969 (around the Xmas holidays; it includes a letter dated Nov. 24, 1969, that was "received yesterday".) It contains 34 pages -- 30 numbered, plus 2 double-sided sheets inserted; one at the beginning and after p. 16).

On the cover: "I LOVE PARIS in the SPRINGTIME. I LOVE PARIS IN THE FALL" and an illo of Tom Paris, the character Nimoy portrayed in Mission Impossible. It also includes "HIGHLY ILLOGICAL," and a illo of Spock.

Spock's Scribes was published in August or September 1971 and contains 53 pages. 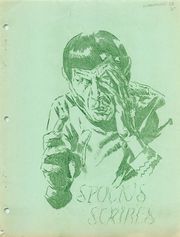 cover of the August or September 1971 issue

Spock's Scribes was published in November 1972. It contains 60 pages. 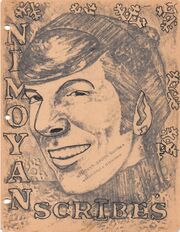 cover of the November 1972 issue

Note: There are multiple errors in the listed table of contents.