Star Date 3113.7 is a Star Trek: TOS play written by L.E. Wallace and shown at the The Denham Springs Community Theatre in Louisiana.

The play was produced with the knowledge and approval of Gene Roddenberry. Portions of the play were filmed and the audio was also recorded.

The play's script was reproduced in a 1971 issue of Spock's Scribes, and then much later in NCC-1701.

It was Wallace's first play. From Star Trek Lives! (which gets the title wrong): "It [Stardate 7113.7] was followed by Romulan Encounter, which continued the first play's innovative combination of stage and film techniques, using previously prepared film as if it were the main view-screen on the bridge stage set."

L.E. Wallace writes that he chose the play's title (which is the date of the second log entry in 'Tomorrow is Yesterday') to emphasize the relevance of his theme (to oversimplify: the importance of setting one's own values, and accepting the unpleasant along with the pleasurable) to life in the 20th century. [1]

In its April 1971 issue, Deck 6 had this report: "Star Date 3113.7 ran for only three nights in a 150-seat theater, yet it happened to attract a total audience of nearly 500 people. This meant standing room only for each of the three performances, which makes Star Date 3113.7 the Denham Springs Community Theater's most successful presentation to date." 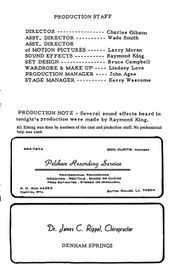 We have received your address through the courtesy of Mrs, Bjo Trimble and would like to bring to your attention a project we hope you will find interesting. The Denham Springs Community Theater is now in its third week of production of a two-act play based on the "Star Trek" series. It was written by Mr. L. E. Wallace, Jr., director of the Theater. A majority of the news media in Denham Sprinps and Baton Rouge (located 10 miles east of Denham Springs) have expressed their willingness to publicize our play and help us in any way. Six Louisiana State University students are participating in the play and there is considerable interest around the Baton Rouge campus. The play is set for production sometime in the month of March.

We believe this to be the first time any production of this sort has been organized, but we would like to know if you have any knowledge of another production like this... We would also like the address of the publisher of Star Trek Magazine... We have written Danielle Dabbs in Bryan, Texas and are awaiting a reply. Any other Information or advice would be greatly appreciated. 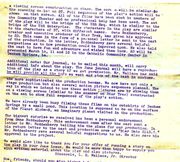 ...The play is a take-off on the tv program Star Trek. SD was written by L.S. Wallace, Jr. of Baton Rouge, director of the theater, Wallace, however, is not directing this production. Charles Gibson, also of Baton Rouge, is handling this position. SD Is a combination stage production and motion picture. The way in which the motion picture sequences will be shown is thru the use of a viewing screen construction on stage. The screen will be similar to the scanning device on ST. Full sequences of the play's action will be shown on that screen. All of the films has been shot by members of the Community Theater and no professional help has been used. The set of the play will be the bridge of the USS Esq. which is similar to the bridge of the USS Enterprise. The characters in the play are similar to the characters of ST, with different names. Gene Roddenberry, creator and executive producer of Star Trek, has given his approval to SD, This came in the form of a personal letter he sent to the cast of the production. In the letter, Roddenberry gave several helpful suggestions as to how production could be improved upon. He also told the cast to have fun and adventure and wished them luck. SD will be presented March 10, 11 and 12 In the Catholic Community Center In Denham Springs, La.

Additional note: Our journal, to be mailed this month, will carry additional info about the play. The June journal will have a reproduction of the play as a story if we get permission. Mr. Wallace has said he will provide all the info we want and pics of the cast In costume.

[Missing words] the more sophisticated the production became. We now have not only a stage production but also several motion picture sequences planned. The way in which we intend to use these motion pictures are by showing them on a viewing screen (similar to the scanner on Star Trek) constructed on the set to show full sequences of the play's action.

We have already been busy filming these films on the outskirts of Denham Springs by a small pond. This location is supposed to be on the surface of the Planet Alpha-8, an imaginary planet visited in the production.

First off, some follow-up coverage of the ST event of the year. "Star Date 3113.7" ran for only three nights in a 150-seat theater, yet it managed to attract a total audience of nearly 700 people. This meant standing room only for each of the three performances, which makes "Star Date 3113.7" the Denham Springs Community Theater's most successful presentation to date; director Charles Gibson speculates that the play could easily have drawn audiences for a second week. Interest in STAR TREK is obviously still very much alive.

Author L.E. Wallace, Jr., took the role of Kristopher James, Captain of the Starship ESQUIRE. Mr. Ohms (played by Bruce Campbell) was the ESQUIRE's counterpart of Mr. Spock, and Dr. Mason Powell (Don Curtis) was suitably McCoy-ish, right down to the Southern accent (of course, the entire crew had Southern accents). Other characters corresponded more loosely to the ENTERPRISE personnel: in fact, the Chief Engineer and Helmsman were played by women (Jo Karen Friedman and Gail Clark).

In order to provide a planet setting without cumbersome set changes, the main view screen was used to show several scenes to both the ship's crew and the audience. The set was a simplified, adapted-for-stage version of the. familiar starship bridge, with the various stations (including helm and navigation) ranged in a half-circle behind the Captain's chair, and the main view screen on the rear wall. Planet-side sequences were filmed locally with a super-8 sound-on-film home movie camera.

Special mention should be made of Raymond King, who produced most of the sound effects (including the familiar-sounding transporter hum) on an organ. For those of us who couldn't make it to Denham Springs, tapes of the play are available; see the ad page.

Local publicity for the play included a half-page article with photos in the Baton Rouge SUNDAY ADVOCATE (7 Mar 71, p 4-E), spot announcements on the Baton Rouge NBC affiliate WBRZ before and after STAR TREK, and a ten-minute interview on the same station.

L. E. Wallace writes that he chose the play's title (which is the date of the second log entry in "Tomorrow Is Yesterday") to emphasize the relevance of his theme (to oversimplify; the importance of setting one's own values, and of accepting the unpleasant along with the pleasurable) to life in the 20th Century.

Student or community groups wishing to produce "Star Date 3113.7" (on a non-profit basis) may contact Wallace at Box 52996, Baton Rouge, LA 70505. Better yet, write your own! The STAR TREK universe contains far too many possibilities to have been covered in 79 episodes. 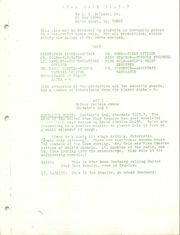 from the August or September 1971 issue of Spock's Scribes, the first page of Star Date 3113.7
In its July 1971 issue, T-Negative had this report from L.E. Wallace, Jr., director Denham Springs Community Theater:

On March 10, 11, 12, the Denham Springs Community Theater presented Star Date 3113.7 in a two-act Star-Trek-like drama... Charles Gibson directed. The play was a combination of stage production and motion picture. The motion picture sequences were shown through the use of a viewing screen constructed on stage (similar to the scanning device on 'Star Trek'). All of the film were shot by members of the community theater, and no professional help was used. The set of the play was the bridge of the Star Ship Esquire, which was similar to the bridge of the Star Ship Enterprise. The characters in the play were similar to those on the show, but with different names (Captain Kristopher James, played by L.E. Wallace, First Officer Mr. Ohms, Dr. Mason Powell, etc.)... The play was presented in the Catholic Community Center in Denham Springs, with has a seating capacity of 150 people. Somehow we managed to get nearly 700 people in to see the show on a standing room basis for all three performances.") Wallace adds that tape recordings of the play were available for $6.95 and, when ordering, to state whether the tape recording is to be stereo or monaural.

Gene Roddenberry gave his approval to the project. His letter, in part, said: "I have no objection to plays similar to Star Trek or even identical to Star Trek if done by students or community groups on a non profit basis as long as appropriate credit is given to the source material and individuals. Or as long as the production remains a community theatre venture, I have no objection to it involving some profit as long as that profit is used in the interest of that community theatre program. Good luck in your production."